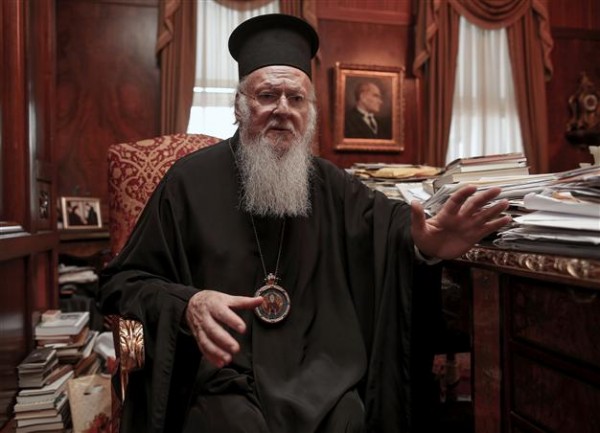 In an interview with The Associated Press in his Istanbul office, Bartholomew expressed disappointment that Erdoğan had not re-opened the Theological School of Halki, the Orthodox Church’s most important seminary.

Bartholomew had himself spent seven years as a student and another four more as an assistant to the dean at the grounds on an island in the sea of Marmara. The school, whose doors were closed in 1971 under a Turkish law that required private higher education to be controlled by the state, have been meticulously maintained since, in case students are allowed to return. Many expected that the seminary would be reopened last year as part of a package of reforms aimed at boosting minority rights in Turkey.

“These are hopes which are not fulfilled so far,” Bartholomew said sitting at his desk piled high with papers in his Patriarchate office. Around him, golden icons from Byzantium on the walls loomed over standing photos of the patriarch greeting world leaders, including U.S. President Barack Obama and Erdoğan.

“It is a matter of human rights and especially of religious freedom.”

Erdoğan has said Halki’s reopening depends on reciprocal measures from neighboring Greece that would improve the rights of Muslims there. Asked about that demand, Bartholomew threw up his hands.

“Are we responsible for that?” he asked. “I am favor for a mosque and even more mosques where there are Muslims, in order to give them the possibility to pray according to their own faith, but what can I do?”

Bartholomew said that the issue is not about Greek law, it is about Turkey’s responsibility to protect religious freedom. “I am a Turkish citizen and I was born here. I served in the Turkish army for two years,” he said. “I want my full rights as such as a Turkish citizen and not only for myself but for my church and my community.”

Later, he glanced over at a table near his desk with photos of Turkish President Abdullah Gül and his Greek counterpart Antonis Samaras. There were images of a dove and of an olive tree, symbolizing peace between the two often warring cultures. Bartholomew credited Erdoğan with improvements in rights for Christians in Turkey and noted that whereas ethnic Greeks once left Turkey in droves, many now are returning, especially because of Greece’s financial turmoil.

“We recognize these steps, we express our gratitude to Mr. Erdoğan, but we say that it is not enough,” he said.

In the interview, Bartholomew also said a meeting with Pope Francis in Jerusalem this month will help move the two churches closer to ending their nearly one-thousand-year divide.

The meetings between the ecumenical patriarch and the leader of the world’s Roman Catholics on May 25-26 will commemorate the historic visit of their predecessors 50 years ago that launched a dialogue aimed at ending the two churches’ schism in 1054.

“We shall say through our meeting and our prayer that it is the intention of both of us to work further for Christian unity and reconciliation,” Bartholomew said.

Although the Orthodox and Catholic churches remain estranged on key issues, including married clergy and the centralized power of the Vatican, there have been moves toward closer understanding, beginning with the 1964 meeting between Pope Paul VI and Ecumenical Patriarch Athenagoras in Jerusalem. It was the first encounter between a pope and Orthodox patriarch in more than 500 years.

Following the meeting, mutual excommunication edicts were dropped, and a Catholic-Orthodox Joint Declaration of 1965 called for greater harmony.

The two leaders will celebrate Mass together at the Church of the Holy Sepulchre, where the faithful believe Jesus was crucified and buried, and issue another declaration. Bartholomew said it had not yet been finalized.