Twelve People from Monophysite Church Baptized into Orthodoxy in the Philippines

Before that, missionaries held a multi-day seminar on the basics of Orthodoxy.
Pravmir.com team | 08 September 2021 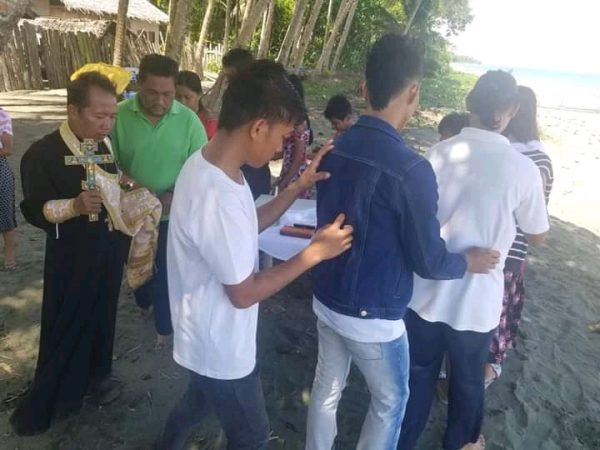 In the province of Zamboanga del Norte in the Philippines, twelve people received Orthodox Baptism in the waters of the West Philippines sea. Previously, these people belonged to one of the Monophysite churches, according to phvieparchy.org.

At their request, the missionary department of the Philippine-Vietnamese Diocese of the Russian Orthodox Church organized a multi-day seminar on the basics of the Orthodox faith for them in September. It was conducted in the vicinity of the town of Dipolog by the chairman of the Missionary Department of the diocese, Fr. Moses Kahilig, together with Maria Kahilig and Elijah Aleria.

According to prichod.ru, usually catechesis for Filipinos who have decided to accept the Orthodox faith is held by the educational center of Blessed Matrona of Moscow in the city of Davao. It also prepares candidates for studying in theological schools of the Russian Orthodox Church. In July, the center held an educational seminar for singers, and in March, for clergymen of the Dava Deanery, who deepened their knowledge of Lenten services.