Source: Pravmir.ru
Natalya Mihailova | 18 April 2014
April 16, 2014. PRAVMIR. In the village of Kaldais, Inzensky district, two Orthodox chapels and a baptistery have burned to the ground. The chapels were dedicated to St. Seraphim of Sarov and St. Sergius of Radonezh. 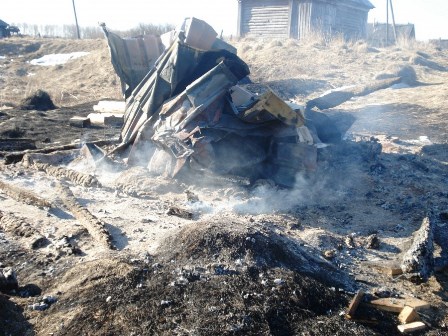 The villagers who found the burned down buildings reported the incident to representatives of the “Simbirsk Provincial Community, the web portal NEWSru reports. Policemen have already taken operative investigation measures.

The complex of chapels and the baptistery stood near springs that are famous throughout the region. One of the chapels has stood for about two or three years, the other had been consecrated on Theophany this year.

The rector of the St. Nicholas Church from the neighboring village of Oskino noted that people constantly visit the springs. The priest denies that the fire could have been started from candles lit by the faithful.

The locals believe that someone most likely intentionally set fire to the church buildings. The “Simbirsk Provincial Community” has decided not to restore the chapels. Instead, entrepreneurs will build a stone church on the site of the burned buildings, writes the newspaper “Rossiyskaya Gazeta.”