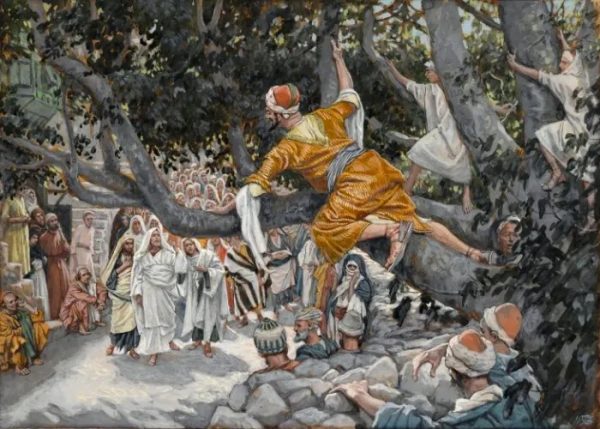 In the Gospel of Luke, we see Jesus interact with two rich men, but we are told that only one of them is saved as a result of their interaction.  The first, in chapter 18, is a ruler who asks Jesus what he must do to inherit eternal life.  The second, in chapter 19, is a tax collector who seeks merely to see Jesus as he passes through the city.  Both men are rich, both seek Jesus, only one is saved.  What was the difference?

To begin with, we must remind ourselves that salvation is a mystery, and that discerning principles and rules in the scriptures and self consciously applying them to ourselves is no guarantee that we will find salvation.  In fact, it seems that this approach to seeking to discover and apply the correct formula or law to his life is exactly the approach used by the ruler who fails to find salvation.

The ruler asks Jesus what he must do to inherit eternal life, and Jesus tells him to keep the commandments.  I think the ruler’s first (and perhaps biggest) mistake is that he thinks he is already keeping the commandments.  It is a tricky thing, talking to Jesus, or talking to any spiritually-minded person.  It is tricky because a holy person often sees a depth to the words they speak that the listener does not at first recognize.  When Jesus, or any holy person, speaks, we must not assume we already know what he or she is saying; for if we already understood, they would not have said it.

This is particularly the case with the ruler who boasts that he has kept “all these things” from his youth.  On the one hand, he knows that he still lacks something and he has come to ask Jesus for guidance.  But on the other hand, when Jesus speaks, the ruler dismisses it, as though Jesus didn’t know how good he already was.  I must confess that I have many times behaved similarly with my spiritual father or my bishop or with any other holy person I have gone to for advice.  When they have spoken, I assumed that I already understood the matter better than they did, and that there was still something else that they were missing.  However, given a little time and reflection, I often realized that I was indeed the person who didn’t understand, that I was the one who didn’t see clearly—precisely because I thought I already understood.

And this is what I think happened with the ruler.  He thought he understood what Jesus said to him, so he insisted that he had already fulfilled what Jesus had asked of him.  Jesus then pushed him further.  “One thing you lack,” (or “if you want to be perfect” as it is recorded by St. Matthew), Jesus says to him, “sell all that you have and distribute to the poor and you will have treasure in heaven; and come, follow me.”   Here the ruler sees his limitation and becomes very sorrowful because he is very rich (St. Mark and St. Matthew tell us that he “went away sorrowful”).  The ruler walks away without the salvation he was seeking.

Then a few days later Jesus meets another rich man, a man named Zaccheus, a tax collector.  Zaccheus does not seek to speak with Jesus, he only wants to see him; but in order to see him, Zaccheus has to climb a tree.  When Jesus passes by the tree, Jesus initiates the interaction with Zaccheus by inviting himself to stay at Zaccheus’ home.  Zaccheus not only welcomes Jesus (and presumably his disciples) into his home, but he hosts a banquet for him and invites his friends (who, unsurprisingly, are also tax collectors).

Then, apparently for no reason, Zaccheus stands and seems to boast, “Behold, Lord, I give half of my goods to the poor; and if I have taken anything from anyone by false accusation, I restore fourfold.”  I say Zaccheus seems to boast, and yet Jesus does not respond to Zaccheus the tax collector as he did to the boastful ruler.  Rather, Jesus says, “today salvation has come to this house.”

Something inside me wants to analyze these two interactions between Jesus and the rich men to discover a principle, a rule, a guideline that I can apply to myself so that I too can inherit eternal life.  Like the ruler, I want to find the key.  I want to find certainty, to be sure, to know I’m doing the right thing, the thing that will bring salvation.  And like the ruler, I often find myself sorrowful because I soon realize that I cannot, or am not willing to, do enough, give enough, leave behind enough to follow Jesus as he demands.  Truly I am the rich ruler.

But with Zaccheus there is such simplicity.  Just to see Jesus is enough for him.  He is so excited that Jesus wants to be in his home that he throws a party for Jesus.  He invites his tax collector friends.  And in the simplicity of his excitement, and probably after a few mugs of wine, he tells the itinerate rabbi Jesus (and everyone else in the room) all about his spiritual life, which consists in giving half of his income to the poor and refunding four times more those whom he overtaxed.  Such simplicity.  No pretensions to eternal life.  He just did what seemed right and rejoiced to have Jesus in his home.

Zaccheus the tax collector gave half  of his income to the poor, and Jesus accepted it.  The ruler kept all of the law from his youth, and Jesus demanded that he give all he had to the poor.  The one just wants to see Jesus and finds salvation in what he is already doing, the other wants to be perfect and walks away sorrowful because he cannot attain it.  Zaccheus is content just to see Jesus from afar, and ends up having Jesus in his home.  The ruler confronts Jesus demanding an answer, and receives an answer beyond his ability.

Lord, grant us the simplicity and generosity of Zaccheus that Jesus may dwell in the home of our hearts and free us from the ruler in our mind who demands answers and rules and ways that are beyond our ability.