Representatives of various denominations take turns in celebrating Mass on Kiev’s Independence Square, the heart of anti-government demonstrations. They were invited by the leaders of the opposition. Churches condemn the streets on the violence and call on politicians to find a peaceful solution to the social crisis.

Moscow (AsiaNews) – “We could not stand by and watch, we had to take the side of the people”. This, according to members of the local clergy, is the underlying reason that moved all the main Christian Churches in Ukraine to take to the streets in recent months of anti-government protest, not only in support of the population, but especially in an attempt to ‘mediate’ where the demonstrations turned violent. Several interviews published in the Russian press in February, describe this unexpected “alliance” between the various Christian churches in the former Soviet republic. The conflict in Kiev was triggered by President Viktor Yanukovych’s u-turn on signing the Partnership Agreement with the EU in favor of a rapprochement with Russia. Many feared that the Churches’ reaction to the protest movement would reflect their own internal geopolitical division: the Ukrainian Orthodox Church – Kiev Patriarchate (not recognized by other churches and opposed by Moscow), – the Ukrainian Orthodox Patriarchate of Moscow, the Ukrainian Autocephalous Orthodox Church (close to Constantinople) and the Greek – Catholics in communion with the Pope.

However, they have all united in sharing the same stance: they are working together in an attempt to constructively and peacefully address the issues of the protest. Even the historically more conservative Orthodox monks under the jurisdiction of the Patriarchate of Moscow, took to the streets to pray. Tents have been set up on the Maidan Square (the main square of Kiev and the theater of its biggest protests) where the different denominations take turns in celebrating Mass, at the request of the protesters themselves. A joint statement by religious leaders, issued in late January, has condemned the violence and asked politicians to “find a peaceful solution to the social crisis”.

The following excerpts are from the interviews in three different Kommersant editions with representatives of local Christian communities. 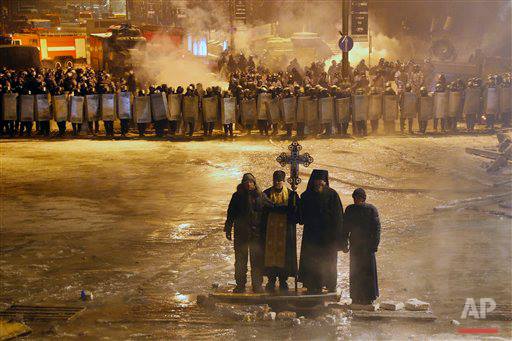 It all began with the protesters themselves inviting the priests. Once the protesters understood that they had to stay not just a day or two and that this was going to take a lot of time, they began to appeal to clergy: come here and pray with us. I myself was there several times. I understood as a citizen that I had to be there, because values that Maidan represented are important for the development of society. So this was all on the initiative of the priests themselves. The church only confirmed for the priests that they were acting properly. The church stands on the side of Maidan. It stands on the side of Maidan not politically, but as a social and national means of protest. The church is outside politics. It is present on Maidan as a spiritual part that the protesters themselves need. I call this the peacemaking contingent of Maidan. In such a stalemate, the Council of Churches and Religious Organizations assembled. We became mediators, and at the meeting with the opposition the Council of Churches blessed the opposition to go to the negotiations with the president. The church now has maximum trust from various parties and therefore its mediating mission was simply necessary. In this sense it is simpler for our church than for others. There is a document which is the result of centuries of the life of the church. This is the social doctrine of the Catholic Church. The Catholic Church has lived under totalitarian and communist and monarchist regimes. And the experience of the interaction of the church with the government and society in various situations has issued into this doctrine. There it is clearly stated that the church must be with the people. And that the people have the right to protest against steps of the government with which they do not agree. But it is also clearly stated that armed, violent protest is an extreme measure and is not effective. We already are a European state-historically and geographically. It is not that when we join the European Union we will become Europeans. We already are Europeans. But without European institutions many spheres of life are not right. This pertains to such spheres are the real struggle with corruption, reforms of education and health care, and attitude toward ecology. One of the positive moments in inter-church relations is that we are praying together on Maidan, we have a common position about Evromaidan, human dignity, and the European integration desires of Ukrainians.

“Several of our Church monks took to Grushevsky St. [where the Supreme Rada, the Ukrainian parliament is located and the epicenter of the unrest in late January, ed] , following their consciences, where a terrible act confrontation between demonstrators and law enforcement was going on.  This was their personal decision, but when the church leadership learned about this action it supported in unambiguously. When the church considers it morally impermissible to submit to the orders of the state authorities it reserves to itself the right to call its members to peaceful civil disobedience. But such a decision, of course, is made by the supreme church authority. Now, we must all [the various Churches-ed] do everything possible to save the country. And to fulfill this important task, we are open to collaboration both with the political forces, and with other denominations. At the same time, the issues of principle that divide us have not disappeared. When the social crisis is overcome, we will return to discussing ways of overcoming the division of the Church in Ukraine”.

“The church is called to be a peacemaker. I cannot look on at clashes from the sidelines. People are listening, and I can say that in the past two months the public role and public influence of the church have grown very much. There was a discrepancy between the Ukrainian Orthodox Church – Moscow Patriarchate and the Russian. In Russia, the church is structurally accustomed to stick with the government to the end, whatever it may be. Therefore it was more difficult for their priests to descend on Maidan than for us. The Church says only one thing: less violence and dialogue is not an end in itself, but a means to obtain results. We insist on the continuation of negotiations, but we will not be moderators. We can not take responsibility for decisions that belong to the government. Just as we do not want to take decisions on the life of the Church. The Patriarchates of Moscow and Kiev have been at odds for 22 years. But both say that the state can not resolve our conflict. We support European integration, although we know that Europe is not heaven on earth. Patriarch Filaret said that the Church must always uphold justice. If the authorities act in the right way, the Church will support them. If they behave in an unfair manner, the Church can not support them. The Church is always on the people’s side. Because without the people, the Church is just a building. Beautiful, but empty”. ( N.A. )