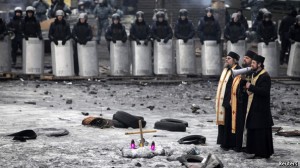 AMONG the most striking and inspiring images to emerge from the battle-scarred streets of Kiev have been photographs of priests, alone or in groups, standing between protestors and police, offering blessings, tending the wounded and praying over the dead. But who are exactly are these clerics?

I won’t attempt to offer any real-time comment on who is doing what, or on which priests are doing what, as events unfold in the Ukrainian capital. There are more than enough smart-alecs offering dubious expertise from a safe distance.

But Ukraine’s religious scene is a hard one to grasp. To understand the historic role that various churches have played, or might play in the future, it might be helpful to cast a glance backwards, both to the recent and distant past. Confusingly, there are at least four significant church organisations which claim spiritual descent from the conversion of the Slavs, whose heartland was Kiev, in 988, and all of them use broadly similar eastern Christian rites. One, the Greek-Catholic church, is widely followed in western Ukraine; it combines an Orthodox style of service with loyalty to the Pope. Its separate existence dates back to the late 16th century, when an Orthodox population found itself under the authority of Catholic Poland. The Greek Catholics were harshly persecuted by Stalin in the aftermath of the second world war, and much of their property was transferred to the Russian Orthodox Church, which operated more freely and extensively in Ukraine than it did in any other part of the Soviet Union.

The country’s biggest Orthodox church (as measured by clergy, parishes and active adherents) is the one aligned with Moscow; it is styled as the Ukrainian Orthodox Church(UOC) and is formally an autonomous body, albeit under the ultimate jurisdiction of the Moscow Patriarchate. The UOC is also the only Orthodox body which is acknowledged as legitimate by other Orthodox churches round the world.

Under the leadership of Metropolitan Volodymyr, the UOC emerged as the winner in a religio-political contest that was played out in the early 1990s as Ukraine was gaining independence. The country’s new rulers wanted it to have its own national church, following the pattern of other Orthodox countries which had gained political independence. Apart from Metropolitan Volodmyr and the UOC, the other contenders were Filaret Denisenko, a prelate who was dismissed from a senior job under the Moscow Patriarchate and established a rival body, the Kiev Patriarchate which has won no international recognition. Then there was the Ukrainian Autocephalous Orthodox Church (UAOC), an organisation that was suppressed in Soviet times but enjoyed (and still enjoys) a following in the diaspora. Parts of the UAOC joined up with the Kiev Patriarchate; others stayed aloof.

Although some expected him to be “Moscow’s man” in Ukrainian church affairs, Metropolitan Volodomyr has actually charted a much more balanced course. He has been a supporter of Ukrainian statehood and his independence from Moscow seems more than notional, to the dismay of ultra-Russophile elements in his church. But he is an elderly man and many people wonder what will happen next—will his successor be a Ukrainian with strong local roots, or will the Patriarchate of Moscow impose its own candidate? At least one zealously pro-Russian priest in Kiev seems unwilling to wait; he unilaterally placed his parish under the direct jurisdiction of Moscow.

It is a pretty hard situation to understand unless you have a passion for ecclesiology. In any case, the details probably don’t matter to a wounded or dying protester who is receiving the solace and sacraments of his religion.