Source: Interfax-religion.com
Natalya Mihailova | 03 March 2015
Moscow, March 2, Interfax - A group of nationalists started problems on the grounds of the Cathedral of the Transfiguration belonging to Moscow Patriarchate's Ukrainian Orthodox Church (UOC) in the Ukrainian town of Sumy. 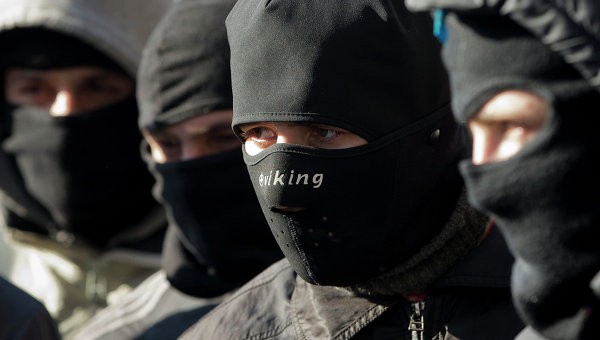 The incident occurred last Sunday, the day of the Triumph of Orthodoxy. During the church service, a representative of the Freedom movement, who was holding a placard with offensive content, “first started an argument and then assaulted the church’s security guard and caused him bodily injuries,” a UOC spokesperson said.

A group of approximately 20 people in masks and camouflage bearing the emblems of the Right Sector, an extremist organization banned in Russia, gathered outside the church.

They blocked the entrance, threatening the ruling archpriest, the clergy and the flock.

When Archbishop Yevglogy of Sumy and Okhtyrka, having finished the prayer service, went on the stairs of the cathedral “the masked young men tried to approach him, shouting various dirty profane words and threats of physical extermination,” the spokesperson said.

“Some of the assailants seemed to be intoxicated, judging by their odd behavior. The crowd of assailants was pushed away from the archpriest,” the UOC spokesperson said.

A few hours later several assailants came back to the cathedral, demanding an urgent meeting with the archpriest. They started arguing with him and demanded that he open the door of the diocese administration.