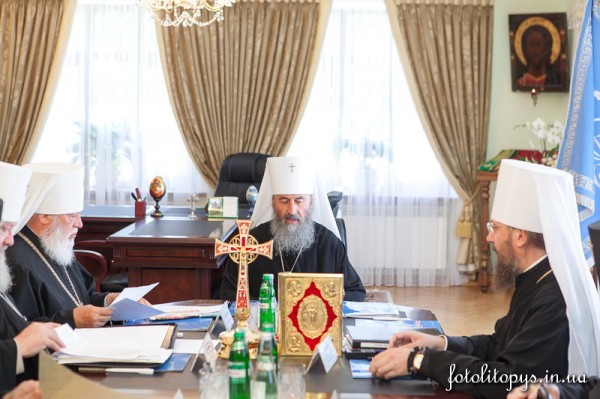 “The clergy and believers from these regions are asking for all possible measures to be taken to stop the bloodshed, which is hurting civilians. Our believers in the eastern part of the country think that any contradictions should be resolved through dialogue and negotiation. Our entire church believes that problems should be resolved peacefully. Together we should do everything to prevent the deaths of civilians,” the Holy Synod of the Ukrainian Orthodox Church said in its address to Poroshenko, which was posted on its official website.

Members of the Synod also expressed hopes that Poroshenko will guarantee religious peace in the country. “Peaceful relations between churches and religious organizations in Ukraine are an important achievement of the years of independence. Despite the extremely tense public conflict of the past few months, we have managed to maintain religious peace,” the document says.

The authors of the address said the Ukrainian Orthodox Church speaks in favor of state independence and the territorial integrity of Ukraine and condemns actions aimed at undermining “the state sovereignty and division of the united Ukraine.”

The Holy Synod pointed out that attempts have recently been made to destroy religious accord in Ukraine and there have been attacks and attempts to destroy churches and religious buildings.

“To maintain religious peace in the country, there is a need to ensure impartial treatment of all religious organizations and ensure truthful coverage of their activities in the media,” the document says.

The Holy Synod also said that reports that considerably distort the position of the church on the situation in Ukraine have been published in the media recently. “For this reason, it is important that we prevent the destabilization of the situation in the country by ungrounded accusations and slander while preserving the inviolability of the external borders of our state,” the document says.