Ukrainian Schismatics and Uniates Hope to Create Single Patriarchate in Communion with both Rome and Constantinople, Says Uniate Head 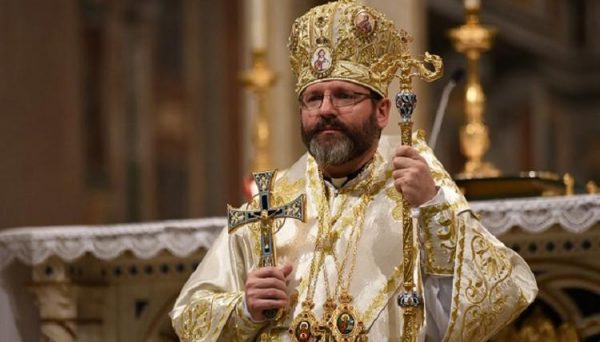 Kiev, January 10, 2019 – According to Svyatoslav Shevchuk, Head of the Ukrainian Uniate organization, it is necessary to make every effort to restore the original unity of the Catholic and Orthodox “branches” of the Kiev Church.

Moreover, it is necessary to distinguish between the concepts of “unity” and “unification,” Shevchuk explained in a recent interview with Glavkom.

“This is our position that I tried to declare during the celebrations for the 1,030th anniversary of the Baptism of Rus’-Ukraine. ‘Unification’ is what happened today in the bosom of Ukrainian Orthodoxy, when a new structure was created with Local status. But when we talk about an ‘outstretched hand,’ we’re talking about unity, that is, while remaining ourselves, we can and must cooperate in the name of the good of the Ukrainian people, in the name of truth, in the name of the search for universal unity with Christians, which we call the ecumenical movement.”

According to him, the Ukrainian Greek Catholic Church (UGCC) is seeking for a way to restore unity with the “now divided Kievan Church that was once born in the baptismal waters of the Dnieper,” and this is “wholly within the context of the modern ecumenical movement for the restoration of the unity of all Churches of Christ, the rapprochement of the Orthodox and Catholic Churches.”

Shevchuk earlier said that the idea of restored Eucharistic communion between the Orthodox and Uniates is their “joyful prospect.” For now, the new Ukrainian schismatic church and the Ukrainian Uniates have developed a road map for cooperation in various areas, “Metropolitan” Epiphany Dumenko explained.

Following October 15’s “unification council,” Shevchuk hailed the consolidation of two schismatic structures into one as “God’s gift” on the way to the “full unity of the Churches of Vladimir’s Baptism.” He also noted at that time, that from then on, the two groups “go together into history, towards unity, towards truth.”

In his view, the restoration of Eucharistic communion between the Orthodox and Catholic would be a “fulfillment of the commandment of Christ, where ‘all will be one.’” And this will be accomplished, he believes, by the new Ukrainian structure joining the ecumenical movement:

Today the ecumenical movement at a universal scale is a fact. It cannot be stopped anymore. That is why it is very important for our sister church, the newly-born Autocephalous Orthodox Church of Ukraine, to join it. So that it not be closed off into itself. And this search for universal unity between Catholic and Orthodox Churches is very dynamic in Ukraine. It is no wonder that St. Pope John Paul II once called Ukraine a ‘laboratory of ecumenism’…

The point was that we did not build two different patriarchates, but sought to create a unified Kyivan Patriarchate, which would be recognized both by the Holy See in Rome and by Constantinople. We are aware that this kind of unity will be possible when the ecumenical process is crowned at the universal level by the restoration of Eucharistic communion between Rome and Constantinople. This is not utopian thinking, as some people call it. This is the goal of the ecumenical movement.

“We know that the mother Church of Kiev, which is the common root of both Ukrainian Orthodoxy and the Greek Catholic Church, reacted painfully to the gap between Rome and Constantinople. For many years the primate, episcopate, monastics, and faithful of the Kiev Church considered it a local conflict, a quarrel between the Latins and the Greeks. But later this gap tore the interior of the Kiev Church to shreds. And that is why today it is necessary to make every effort not only to overcome the division within Ukrainian Orthodoxy, but also to seriously theologize, pray, and work to restore the original unity of the Kiev Church in its Orthodox and Catholic branches. And the UGCC bears the mystical Church memory of the undivided Christianity of the first millennium,” Shevchuk concluded.

This year, Holy Intercession Church in Glen Cove, NY prayerfully marked the 70th anniversary of its founding and…

Patriarch Kirill: Teachers of the Basics of Orthodox Culture at Schools Have a Tremendous Task

The Basics of Orthodox Culture course (BOC) in schools cannot be regarded as a secondary subject, because today we fight…

Metropolitan Onuphry: We Are Called to Be Like God

If we love our enemies, do good deeds and lend things to others, without demanding anything in return,…

Most viewed articles
Loving the Enemy174
Hallowed Be Your Name: Some Grammar and A Reflection142
Who Is the Author of Confusion and Fear?137
Church Dating 1,600 Years Back Discovered in Turkey’s Priene Ancient City126
Patriarch Kirill: Teachers of the Basics of Orthodox Culture at Schools Have a Tremendous Task117
Chapel of Life-giving Spring and St. Nectarios under construction at Bucharest Oncology Centre85
Holy Intercession Church in Glen Cove, NY, Celebrates its 70th Anniversary41
Seven-day celebrations dedicated to the Saint who helped Bucharest during plague epidemic begin on Thursday32
How to Read the Bible1
Most popular authors
Fr. Theodore Stylianopoulos174
Pravmir.com team158
Archpriest Michael Gillis142
Fr. Stephen Powley137
Dilan Pamuk126
Aurelian Iftimiu117
Archpriest Lawrence Farley1