10 Reasons the Ecumenical Patriarchate Made a Huge Mistake in Ukraine 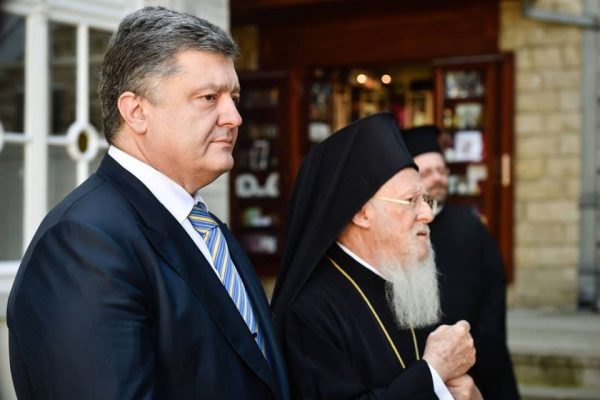 Pretty soon, the Ecumenical Patriarchate is set to begin an information campaign of why its actions in Ukraine were justified, and how “bad information” in social networks is misportraying this master plan of creating unity and “peace and love in Christ”. It is likely what I have to say here will be received by some as “Russian disinformation”, but I will dare to make my opinion known to my fellow Orthodox Greeks and others, in hope it will at least make them think more deeply about the potential consequences of what just happened this January in the Phanar.

1. The Ecumenical Patriarchate stepped into a civil conflict at the invitation of just one of the conflicting parties. This is not a mediation, it is an act of taking sides. Therefore, the Ecumenical Patriarchate cannot call itself a mediator in a conflict, it is a co-belligerent. History has shown that foreign parties that become involved in a civil conflict will not be looked upon favorably by either side if the conflict ever resolves.

2. The level of the Moscow Synod’s involvement with the affairs of the Ukrainian Orthodox Church of the Moscow Patriarchate does not affect either the day to day operations of the church, nor its strategic orientation. During the civil war in Ukraine, Metropolitan Onuphry called upon both sides to cease violence, whereas the schismatic jurisdictions that form the backbone of the new Ukrainian jurisdiction took a clear stance in the conflict and backed the new Ukrainian government’s assault on its own civilians in Donbass, with the false Patriarch Philaret (now carrying the honorary ‘patriarch’ title in the new church structure) calling for blood vengeance against the anti-government faction. This shows, clearly, that one side is more politicized than the other. There was no pressing need for the faithful of Ukraine to have a different church, the only reason for the existence of the schismatic jurisdictions was and remains political. There is no ‘loyalty to Russia’ required of the canonical Ukrainian church’s clergy or flock.

4. The granting of this “tomos of autocephaly” sets a dangerous precedent – it may encourage other Orthodox churches to do the same for political reasons if they so wish. The Ecumenical Patriarchate was very upset at the decision of the Moscow Patriarchate – at that time under the heavy influence of the Soviet government – to grant autocephaly to a structure calling itself the “Orthodox Church of America”, which to this day it refuses to recognize as an autocephalous church, considering it a part of the Moscow Patriarchate. Granting this tomos to the Ukrainian schismatics, it opens the door for voices within other Orthodox churches to act independently, e.g. granting a tomos to a Greek old calendar jurisdiction, or to a Montenegrin or Macedonian jurisdiction. The Ecumenical Patriarchate is latching onto what it believes is its exclusive right to resolve issues of Orthodox jurisdictions, but there are those who present serious arguments to the contrary. What is to stop a future Russian patriarch of using the argument of ‘size’ in order to wield influence in world Orthodoxy, citing that size is a key indicator of the Holy Spirit’s “presence”, for example?

6. The Ecumenical Patriarchate has entered into a relationship with clerics who have a pattern of divisive behavior. This, in turn, practically guarantees that a power struggle will become manifest at some point, as the various actors in the new structure vie for power and influence, including overriding the provisions of the tomos granted by the Ecumenical Patriarchate in order to meet the broader political goal of ‘complete independence’. Already we see that Philaret has refused to surrender his title of ‘patriarch of Kiev and Ukraine’, he continues to wear his patriarchal garb which the new metropolitan Epiphany, his mentee, fully accepts as normal. In his interview with the BBC, Archbishop Daniel of the Ecumenical Patriarchate, a former Uniate from western Ukraine who was one of the engineers of the Ukrainian church project, defended this situation from the standpoint of oekonomia. However, it betrays the true nature of the people who are not willing to show humility and obedience to what they claim is a ‘greater good’.

7. The worst and most terrifying result of the tomos is the green light it has given for the Ukrainian government, in concert with armed Ukrainian chauvinist gangs, to begin intimidating believers who have refused to join the new church structure. There have already been numerous documented reports of physical violence and intimidation against clerics of the canonical Ukrainian church, both on an official government level and through various gang activity (such as the neo-Nazi C-14). In his BBC interview, Archbishop Daniel has attempted to position himself against this inconvenient information by claiming that there “may be provocations by the Russian church”. The facts speak otherwise. Excluding the Donbass region, all of Ukraine is thoroughly controlled by the Ukrainian government which has an extensive police network that is constantly monitoring the population for any “pro-Russian” sympathy. Clerics have regularly been called in for questioning. Meanwhile, gangs that have perpetuated violence against any suspected “pro-Russian” elements go unpunished. Complaints to human rights organizations, including international ones, have been shown to be ineffective. International media has largely been disinterested in these matters, for political reasons.

8. The Synod of the Ecumenical Patriarchate has virtually zero influence on the actors perpetuating violence or threatening to. The system of equal protection under the law is heavily flawed in Ukraine under the current government, something even its western backers admit. The Ecumenical Patriarchate Synodal statement made in October merely “appeal(s) to all sides involved to avoid appropriation of Churches, Monasteries and other properties, as well as every other act of violence and retaliation” – but this constitutes nothing other than ‘good wishes’ and an ill-fated attempt at moral suasion. Fully knowing that violence and retaliation is a practical certainty in response to this tomos, and without any appropriate lever of influence in the situation, the Ecumenical Patriarchate is accepting moral responsibility for this violence in the face of history and before God.

9. This tomos has clearly been used as a political instrument by Ukraine’s president, who is desperately trying to rally anti-Russian forces in Ukraine to push him over his opponents in the upcoming election (his ratings show he is very likely to suffer defeat at the hands of his key opponent, Ms. Timoshenko). Metropolitan Epiphany, the leader of the new Ukrainian structure, has been parroting Poroshenko’s rhetoric and has de-facto become a part of his re-election campaign. It is likewise of note that we see other foreign actors, namely the US State Department, taking an active role in supporting the creation of this church, including making official statements to that end. This is all the more amusing in the face of the criticism frequently leveled at Patriarch Kirill for having a ‘too close relationship’ with Russian president Putin. Once again, we see a double standard at work.

10. The Ukrainian church project was built under the assumption that there would be a mass defection to join the new structure from the canonical Ukrainian Orthodox Church. But the results show that only two metropolitans have so far defected. Archbishop Daniel in his BBC interview has implied that there are “many more” who are willing to join but are still keeping on the ‘down low’, waiting for a mass exodus to begin, ludicrously implying that Ukraine is still under heavy de-facto control of pro-Russian actors who have the ability to punish and persecute anyone daring to dissent. The fact is that anything built on treason will beget more treason. Encouraging bishops and clergy to join another church without canonical release is to foment schism, and as history has repeatedly shown, schism begets more schism, like bacteria multiplying. In an effort to ‘foster unity’, the Ecumenical Patriarchate has in fact encouraged division and violence.

In conclusion, this event is a tragedy for all of world Orthodoxy, as it has created more problems than existed before, and worst of all, it has placed the lives of many Orthodox faithful in Ukraine in danger. In a time of mass secularization, where society is moving away from God on many levels, a worse temptation could not have been imagined. We need to pray that the consequences of this extremely misguided action will be reversed as soon as possible for the benefit of all of Christendom.