Source: Pravda.ru
The Church is not a reservation, and Orthodoxy is the core belief of our people, despite the fact that, of course, in Russia there are other traditional religions, but the Russian people, on the whole, are an Orthodox nation.
Natalya Mihailova | 22 May 2014
The construction of Holy Ascension Cathedral in Ulyanovsk is about to be finished. Ulyanovsk Governor Sergei Morozov, even before he headed the region, was one of the initiators of the revival of the cathedral and supervised its construction. 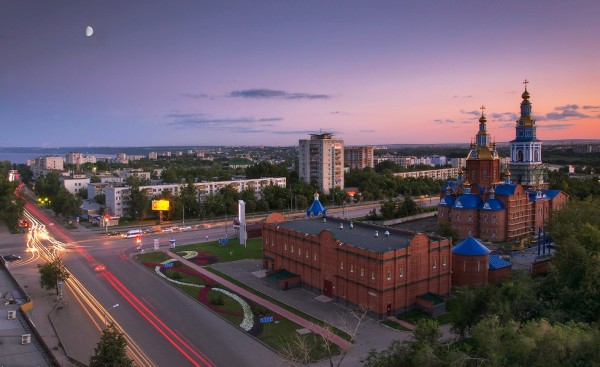 “Since we are talking about the main temple, the participation of the authorities in this construction seems to be something deeply natural and correct, – Archpriest Vsevolod Chaplin, the chairman of the Moscow Patriarchate Department for Cooperation of Church and Society, told Pravda.Ru. – One should bear in mind the fact that the religious sphere of public life is no less, and perhaps even more important than, for example, sport or cultural sphere. If the state often helps non-governmental sports and cultural institutions, the logic here should be the same.”

Holy Ascension Cathedral, designed on the model of the ancient Temple of Ascension in Simbirsk, is almost ready. The construction continued for 17 years. The funds, as usual, were not enough. Various organizations, businessmen, officials and common people were supporting the construction. Yet, in the beginning of the new millennium, the work was stopped for years. People began to doubt that the temple will ever be finished. However, the arrival of Sergei Morozov for the position of the governor became a turning point in the life of the cathedral.

“Of course, this proves the involvement of the current governor to the cultural values ​​and beliefs that define Russia’s face in history, – expert of the Synodal Department of the Moscow Patriarchate for Youth, hieromonch Dimitry (Pershin) told Pravda.Ru. – The church is separated from the state, but not from people or culture.”

“It’s better when there is support. It’s better not only for the church and for believers – it’s better for everyone, it is better for government officials, who support the church, doing good things and feel responsible for it, – Irina Medvedeva, the director of the Institute of Demographic Security, writer and playwright, children’s psychologist, vice president and co-founder of the Interregional Fund for Social and Psychological Assistance to Family and Child, told Pravda.Ru. – For example, in Belarus, they support the construction and restoration of churches for a long time already. When I was there a few years ago and I learned about it, it was painful to know, because our state does not help either to build or restore churches, so I’m very happy that this is now happening at least somewhere.”

“The Church is not a reservation, and Orthodoxy is the core belief of our people, despite the fact that, of course, in Russia there are other traditional religions, but the Russian people, on the whole, are an Orthodox nation. Both local and federal authorities should certainly support the church in its noble mission of spiritual and moral transformation of the society. There is nothing amazing or unmodern in this, – said Valentin Lebedev, the  chairman of the Union of Orthodox Citizens, chief editor of Orthodox Conversation publication said. – In the actions of the governor of the Ulyanovsk region, taken against the backdrop of separation of the church from the state, we see fertile and productive activities to help the Church in its daily work to rebuild our society on the basis of traditional spiritual and moral principles. All our lives depend on this, because spiritual transformation that has already begun, despite some difficulties in our country, is the springboard for economic, social, civil, intellectual and spiritual revival. This is, of course, a very positive example for other regions of Russia.”