Source: OCA
Natalya Mihailova | 02 August 2014
Faithful of the Orthodox Church in America in the New York City area are invited to attend a rally calling attention to the suffering of Christians in Iraq and the Middle East in front of the United Nations building here at 10:00 a.m. on Saturday, August 2, 2014. 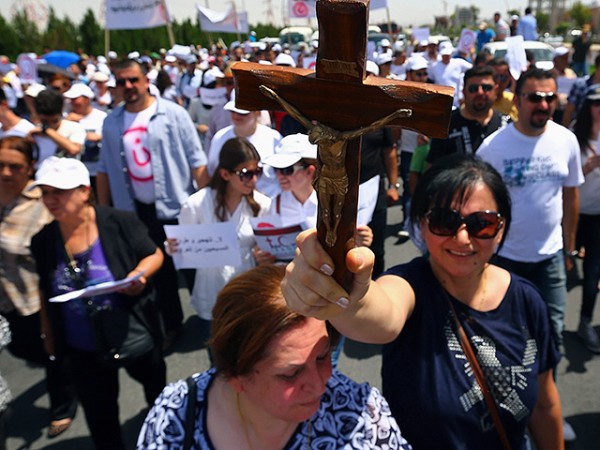 “The pace of the threats in Iraq has escalated recently and the attacks and killing of Christians in Mosul has increased,” reads a letter sent by the Very Rev. Gabriel Adde of the Teaneck, NJ-based Archdiocese of the Syriac Orthodox Church announcing the gathering.  “Some terrorists have publicly called upon Christians to leave their homes, seizing and confiscating their property. Christians were issued an ultimatum to become displaced, renounce their faith and convert, pay an exorbitant tax, or die by the sword.”

The letter echoes widespread media reports that Mosul, a Christian enclave for over 1500 years, had been “emptied” of its Christian population.  It goes on to state that International Christian Outreach [ICO], an organization under the Archdiocese’s auspices, hopes to raise awareness by “asking people of all faiths, especially Christians, to stand up and join us in demanding protection and a safe haven for all persecuted Christians in the Middle East, to prevent another Genocide, and to stop the ethnic cleansing of the indigenous Christian population.”

“We urge you to join our peaceful demonstration [so that] we can show support for our Christian brethren,” the letter concludes.