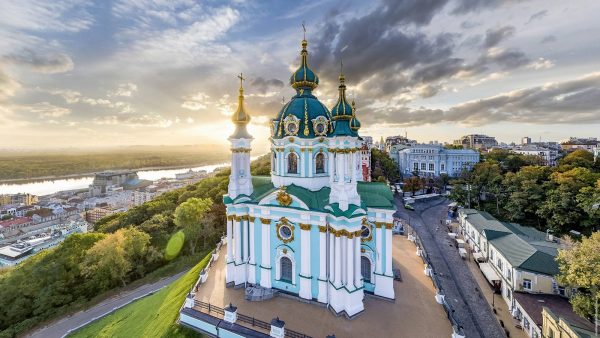 Kiev, November 15 – Molotov cocktails have been thrown at the building of St. Andrew’s Church in Kiev, which was recently transferred to Constantinople’s jurisdiction and which is currently being restored, according to Yevstraty Zorya, the press secretary of the “Kiev Patriarchate”.

“Molotov cocktails were thrown at the doors of the foundation house of St. Andrew’s Church an hour and a half ago. There was no fire, no damage was done, no one was hurt,” Zorya wrote on Facebook on Thursday.

The Kiev police said the attackers had thrown bottles containing an incendiary mixture at the door of St. Andrew’s Church but that no fire occurred.

A security guard at St. Andrew’s Church called the police at 8:05 a.m. and said that two unknown individuals had thrown two glass bottles at the doors of the church. “No one was hurt, and there was no fire,” the police said.

The security guards said they had tried to detain the men, but the latter used gas sprays and fled.

Later, Zorya said on Facebook that a priest of the “Kiev Patriarchate”, the custodian of the church, had been attacked with pepper spray.

St. Andrew’s Church, an object of cultural heritage that belongs to the state, was recently handed over to the Ecumenical Patriarchate.

Most viewed articles
Patriarch Kirill: The Peoples of Russia and Ukraine Have No Interest in the Conflict138
Life Savers116
Metropolitan Hilarion of Eastern America and New York Reposes in the Lord104
Communion restored between the Serbian Orthodox Church and the Macedonian Orthodox Church – Ohrid Archbishopric104
Metropolitan Onuphry: One Needs to Search for the Truth in Spiritual Life, not Easy Ways85
Metropolitan Hilarion of Eastern America and New York to Be Buried in Jordanville on May 2272
What Do We Celebrate at Mid-Pentecost?69
Celebrating 100 Years with Paschal Joy55
Patriarch of Serbia to Concelebrate with Archbishop Stephen of Ohrid18
Most popular authors
Pravmir.com team520
Archpriest John Moses (+2019)116
Ioannis Foundoulis69
Priest Luke A. Veronis55
Maria Trushanina1