An urgent plea from Gaza: ‘We need aid more than ever’

Source: Independent Catholic News
“The humanitarian situation in Gaza is very bad... We ask for your help for the poor and those injured by the war. Now, more than ever before, is the time to aid the people in Gaza.”
Natalya Mihailova | 07 August 2014 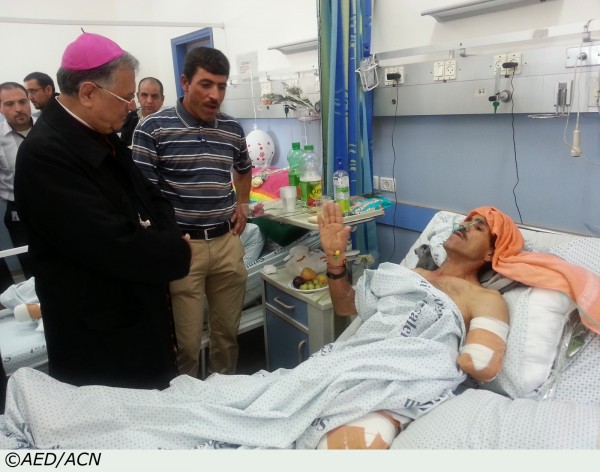 Bishop William Shomali, who has pastoral responsibility for Latin-Rite Catholics in Gaza, has made an urgent appeal to Aid to the Church in Need for support for victims of the Gaza bombardment. He said: “The humanitarian situation in Gaza is very bad… We ask for your help for the poor and those injured by the war. Now, more than ever before, is the time to aid the people in Gaza.”

In response to the bishop’s plea, Aid to the Church in Need sent out €50,000 in emergency aid and stands poised to provide further help. The Catholic charity was told by Bishop Shomali that one of the most urgent tasks facing the Church at the current time is providing medical treatment for civilian casualties in hospitals both within Gaza and outside.

St Joseph’s Catholic Hospital, Jerusalem is caring for a seriously injured Christian and 24 Muslims from Gaza – and the Church’s medical facilities in Gaza are also in dire need. Hospital activities have been curtailed by a shortage of power and fuel in the territory, restricting in their ability to treat patients. Fuel for generators is a priority.

Aid to the Church in Need was told that as well as emergency medical aid, the repair of Christian facilities will be necessary.

Bishop Shomali appealed for long-term help to rebuild the Catholic School of the Holy Family, which is currently sheltering 1,000 refugees.

Both the Catholic and Orthodox Churches have accepted Muslims who have lost their homes into their buildings as well as Christians.

The Holy Family’s parish priest, Argentinian Father Jorge Hernandez, still remains there with three Sisters from Mother Teresa’s Missionaries of Charity who are caring for handicapped children and old people.

As well as damage to several buildings belonging to Holy Family parish, the Orthodox cemetery and private houses belonging to Christians have been destroyed.

According to the Palestinian Ministry of Health, more than 1,700 citizens of Gaza have lost their lives since hostilities began on 8 July. In excess of 9,000 have been injured, in some cases severely, and upwards of 254,000 people are displaced.

More than 1,300 Christians live in Gaza alongside its approximately 1.8 million Muslims. There are about 1,200 Greek Orthodox Christians and 170 Roman Catholics.

Patriarch Fouad Twal, the Latin Patriarch of Jerusalem, also made a direct appeal to supporters of the charity. He said: “Dear benefactors of ACN. We in the Holy Land are a Church in need. Please continue to give us your prayers, your solidarity and your aid. We need them now more than ever.”

Donate to Aid to the Church in Need here: http://www.acnuk.org/donate2.php