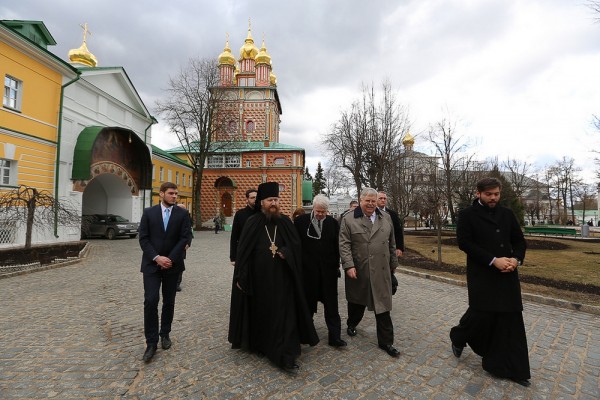 At the Holy Gates the high guests were welcomed by the dean of the monastery, Archimandrite Pavel (Krivinogov). During his tour of the monastery, the ambassador visited the Cathedral of the Trinity with its relics of St Sergius of Radonezh. Mr. Tefft also came to the Refectory Church, which is unique as one of the largest rooms of its time, built without intermediate supports. It was intended for solemn receptions and festive repasts. In the mid-20th century, the Local and Bishops’ Councils of the Russian Orthodox Church were held in it. Then the guest was told the story of the Laura’s belfry and the bells cast especially for it. In the end of the tour, Mr. Tefft visited the Cathedral of the Assumption and the Godunovs’ burial vault.

The US ambassador also visited the Moscow Theological Academy. The guests were welcomed by the pro-rector for academic work, Archpriest Alexander Zadornov. In the school, they had a brief tea party during which Mr. Tefft had an opportunity to learn about the life of the academy and seminary and to talk with professors.

During the excursion to the academy’s Church Archaeology Museum, the ambassador was told about Patriarch Alexis I, who authorized its revival after the plunder in the post-revolutionary years, and was shown the Primate’s personal belongings.

In conclusion of the visit, Archimandrite Pavel presented the guests with token of the visit, particularly an image of the Laura on canvass. On his part, Mr. Tefft gave the monastery some books about the history and culture of the United States.