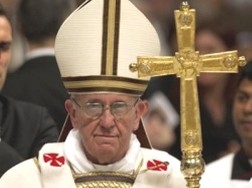 This is the first visit of Vatican’s foreign minister to Georgia over the past 11 years. Previously the Holy See’s Secretary for Relations with States, the post which at the time was held by Jean-Louis Tauran, visited Tbilisi in September, 2003 to sign an interstate agreement giving the Catholic Church in Georgia legal status. But in a last-minute discussion, yielding to pressure from the Georgian Orthodox Church, the Georgian authorities made U-turn and refused to sign the agreement. In 2011, despite protests from the Georgian Orthodox Church, the Georgian authorities adopted law allowing religious minority groups to be registered as legal entities under public law, which, among others, was also used by several branches of the Roman Catholic Church in Georgia.

“My visit is intended to be a way of expressing the friendship, which characterizes the relations between the Holy See and Georgia,” Archbishop Mamberti said after meeting Georgian Foreign Minister Maia Panjikidze on September 15.

“I would like to stress that our relationship has been significantly intensified, especially during the last few years,” he said. “By affirming this, I refer to cultural cooperation, frequent bilateral consultations dedicated to current issues affecting the region and also more broadly, the international community. Some of these questions continue to challenge Georgia’s government and people and the Holy See, as on various occasions, expresses and continues to manifest its solidarity with your country.”

“During the last few years Georgia has strengthened its cultural, economic and political ties at European level. I congratulate sincerely your country for these achievements and at the same time, I would like to express my confidence that the Georgian nation will continue to bring its specific cultural and spiritual contribution to the European continent and also to its transnational institutions,” Archbishop Mamberti said.

He said that there is room for cooperation “in some new spheres, especially with regards to themes connected to the indisputable richness of Georgian Christian heritage.”

“In this sense, further developments of relations seem possible both with the government and with the Georgian Orthodox Church. I am confident that these hopes will be realized and I am encouraged in this also by the warm meeting I had yesterday evening with His Holiness and Beatitude, Catholicos Patriarch of all Georgia Ilia II,” he said.

He also said that given small number of Catholics in Georgia, “it is only a limited number of areas where our Church can contribute to society.”

“But at the same time, I wish to assure you that the intention of all the Catholic communities present in Georgia… is to make efforts for the wellbeing of Georgian society, as a whole. Our communities continue to do this through their activities in the spiritual, cultural, educational, charitable and existential fields,” Vatican’s foreign minister said.

Georgian Foreign Minister thanked the Roman Catholic Church for its charitable activities in Georgia, carried out through Caritas Georgia, and also expressed appreciation for Archbishop Mamberti’s intention to visit village of Khurvaleti on the administrative boundary line with breakaway South Ossetia on September 16.