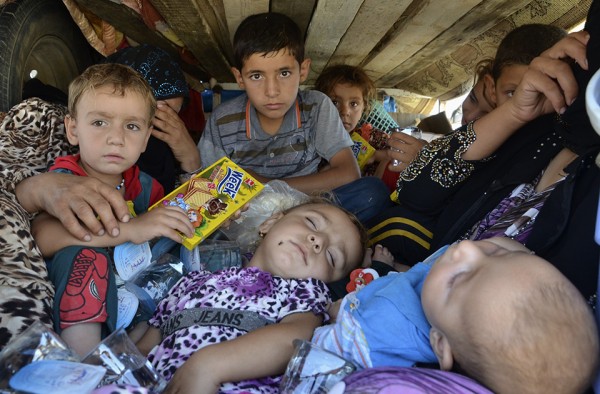 (Photo: Reuters) Displaced people, who fled from the violence in the province of Nineveh, arrive at Sulaimaniya province August 8, 2014

With more than 100,000 Christians driven out of Iraq, the plight of Christian persecution in the Middle East has only increased since Islamic State forces seized the region, according to a “60 Minutes” special report.

“There are few places on earth where Christianity is as old as it is in Iraq,” the report opens. “Christians there trace their history to the first century apostles. But today, their existence has been threatened by the terrorist group that calls itself Islamic State. More than 125,000 Christians — men, women and children — have been forced from their homes over the last 10 months.”

Islamic State militants invaded northern Iraq, primarily the largely Christian city of Mosul, in June and left Christians with an ultimatum: convert to Islam, pay a religious fine, or face death by the sword. The militants have declared swatches Iraq and Syria as their “Islamic Caliphate.”

Father Joseph Ibrahim is one of the last monks remaining at St. Matthew’s Cathedral, a few miles away from Islamic State territory in the Nineveh plains.

Father Ibrahim said his largest fear is an unexpected future, explaining Christians do not know what will happen but they “are expecting the worst.”

Nicodemus Sharaf is the Archbishop of the Syriac Orthodox Church in Mosul, now lives as a refugee in the Kurdish capital, Erbil. He was able to escape Mosul as Islamic State militants invaded.

The Islamic State has attempted to remove all traces of Christianity from the region, removing crosses and other structures from churches and buildings. Previous reports also have stated that the jihadists turned other historic buildings in Iraq’s Mosul, or modern day Nineveh, into religious courts to enforce sharia law.

“They take everything from us, but they cannot take the God from our hearts, they cannot,” Archbishop Sharaf told “60 Minutes.”

“Just like the Nazis marked the property of Jews, Christian homes in Mosul have been marked with this red symbol. It’s the Arabic letter N – for Nasara – an early Islamic term for Christians.”

Father Rony Hana explained that Islamic State militants use his church as their base and they have created such a fear that many of his churchgoers will not return to the region. The report describes the Nineveh plains, one of the birthplaces of Christianity, as a deserted region.

“Christians have lived here and walked these streets for over a thousand years. But today, there’s no one – they’re all gone. Driven out by fear. And one of the most striking things you notice is the silence.”