Source: Sputnik
Speaking at a liturgy dedicated to the 1,000th anniversary of the death of Vladimir the Great, known for introducing Christianity to Kievan Rus, Russian Orthodox Church Patriarch Kirill explained that the most pressing message of Vladimir's legacy is the need to save contemporary humanity from the idolatry of our time.
Natalya Mihailova | 02 August 2015 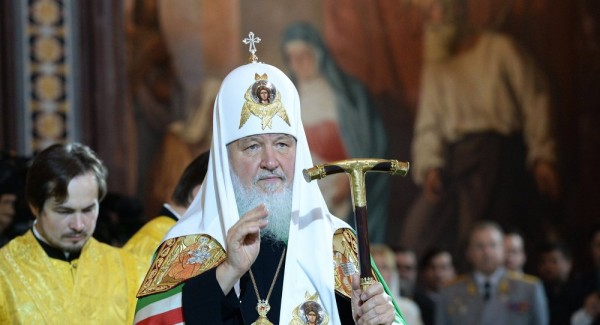 Speaking at the Cathedral of Christ the Savior in Moscow before worshipers and representatives of over a dozen representatives of Eastern Orthodoxy from around the world, Kirill noted that Vladimir made the decision to abandon paganism and convert to Christianity in line with the prevailing mood among his people.

“[Vladimir] received baptism from the emissaries of the Church of Constantinople in Korsun, present-day Sevastopol,” Kirill explained. “It was not possible for him to make such a profound turn, not only in his own soul, but also for many of his people, as a mere frivolity. His relationship to others, to the people, had changed, and around him the people themselves also began to change. This was probably the only case in our history where the recognition of the prince came from the depths of the peoples’ own lives. Who were the pagan gods of the Kiev pantheon? They were the man-made symbols of human passions and human turmoil.”

The patriarch noted that “the Christian ideal, with time, and not without difficulty, entered the lives of our people. We called ourselves ‘Holy Rus’ because the most sublime, authentic, unfading ideal of human life was the ideal of holiness.”

Kirill expounded that a thousand years after Vladimir’s death, humanity once again stands at the threshold of a spiritual choice. “Contemporary humanity creates idols far more terrible than those of the Kievan Perun, and we see how the world has been engulfed by crime, war, as if human life is worth nothing in our enlightened age.”

The patriarch noted that many people today have consciously rejected the ideal of holiness in favor of the “worship the ideals of self-gratification, consumerism, selfishness,” adding that others have been cast adrift and accept whatever “falls on them from the colossal information flow, no longer able to distinguish between good and evil.”

But Kirill also voiced his hopes for the future. “If we do not let our history, our culture, which emerged from this ideal, and which absorbed this ideal, turn back to those same idols, then we will have hope for the future –for the building of a peaceful, fair, equitable life, in the center of which is the immortal ideal of holiness, of human goodness, reason, generosity, love and hope.”

“Kneeling down before the memory of Prince Vladimir, we ask him to be with us, to enlighten our people, to help our youth realize the feats of all those who created Holy Rus and those who are ready to strive for this Rus in our time, and to struggle first and foremost with the sin which is inside all of us,” the patriarch concluded.

Celebrations Across Russia and the Orthodox World

The thousand year repose of Prince Vladimir is being celebrated on a national scale in Russia, and throughout the Orthodox world. In Russia the day serves as a double celebration, the festivities also devoted to the Christianization of Russia. The culmination of the two-day observance is taking place Tuesday in Moscow, when together with foreign bishops of the Orthodox Church, the Russian Orthodox Church remembers the life and works of Prince Vladimir. The Kremlin is also set to hold a gala reception for Church representatives hosted by President Vladimir Putin.

In its turn, the Moscow Patriarchate of the Ukrainian Orthodox Church, which remains Ukraine’s largest religious organization, is holding its own divine liturgy to Vladimir at the Kiev-Pechersk Monetary, headed by Metropolitan of Kiev and All Ukraine Onufry. Unfortunately, Ukrainian officials decided not to attend the event. For his part, President Petro Poroshenko and his wife attended a separate celebration at the St. Vladimir Cathedral of the Ukrainian Orthodox Church of the Kiev Patriarchate, which is unrecognized by the world Orthodox community. Following the Maidan coup d’état last year, relations between the Moscow and Kievan patriarchates have declined considerably, with the Russian-aligned Church outraged over UOC Patriarch Filaret’s comments urging the US and Europe to provide Kiev with assistance for its military campaign against independence and autonomy supporters in eastern Ukraine.

Celebrating Over a Thousand Years of Christendom

The Christianization of Kievan Rus began in 988, and is associated with Prince Vladimir, who has since been given the title ‘Great’ by the state, sainthood by the Church, and the epithet ‘Red Sunlette’ by the people. Vladimir, ruling Kievan Rus from 980 to 1015, abandoned paganism and accepted Christianity eight years into his rule.

According to the Primary Chronicle, emissaries from civilizations with differing faiths began traveling to see Vladimir beginning in 986, each of them attempting to convince the ruler to accept their own faith. Vladimir also sent out his own envoys to visit each of the nine nations from which the emissaries had come, asking them to describe the religious customs and rituals of these country. Vladimir’s marriage to Princess Anna, daughter of Byzantine Emperor Romanos II and Empress Theophano in 988, resulted first in his baptism, and then in the mass baptism of the residents of Kiev, rich and poor alike, thereafter. After Kiev, other cities of Kievan Rus were gradually Christianized, with the Christianization of what eventually became contemporary continuing into the 12th century.

Many historians believe that the adoption of the new, unifying faith became a serious impetus for the unification of Russian lands. The Christianization of Rus’ allowed Russia to find its civilizational identity, and its place between Europe and Asia.