Warming the Heart: The Orthodox Spirit in Everyday Life

For our generation today, we are faced with an opportunity to rediscover what still lies buried in the living memory of Orthodox domestic tradition - a tradition we must either rediscover, or lose forever to the bloodless world of sociology textbooks.
Archpriest Geoffrey Korz | 08 March 2009 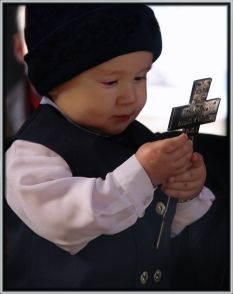 As a child in an Anglican household, the spirit of Lenten ascesis was summed up in the hot cross buns we ate on weekends. Anglicanism at that time still understood the idea that fasting should be more thorough during the weekdays or Great Lent, and somewhat relaxed for the weekend, although the actual observance of fasting during weekdays was often ignored. Hot crossed buns were on the shelves from March until the end of April, then like clockwork, they were gone.

The living memory of Christian life, of the nitty gritty business of actually living in pious remembrance of the Lord and His Passion, was still alive in those bygone years, in a way which impacted the supermarkets and breadboxes of the country. (For those not old enough to remember bread boxes, an Internet search should turn up something.). That common religious memory has waned in our day, to the extent that most young faithful are not just unfamiliar with the manner in which grandma did things: the fact that she did anything at all in her home life that reflected her faith is highly unlikely.

For young (and not so young) Orthodox, the situation is the same, if not worse. Eager to abandon a foreign culture to become mainstream Canadians, two or three generations have unloaded a treasury of religious memories and practices that at one time enhanced every moment of every day. For our generation today, we are faced with an opportunity to rediscover what still lies buried in the living memory of Orthodox domestic tradition – a tradition we must either rediscover, or lose forever to the bloodless world of sociology textbooks.

We must rediscover what we have forgotten: the spiritual songs and troparia faithful knew well enough to sing in the home, while working or washing their faces. In conversation, we would be blessed if we could recover references to saints and their lives, and the prayers they said at the baking of bread (a lost art today, but we can still slice a cross into each loaf before slicing it). All these little things warm the heart of the Orthodox life.

If we really hope to welcome the saints and their prayers into our homes, it would make sense that we would piously reverence their icons as we depart from our homes, and as we return. The same is true when visiting friends and family, who also bear the Lord’s Image, that we should as the apostle bids us, offer peace to the house as we arrive.

Out of love for our children and a care for the their future, we would bless their beds with the Sign of the Cross as they go to sleep, praying for them, that the Lord would deliver them from all evil, and bless them with health, and with a faithful future spouse. It makes spiritual sense to start with their crib.

Christian life in the home once found its way even to the dinner table, beyond mealtime prayers. Bread of any sort was always broken, and never cut – because the Lord broke bread, and told Peter to lay aside his sword (or knife). Scraps were put out for the birds, where such a practice is possible and safe, giving back to creation that which it gave. Common dishes were set on the table to be shared, since the Lord dipped His hand in the dish with His disciples: Christians didn’t have “my share” and “your share” of the food: they simply shared.

Each room became a tiny church, with and icon of St. Euphrosinos the Cook watching prayerfully over the kitchen, the Mystical Supper gracing the wall of the dining room, the Marriage at Cana or Saints Joachim and Anna in mom and dad’s room, and icons of everyone’s patron saint somewhere for easy veneration and prayer – or better still, all together for prayers as a family. By extension, even the computer or television would be blessed by the image and prayers of Christ’s saints.

With more and more commuters, and cities clogged with traffic, do we take the time to get our cars blessed? How about even making the Sign of the Cross before we start driving, or as we pass the flower-covered roadside crosses that mark the site of a automobile death.

In India to this day, children still seek the blessing of their parents, not just for marriage or other major decisions, but on a daily basis, before school and at bedtime. Such a practice is fundamentally Christian, yet it remains alive mostly in the memories and daily practices of Hindus and Muslims.

One must recognize, if Orthodox parents are not blessing their children with the Sign of the Cross, they can be fairly sure no one else is, either. And if we are not actively taking time, moment to moment, to warm our hearts and the hearts of our children by the embers of Orthodox practice still given us by God’s grace, we can be sure that our hearts will not remain warm for long at all.