We are All Called to Be Apostles of Christ

After Pascha, people complain of ‘Post Paschal’ depression. After the intensive prayer life during Great Lent, frequent church services, fasting, Confession, doing good deeds for others in a special way, and the great spiritual, emotional and psychological build up to the celebration of Pascha, the Feast of Feasts and celebration of all celebrations, it’s logical that people would feel a sort of let-down after all that. Some people feel a real void and find it truly difficult to re-integrate themselves into their postlenten life.
admin | 16 May 2011 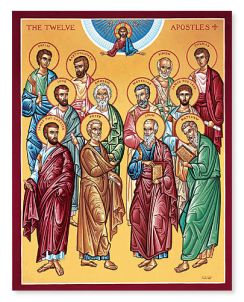 After Pascha, people complain of ‘Post Paschal’ depression. After the intensive prayer life during Great Lent, frequent church services, fasting, Confession, doing good deeds for others in a special way, and the great spiritual, emotional and psychological build up to the celebration of Pascha, the Feast of Feasts and celebration of all celebrations, it’s logical that people would feel a sort of let-down after all that. Some people feel a real void and find it truly difficult to re-integrate themselves into their postlenten life.

The Apostles gathered in the upper room later on the day of the Resurrection, and, huddled there in fear, in walked Jesus through the door. And a week later, Jesus came in again to appear once more to Saint Thomas, putting an end to his doubts. The Myrrhbearers, as they neared the tomb early on the morning of the Resurrection, were met by an angel who said to them that they should not be looking for The Living One in the tombs, but gave them the order to go proclaim the good news that Christ is Risen. And the Paralytic, who waited 38 years for someone to put him in the water when the angel stirred it up, was met by Christ who told him to take up his bed and walk – and who met him later in the Temple and told him to go and sin no more lest something worse happen.

In all three of these Gospel lessons, we see people who had been stopped from spreading the Good News of Christ, His Holy Gospel, and who were healed by our Lord or by the Holy Spirit.

At the time of a man’s ordination to the priesthood, the Bishop lays his hands on the head of the priest-to-be, praying ‘the Grace Divine, which heals that which is infirm, orders all things and fills all that is wanting,’ elevates N to be a priest. It’s this same Divine Grace which healed the Paralytic, set straight the Myrrhbearers and provided for the weaknesses of the Apostles and gave them courage to face the world and to preach to all nations, baptizing them in the Name of the Father, Son and Holy Spirit. That same Divine Grace, which we all received at Baptism and shared again at Pascha, heals us and gives us the gift to make up for our shortcomings and even heals our physical and spiritual illnesses, gives us the command to go and preach the Good News of Christ’s Resurrection to the entire world.

Perhaps we’re not all called to be apostles, preachers, ascetics, confessors, martyrs, or other saints who function in very open and dramatic ways, but we are all called to be the friends, co-workers, children and apostles of Christ, showing the Good News as the motivating force in our lives so strongly that people would look at us and say ‘there goes a true Christian’! Christ is Risen! and we have work to do! Since we believe in the Risen Lord, we have no more shortcomings, laziness or illness. Let us all live this commandment of our Lord to teach everyone His Good News, which fulfills the Resurrection and shows it through us to the whole world.

The celebration of the Greatest of Feasts, the Resurrection of our Lord, has passed for this year. But we are all called to do as the Apostles and Disciples of the Lord did after the Resurrection. The Lord said that He will send the Comforter, the Spirit of Truth. He said that, “The world cannot accept Him, because it neither sees Him nor knows Him. But you know Him, for He lives with you and will be in you.” (John 14:17) The Lord promised that the Spirit will teach us all things. The Lord promised that the Holy Spirit will be with us forever, living in the Church, available and accessible for every Christian. The Holy Spirit was given to us on the Day of Pentecost and of our individual Baptisms.

It only makes sense that the Lord sends us the Spirit so that we can be useful. The Holy Spirit is never sent into a void, but only into hearts burning with the Love of God, desiring to continue the work that Our Lord began. This is our function as Christians. He sends us out into the world, to work and teach and help and be kind and generous, as a Divine command. “Go ye therefore and teach all nations…” He commands us.