Source: Aid to the Church in Need
Natalya Mihailova | 19 April 2016 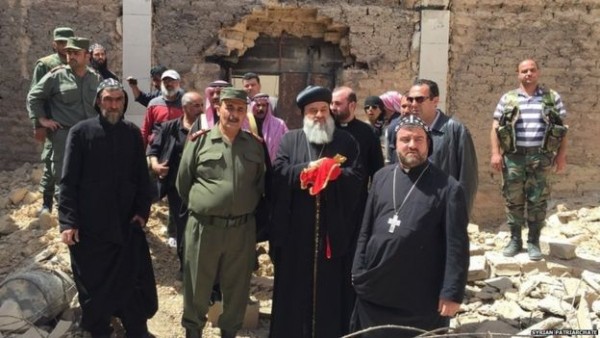 After visiting the Syrian town of Al Qaryatayn, which had just been liberated from IS, the Syriac Orthodox Patriarch Ignatius Aphrem II said he had mixed feelings. Talking to the Catholic pastoral charity Aid to the Church in Need (ACN), the church leader who resides in Damascus said on Friday 8th April, on the one hand, he was happy about the expulsion of the terrorist militia from the town where Muslims and Christians live. The terrorists had occupied Al Qaryatayn last August. “This is certainly an encouraging development. But the residents who had fled now sometimes wept when they saw what had become of their town. It was particularly painful for me as someone with pastoral duties to see these tears.” The Patriarch went on to say that the infrastructure had been severely damaged. “When I managed to visit the town with our Catholic brothers on Friday I was shocked by the extent of the devastation. Many houses had been completely or severely damaged during the fighting. Fittings had been stolen,” the Head of the Syriac Orthodox Church explained. “It was especially painful to see how the churches had been wilfully defiled by IS. Both the Syriac Catholic Saint Elian monastery and our Syriac Orthodox church had been deliberately desecrated. Our church was even more severely damaged than the monastery.”

The Patriarch stressed that the visit he made together with Catholics on Friday had been an important signal. “At times like this we Christians must stick together. IS wants to kill us all regardless of a Christian’s church affiliation,” Ignatius Aphrem said. “During my visit my main concern was to give people hope. I told them that they should thank God for their lives. Houses and churches can be built up again. A life lost cannot be restored. But as a Church we will not simply talk about it; we will also give the people material help in their reconstruction efforts wherever we can. The crucial factor is the faith that God is with us. Our help is given in the name of the living God.” The Patriarch also conceded, however, that it was very difficult in situations like this to bear Christian witness and to forgive one’s enemies. “In view of our circumstances it is not easy to overcome hatred and to ask God for the gift of forgiveness. It will take time for people to find it in themselves to do this. This is only human and understandable. But we can’t get round the willingness to forgive. It is a basic element of Christian life.”

The Patriarch emphasized in this connection that the Syrians were experienced in the co-existence of the religions. “In Syria there is no war between Christians and Muslims. What we’re dealing with here is primarily foreign terrorists coming to fight the jihad. There are certainly now Syrians who have adopted the jihadi ideology. But these ideas come from outside, primarily from Saudi Arabia and the Wahhabism practised there. I therefore do not see the reconciliation between Syrians of different faiths as the problem here. This is possible. After all, despite the many difficulties we all lived peacefully together before the war in Syria. That was the Syria we knew.” In view of the efforts of the United Nations to bring about a political solution to the conflict by holding discussions between the government and the opposition, the Patriarch said: “If we Syrians settled things between ourselves, there would be no problems, I believe. But we are not naïve. The difficulty of a political solution is that there are both regional and international interests which come together in Syria. This makes the situation so complicated.” Ignatius Aphrem II expressed scepticism about the representatives of the Syrian opposition negotiating with the government in Geneva. “Of course, I hope that the talks will be successful. But the opposition there does not have many adherents here in Syria itself. What’s more, there are many islamists among them. We Christians and others do not want to live under Islamic rule.”

Patriarch Ignatius Aphrem assumes that about 40 percent of Syria’s Christians have now left the country and fled to the neighbouring countries or to the west. “I have no illusions. Most of them will not return. If it goes on like this, we Christians in Syria will disappear, just as we have almost disappeared in Turkey and Iraq.” The Patriarch therefore rejects any emigration of the Christians furthered by the west. “The best way to support us is to help us stay in our homeland. Moving to the west is not a solution. Being a refugee in Europe is not a positive experience. It means you are culturally uprooted. It’s not good for the refugees and it’s not good for the societies that take them in.” The Patriarch explained that both in Syria itself and in the neighbouring countries there were safe refuges for the people. “It would be much cheaper for Europe to help our people to stay in Syria, or temporarily in Lebanon or elsewhere. It would be important mainly to help the projects of the church on the spot. We are very grateful to Aid to the Church in Need for adopting this approach and helping people on the spot. I hope that more organisations will follow this example.”

Since the outbreak of war in Syria in 2011, ACN has donated a total of more than $16 million to its local church project partners for pastoral and humanitarian aid. The aid work is primarily focused on supporting the many internally displaced persons.