We Live on the Threshold of the Divine Kingdom

Some people, even though they admit that God exists, do not hurry to come to Church, do not hurry to repent over their sins, and do not hurry to rethink their lives because they excuse themselves saying that there is still time. They say, for example, "I will have time. Of course I need to repent and of course I need to change my life for I can't always live the way I live now, but there is still time and I have much to do, such as this and that and that..."
Patriarch Kirill of Moscow and All Russia | 02 June 2011 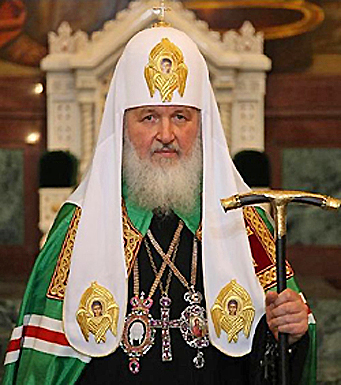 Today is the feast of the Ascension. We remember an entirely unique event in the Gospel that completes the earthly sojourn of our Lord and Savior. After His Resurrection, having appeared many times before the Holy Apostles, showing them the wounds of His hands, feet, and ribs, eating food with them and teaching them the mysteries of the Kingdom of God, the Lord leaves His disciples at some point. This happens in a unique way—on the Mount of Olives, not far from Bethany, a cloud received Him, as we just heard from the Book of Acts. And the disciples understand that their Teacher is taken up, ascending to Heaven.

Why did the Lord need to be taken up? For as God is He not beyond time and beyond space? If He had wished to withdraw Himself in a visible way from the history of mankind as Jesus Christ from Nazareth, He could just have become invisible, all the more that He did become invisible many times after the Resurrection leaving His disciples in that way. Of course all of this was possible for God. But there is an immense meaning in the very act of the Ascension. Firstly, this is the end of the Lord’s sojourn on earth, for if He had become invisible, this might have caused dangerous consequences for the life of the first Christian community. Even before His death the Lord had said that the time would come when many would say, Lo, here is Christ, or there is Christ and that He is in the secret chambers and the Lord added, believe it not, it will not be so (Matthew 24:23-26). So that no one would ever be able to say, here is Christ or there is Christ, the Lord leaves His disciples and this visible world in a visible way.

There is also something very significant in this moment of the Ascension. There was no human glory in the life of our Lord. Only once, when He was walking to His Passion in Jerusalem, did the people, being impressed by the fact that He had raised Lazarus from the dead, meet Him as Victor, cried Hosanna to the Son of David, and spread their garments (Matthew 21:8-9). But that was vain, human honor and glory, and the Lord, as we know, did not accept that veneration. He did not take part in this human triumph, knowing its vanity and knowing how soon the peoples’ attitudes would change: those who were glorifying Him at that moment would demand His execution from Pilate in a few days.

The completion of the events of the Gospel is a visible triumph, a visible victory of the Savior. At the moment of the Resurrection, there was no witness in the sepulcher. The Apostles only saw signs of the Resurrection, but no one saw the very Resurrection of the Savior from the dead—this was God’s mystery. Of course, all Divine power and glory of the Savior rising from the tomb was manifest, but the human race was not allowed to see that glory. Nevertheless, the Gospel was completed with a triumph, with a victory. All goals were fulfilled: the human race was redeemed, the devil was conquered, and evil was trampled upon. God is victor together with man in Jesus Christ, and the visible expression of this glory of the Savior, of this victory of the God-man is the bodily Ascension of the Savior—God and man in the one Person of the God-man Jesus Christ completed that salvation. 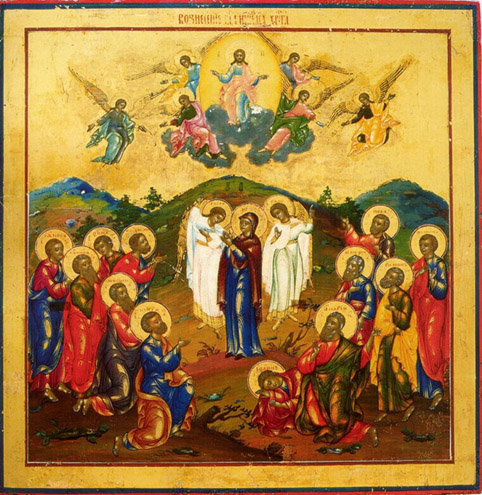 When the apostles were standing amazed by that spectacle, two men, that is, angels, approached them and asked, Ye men of Galilee, why stand ye gazing up into heaven? this same Jesus, which is taken up from you into heaven, shall so come in like manner  (Acts 1:10-11). One can imagine what those words meant for the apostles. They went to Jerusalem rejoicing. It seemed to them that a day, or two, or three, or maybe a week or a month would pass and the Savior would come. In such intense waiting for the Lord, the first years of the Christian community would also pass…

But one day is with the Lord as a thousand years, and a thousand years as one day (cf. 2 Pet. 3:8), and there is an immense meaning in this expectation of the Savior. We do not know how much physical time will pass, how many times the earth will go around the sun before the Lord will fulfill His designs. This is not that important because there is no time with God. But it is important for us to understand that we live on the threshold of the Divine Kingdom and, therefore, everyone should prepare themselves for their encounter with the Savior. This does not mean that everyone will witness His second coming, for no one knows when this will happen. However, every one of us, having crossed the border of life and death, will stand before God face to face. That will be His second coming for us. And, therefore, the hope of the Holy Apostles and their joy about meeting the Lord soon was not left unfulfilled: they saw the Lord very soon, having given their lives up for Him and for preaching His Gospel.

Thus, if we live our lives having this in mind, if we learn to look at history and not just see the fleeting moments of human history, if we cultivate in ourselves a spiritual outlook that pierces through the centuries and crosses over into eternity, then we will realize that these holy times are coming for each one of us who will stand before God after their death.

No one knows and no one can know at what moment they will stand before the Lord. Therefore, we need to live in such a way that, at any moment, we would be glad to meet the Savior and not to be frightened to death when we realize that life is over and the battle is lost, that time has been vainly wasted and the most important thing has not been done… One must live so that their encounter with the Lord would be just as joyful as that for the Holy Apostles who remembered the angels’ words on the Mount of Olives.

The Feast of the Ascension is an eschatological feast which refers our thinking to the future. At the same time, it is a very personal feast because it concerns not only human civilization, not only the whole world but each of us. Namely, on this day, maybe more than on any other day of the year, we should think about our own life, our own death, about our standing before God, and about our judgment. If such thoughts will not just pass through our minds on the occasion of the feast but will affect our outlook and our lifestyle then we will repeat the life of the Holy Apostles and await the coming into the world of the Savior with joy. Amen.

Delivered May 13, 2010, in the Great Church of the Ascension at the Nikitskiye Gates in Moscow.

Translated from Russian by Svetlana Brooks