Source: The Antiochian Orthodox Christian Archdiocese of North Americ
Natalya Mihailova | 05 August 2016
Flood victims in West Virginia have expressed their gratitude to His Eminence Metropolitan Joseph for offering prayers and support in relief of wide-spread devastation to the state on June 23, 2016. 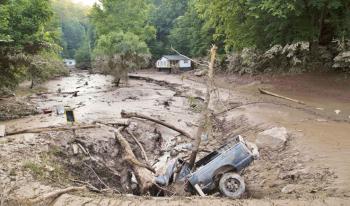 The V. Rev. Samuel Haddad of St. Nicholas Orthodox Church in Beckley addressed those assembled at the Archdiocesan Clergy Symposium this week to offer to His Eminence Metropolitan Joseph, His Grace Bishop Thomas, all of the hierarchs, and our clergy for their support for the suffering people in West Virginia who were devastated by the recent flood. Twenty six lives were lost and as many as 4,000 homes were catastrophically damaged; 2,000 homes were completely destroyed. The storm has been called a “once in 1,000 year meteorological event.”

Father Samuel also thanked Dan Christopulos, the International Orthodox Christian Charities (IOCC) country representative for USA, and the entire IOCC emergency response team for their incredible leadership and material support. Along with bringing their Emergency Response van that was used in a clean-up operation, Dan and the IOCC provided 500 cleanup buckets valued at $28,000, and much needed school supplies valued at $9,000, to aid a school that was devastated in the flood. Most importantly, the IOCC team offered emotional and spiritual support for the victims and the weary volunteers. (Read more about the IOCC’s work in West Virginia.)

Finally, the people of West Virginia are most grateful to the parishes of the Antiochian Orthodox Christian Archdiocese for their generous donations for flood relief in West Virginia as requested by His Eminence Metropolitan Joseph.

Each of the Orthodox parishes in West Virginia including St. George Cathedral in Charleston, Holy Spirit Church in Huntington, along with St. Nicholas Church in Beckley, have been actively working in flood relief efforts. The restoration of the affected communities will be ongoing for many years to come. The commitment of our churches is to do what can be done to address this long term need. Please pray for West Virginia, that God will be merciful to them.