What Are Temptations For? 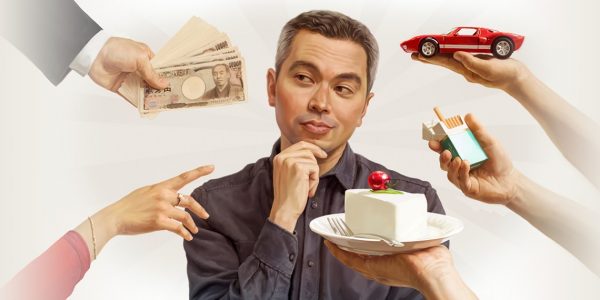 1 Then was Jesus led up of the Spirit into the wilderness to be tempted of the devil.

2 And when he had fasted forty days and forty nights, he was afterward an hungred.

3 And when the tempter came to him, he said, If thou be the Son of God, command that these stones be made bread.

4 But he answered and said, It is written, Man shall not live by bread alone, but by every word that proceedeth out of the mouth of God.

5 Then the devil taketh him up into the holy city, and setteth him on a pinnacle of the temple,

6 And saith unto him, If thou be the Son of God, cast thyself down: for it is written, He shall give his angels charge concerning thee: and in their hands they shall bear thee up, lest at any time thou dash thy foot against a stone.

7 Jesus said unto him, It is written again, Thou shalt not tempt the Lord thy God.

8 Again, the devil taketh him up into an exceeding high mountain, and sheweth him all the kingdoms of the world, and the glory of them;

9 And saith unto him, All these things will I give thee, if thou wilt fall down and worship me.

10 Then saith Jesus unto him, Get thee hence, Satan: for it is written, Thou shalt worship the Lord thy God, and him only shalt thou serve.

11 Then the devil leaveth him, and, behold, angels came and ministered unto him.

12 Now when Jesus had heard that John was cast into prison, he departed into Galilee;

13 And leaving Nazareth, he came and dwelt in Capernaum, which is upon the sea coast, in the borders of Zabulon and Nephthalim:

14 That it might be fulfilled which was spoken by Esaias the prophet, saying,

15 The land of Zabulon, and the land of Nephthalim, by the way of the sea, beyond Jordan, Galilee of the Gentiles;

16 The people which sat in darkness saw great light; and to them which sat in the region and shadow of death light is sprung up.

17 From that time Jesus began to preach, and to say, Repent: for the kingdom of heaven is at hand.

18 And Jesus, walking by the sea of Galilee, saw two brethren, Simon called Peter, and Andrew his brother, casting a net into the sea: for they were fishers.

19 And he saith unto them, Follow me, and I will make you fishers of men.

20 And they straightway left their nets, and followed him.

21 And going on from thence, he saw other two brethren, James the son of Zebedee, and John his brother, in a ship with Zebedee their father, mending their nets; and he called them.

22 And they immediately left the ship and their father, and followed him.

23 And Jesus went about all Galilee, teaching in their synagogues, and preaching the gospel of the kingdom, and healing all manner of sickness and all manner of disease among the people.

25 And there followed him great multitudes of people from Galilee, and from Decapolis, and from Jerusalem, and from Judaea, and from beyond Jordan.

Fasting plus unpleasant events equals ‘temptation’. Usually it is within this context that this concept is recalled. But were the proposals of the devil who tempted Christ unpleasant? Or does the problem lie elsewhere?

The word translated in the first verse as ‘temptation’ should rather be translated as trial. Temptation is what tries us, tries our dedication to God. The main difficulty of temptation is that it is hard to recognize it, if there is no spiritual experience. Because something suggested by the devil pretends to be good and even righteous.

But that is suggested by Satan, which means there must be a catch. Christ knew that it was Satan, but we do not always know it when we are tempted. But why does Christ reject a temptation and thus pass the trial?

Because He is looking at everything being suggested from the right point of view.

Christ does not need to prove anything to anyone about Himself. He came into this world not to thump His chest and scream ‘Look at me, I am the Son of God!’. He came to serve His Father. He knows that He is the Son of God and He does not have to prove it to anyone. Therefore, He has the power to reject the second part of the temptation – about bread.

He knows that Father cares about Him and does not demand any proof from Him. He does not fall for distrust disguised as faith. That is why He does not jump down. There will be a moment when He will need all his Faith to remain faithful to His Father. In Gethsemane. This is preparations now.

The third temptation is the quintessence of temptations per se. During any temptation the devil says – listen to me and not to God, bow to me – and then you will get untold benefits. The serpent in Eden said the same to Eve. “You will be like God, you will not surely die”

And such is the God’s idea that we become like God. As the fathers said “God became man so that man might become God”. But that had to be reached by following the way pointed out by God. By listening to Him. And then there would be no death, no diseases, no sins.

Coming to us, the devil disguises bad as good too. Pity or desire to ‘save’ is disguised as love. Submission and despondence are posed as humility and obedience. Anger is passed off as courage and honesty. And if you dig deep enough, you can see egocentrism instead of God-centrism everywhere.

Pity makes you feel superior. We are often submissive, because we are afraid to lose someone’s affection. Or we are just afraid. Anger often comes from offended ego – it is in this state that it is so easy to badmouth ‘honestly’.

We often take temptation for our own desire. But we are often not equal to ourselves. And here it is important to find your own center and be honest with yourself – how do I feel about it? Do I really want it? How does it correlate with my faith in God and my service to Him?

And if you have managed to reject something that is not yours or God’s, there comes a wonderful moment – beginning the service. That is the transition to the next level. The point of any trial is to pass it and become stronger. That is why God allows temptations. A person who recognizes the temptation and overcomes it, has something that he can give to others. He can really love and serve – without pride, anger, and desire to please, without passion for self-affirmation and distrust of God.