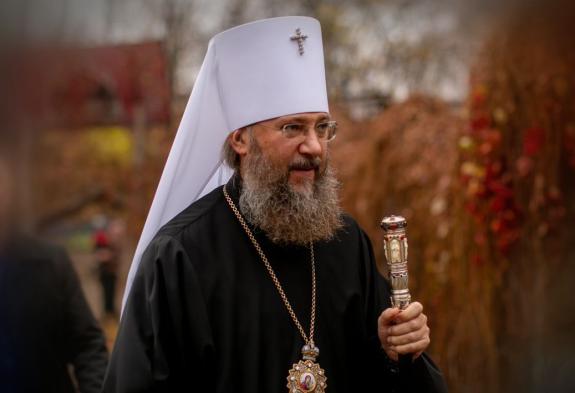 – Your Eminence, many believers are interested in the question, “What will happen if the schismatic Orthodox Church of Ukraine will continue getting recognition from other Churches, what will follow the aggravation of the schism?”

– The Church has experienced similar upheavals many times in its history. People tried to destroy it, split it apart, drive it into catacombs, but they failed. Temporary difficulties strengthened true believers, the Church survived under any conditions.

Current events cannot be compared to persecutions of the Soviet era or the martyrdom of the first Christians, when a matter of faith to Christ and the Church was a matter of life and death.

Today they are trying to intimidate us, and it is a pity that such primitive methods of pressure have had their effect on some representatives of Local Churches.

– Was the betrayal of primates of the Churches of Greece and Alexandria a surprise?

– I would not say that it was an unexpected surprise for us. We knew that Local Churches (especially Greek ones) were being influenced and weak spots were sought after, that is they were put under pressure. Unfortunately, some of them did not withstand it… What is there to say?

Konstantin Simonov, a writer, journalist, war veteran, has a novel “The Living and the Dead”, which describes behavior of people in the first days of the Great Patriotic War: from confusion and fear to unconditional faith in victory.

The war revealed the true faces of people: those, who claimed before the war that they would stand to the end and it would be an easy victory, were the first to run in fear of superior forces of the enemy, having chickened out at the first sign of danger, they gave up positions and let the enemy advance further; but there were also those, who kept fighting silently, with clenched teeth, understanding that they could not yield to the enemy, and despite unequal forces they withstood the onslaught of the enemy at the cost of their lives. And won.

“Without faith, without honor, without conscience”, – spoke Simonov about cowards and betrayers, about those, who spread panic and set degrading mood among soldiers. These words are relevant today in relation to those, who got cold feet and lost faith in the ultimate Victory.

The living and the dead are you and me. You can talk a lot about your faith, but actually turn out to be a living dead, a coward, or you could do your job silently, without grand loud-voiced words, bravely remaining faithful to Christ.

Betrayal is never pleasant, but it is not a reason to despair. Masks have been ripped off, everyone has shown their true colors. And the Church definitely benefits from this.

The main positive feature of the present time is the conscious choice of every believer, conscious faith. That means a lot.

The schism became the watershed of our life before and after the schism.

Believers became sincerely interested in their faith, the history of their Church. It means a great deal!

As true believers, we will carry our faith to Christ, His Church, and commandments through all trials and tribulations. It is our sacred duty.

I hope, many of those, who have made a mistake, would come to their senses sooner or later, but in any case it is on their conscience. Our duty is to serve Christ and the Church without hesitation.

Many people live and do not realize what a grave sin has entered their lives, bounded their hearts.…

Metropolitan Anthony (Pakanich) speaks on vanity and the ways of overcoming it.

Recently, journalists published a draft Concept for the reform of the Civil Code of Ukraine, which, among other…

Most viewed articles
Healing the Inner Pharisee194
Being of One Mind: What It Is and Isn’t128
How Ural Residents Survived a Blizzard64
Patriarch of Serbia Visits the Orthodox Grammar School in Zagreb42
A Hunger For God’s Presence42
In the Father’s House the Prodigal Son Remains Loved35
Most popular authors
Archpriest Stephen Freeman194
Archpriest Michael Gillis128
Irina Sycheva64
Pravmir.com team42
Fr. James Guirguis42
Metropolitan Hilarion (Alfeyev)35