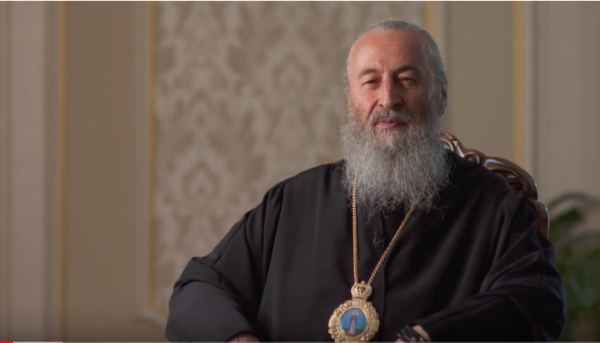 His Beatitude Metropolitan Onuphry said that a Christian should always strive for truth, since the truth is eternal, while the lie is temporary.

On June 8, 2019, the 34th production of the weekly program “Word of the Primate” was broadcasted by Inter TV channel. It is reported by the Information and Education Department of the Ukrainian Orthodox Church (UOC).

In this program, the Primate of the UOC, His Beatitude Metropolitan Onuphry, noted, “the Lord created the Church, which is a spiritual ship, leading a man through the stormy sea of ​​earthly life to the eternal goal of salvation. But the devil, knowing that the Church was a ship of salvation, began to fight against the Church.”

According to His Beatitude, at first people tried to destroy the Church through the physical extermination of Christians. However, says His Beatitude, “as the early Christian writer Tertullian wrote, the blood of the martyrs became the seed of Christianity. One Christian died – ten appeared instead. As early as the beginning of the 4th century, the Edict of Milan was adopted and the Church began to exist officially and legally.”

It was at that time, as the Archpastor noted, that the devil “began to stir up heresies and schisms” in order to destroy Christianity in an alternative way.

In addition, Metropolitan Onuphry spoke about the First Ecumenical Council, which took place in 325 in Nicea with the participation of St. Nicholas the Wonderworker and St. Spyridon of Trimythous, at which the heresy of Arianism was condemned and the first seven lines of the Creed were composed.

Recalling the “Disgrace of Arius” by St. Nicholas, His Beatitude stressed that the hierarch did this “not for himself, but for the glory of God”.

The Primate of the UOC also noted, “At the Nicene Council, the Holy Fathers defended the purity of the concepts of God. But the heresy of Arianism did not cease to exist and almost embraced all civilized humanity. The leader of the Christians was St. Athanasius and after his death – Basil the Great. There were few Orthodox but they won, because truth always triumphs over lies.”

Metropolitan Onuphry stressed, “The truth is eternal, while the lie is temporary. Truth leads to God, whereas lying leads to death. Today we honor the Holy Fathers of the First Ecumenical Council and ask them to help us, instruct us, direct us to keep the purity of the Orthodox faith, which opens the doors of Paradise for people and leads them to eternal salvation in heaven.”