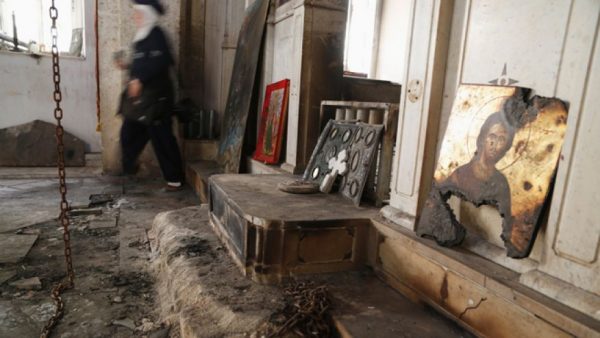 A woman walks inside a damaged church in Maaloula. Photo: REUTERS Omar Sanadiki

It’s shocking to our Western eyes.

As I walked through the burned-out shell of a church near Mosul, Iraq, just a few weeks ago, our translator told me that the Islamic State of Iraq and Syria graffiti scrawled on the walls read, “You love life, we love death.” Members of ISIS had painted their flag and written, “We have come to drink your blood.”

It’s one thing to destroy a building, but Christians are dying for their faith. And it’s not just in Iraq.

On Palm Sunday, a week before my Iraq visit and nearly 1,000 miles to the west, bloodied pews, sobbing parishioners and crime-scene tape wrapped around churches in Egypt where bombs had exploded in the middle of Sunday services. What should have been a joyous time of worship as followers of Jesus prepared for Easter turned into a murder scene for families who were assaulted because of their Christian faith.

These heinous acts by ISIS captured headlines around the world, but if you think this kind of persecution is rare, perpetrated almost exclusively by extremists and terrorists — and in few areas of the world — 215 million Christian victims will tell you nothing could be further from the truth.

For years I have traveled in Sudan, where we rebuilt hundreds of churches destroyed by Muslims. We opened a Bible school there to train new pastors to carry on the work of those who were killed.

The persecution of Christians is not just happening in places like Afghanistan, Iraq, Sudan and other hotbeds of extremist ideology. It may come as a surprise that some of our neighbors and allies are on the list of perpetrators.

For example, did you know that not only is Mexico among the top 50 countries where Christians face the most persecution, but 23 Christians were recently killed by drug cartels there, specifically because of their faith? And just a couple of years ago, local authorities in Chiapas drove more than 150 Protestants from their community, effectively stealing their land and leaving them without food.

Also consider the Christian refugees across Europe, including 88% of those surveyed in German shelters, who have experienced religiously motivated persecution — 32% of whom have received death threats. In the United Kingdom, some Christian converts from Islam are even under armed police protection because of death threats, according to Barnabas Aid.

That is in Europe, which serves as a predictor for much of what we can expect to happen across the rest of the West.

In Egypt, the problem is not the result of terrorists alone. Coptic Christians, the largest Christian community in the Middle East, are subject to government-enacted blasphemy laws, bureaucratic roadblocks to erecting churches, and routine rejection from well-deserved advancement in careers and even sports.

Some countries use anti-terrorism laws to broaden police powers which, in turn, have brought about the persecution of Christians. Some countries have used blasphemy laws.

Indeed, more than 75% of the world’s population live in areas with severe religious restrictions, and 215 million believers suffer “high, very high or extreme persecution” in the 50 countries where it is most difficult to be a Christian, according to Open Doors USA and the Pew Research Center.

How is it in this “enlightened” age, with 24-hour news and immediate reporting on the Internet and social media, that governments and people around the world are not uniting and marching in the streets to demand an end to the unjust treatment of people being targeted because of their religion?

We must give voice to those persecuted, educating the world about rampant and unchecked oppression.

That’s why this week, the Billy Graham Evangelistic Association, in partnership with Samaritan’s Purse, is bringing more than 600 persecuted Christians and advocates from 130 countries to Washington for our first ever World Summit in Defense of Persecuted Christians.

We are providing a platform for firsthand stories of persecution to be heard, collected and documented. We are connecting victims, advocates, leaders and influencers to create partnerships that can help bring about change.

This effort in our nation’s capital will not solve the global problem overnight, and that is why we need government leaders, the United Nations and American citizens to take a stand for those who have faced beatings, torture, imprisonment, rape and even death.

Regardless of whether you are a person of faith, religious freedom is one of our country’s foundational values. Will you raise your voice to help those who are being persecuted because of their faith?