What Does It Mean to Be a Christian in the 21st Century?

Jim Forest, an Orthodox author and, together with his wife Nancy, is co-Secretary of the Orthodox Peace Fellowship of the Protection of the Mother of God. He is also editor of the journal In Communion.

The two great events of history are Christ’s Nativity and His Resurrection. He who made us became one of us, lived with us, cared for us, died with us, and rose from the dead on our behalf. As a consequence, in baptism we are made into Paschal beings. Christ’s resurrection — if we dare to participate in it — means that we are free to live a life that is not shaped by death. Instead of living in fear, we can love — love God (harder than it sounds) and love our neighbor (much harder than its sounds). Who is our neighbor? Whoever God puts in front of us — friend, stranger or enemy. Loving our neighbor means doing what we can for him, even at a personal sacrifice. It means not seeing the other first in terms of religion or nationality but as a relative, another person bearing the image of God. If you love someone, you don’t kill him or leave him to die. Christ laid down his life for the life of the world. We are called to do the same.

Paradoxically, being a Christian in the 21st century must mean — not being set apart.  The world, at this juncture in history, seems be more connected than ever, but not more united.  We are more in touch with one another, but also more “out of touch.” In the midst of this separateness and alienation, the Christian must reflect the radical accessibility of Christ.  He consistently declined to honor the prevailing mores of distinction  — Roman, Levite, leper and tax-collector — and bade all to come to Him.  He projected a version of humanity in which there was to be ‘neither Jew nor Greek…bond nor free…male nor female.’  Today, we could say, ‘neither Serbian nor Kosovar, neither Hutu nor Tutsi, neither liberal nor conservative.’  The overarching love of God, who by His grace can heal divisions, heal wounds and heal hearts, should be the stamp that each Christian bears. 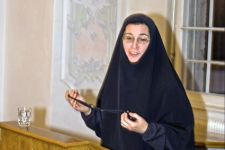 To be a Christian in the 21st century means precisely what it always meant: to love the Lord our God with our entire heart, mind and soul, and to love our neighbor as ourselves. Is the love of Christ and neighbor central to our parish life; our activities in the church or at home or at work; our everyday dealings with family, friends, and strangers? Does it instruct our thoughts, feelings, conversations, email and blog correspondence? Is it even central to our liturgical lives? Loving God means dedicating time to Him, day in and day out. How much time do we dedicate each day to prayer; to opening our hearts to God, thanking Him and glorifying Him, and contemplating His salvific word? This is possible both privately and publicly, while riding in the subway, sitting in the office, cooking for the parish fund-raiser, or shopping in the grocery store. As modern-day Christians we could examine our lives with such questions daily. As for the second question, “What can define us as Christians in the 21st century, that would also set us apart from non-Christians,” – the answer has likewise not changed since the Founder of the Church gave it: “By this all will know that you are My disciples, if you have love for one another” (John 13, 35). 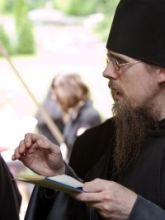 “Seek ye first the Kingdom of God and his righteousness, and all these things shall be yours as well” (Matthew 6:33). By obeying this commandment, a twenty-first century Christian must order every facet of his life according to criteria completely opposed to the ways of the world, and the same was true for Christians in the nineteenth, eleventh, eighth, or second centuries. Every age, however, faces its own particular and unprecedented challenges. Chastity and Silence are two Christian virtues (among many others) which in our day we must take pains to guard dearly. Their opposites are lust and noise, and our culture and our lives are full to overflowing with them.

Lust, like any other passion, has always been a contender for the loyalty that man owes only to God, and the Internet has made this form of faithlessness effortlessly convenient and shamelessly anonymous. However, man is no longer content with “conventional” lust. Ours is an age of a profound human identity crisis. Having rejected God, in whose Image we are created, we no longer know who we are, and so we want to reinvent ourselves – perhaps every ten years or so – redefine our nature, indeed, become our own creators. Nowhere is this more evident than in the delusion about human sexuality and reproduction that is strangling our society. Feminism and homosexuality have taught us that the differences between male and female are accidental and irrelevant. Contraception, abortion, in vitro fertilization, and surrogate parenting have encouraged us to separate the natural connection between sex and procreation. Transsexuality, together with other forms of mutilation, offers false hope to unhappy people who desire to reject their own bodies in an attempt to find their “true” selves. And abortion, euthanasia, and human embryonic stem-cell research allow the strong to determine the value or usefulness or “quality of life” of the weak.

None of these horrors should be given a comfortable home in the life of a twenty-first century Christian. But this raging madness, like all the passions, is a fire consuming our society. So we need a fire extinguisher: silence, both exterior and interior. You cannot fight fire with fire, yet we fill our lives with a multitude of clamoring voices: radios, the Internet, ipods, video games, cell phones, and televisions, bringing us talk shows, movies, sportscasts, music videos, live concerts, debates, war, anger, entertainment – distraction, unedifying and lewd. Our lives are so full of it that we are oblivious to the turmoil and rancor inside us, the logismoi eating away at our minds and hearts and fragmenting our souls – and we swim in this oblivion as in an opiate. If we are attentive to him, God can restore us to our original unity and beauty. But his is a “still, small voice,” (1 Kings 19:12) that cannot be heard over the world’s blaring din or our own churning thoughts. Christ warns us: “What I say to you, I say to all: watch” (Mark 13:37). Watchfulness starts with exterior silence that leads, after a great struggle, to interior silence. But because nature abhors a vacuum (Matthew 12:43–45), our silence must fix itself upon Jesus Christ and be nourished by the Orthodox Church.

Without this God-filled silence, the lives of twenty-first century Christians will be indistinguishable from those of non-Christians. Without this watchfulness we risk wasting our lives and destroying our humanity. 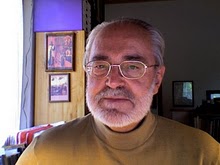 To be a Christian in the 21st century is, as it always was the case for Christians during the past centuries, to be physically present to the world, and to start living in the spiritual dimension of eternity. Respectful of human laws, it implies that we also abide by God’s commandments, and that we try and demonstrate to our neighbours that we are indeed disciples of the One Who, although He lived in the world of His times, was always relating to the higher dimension of the Kingdom. We do have to be living icons, manifesting as best as we can, that Christ is among us. It is a great responsibility, and we can but hope that with God’s grace, we will be able to achieve this high calling.