Mother Maria of Paris says “OXI!” to the Nazi… 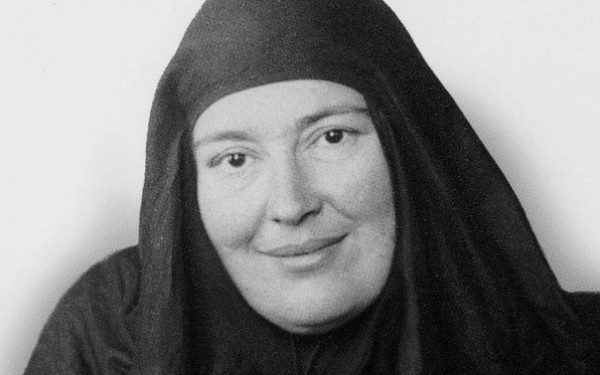 On the occasion of OXI Day, when we commemorate the occasion when a tiny, run down nation had the guts to stand up against the bullying of the Nazi/fascist juggernaut, I want to bring up another underdog who deserves some recognition.  No, she isn’t Greek, although she is Orthodox Christian.  She isn’t American either.  She probably never even stepped foot in Greece. But she is a heroine.  She displays the ideal of “philotimo” (or doing the honorable thing for the honorable thing’s sake).  She too had the courage to say “NO” to the Nazi murder machine.  For her sacrifices to her immigrant community and the poor and the stranger, and ultimately in her ultimate sacrifice of her life, she is recognized as a saint in the Russian Orthodox Church.  Her name is Maria Skobtsova  or more simply Mother Maria of Paris.

I can’t summarize her entire life story in one short article as this would not do justice to the complexities of her thought and her being.  (But you can get a more detailed account by reading Jim Forest’s bio of her at http://incommunion.org/2004/10/18/saint-of-the-open-door/).  Suffice it to say that she was a character; she, like Dorothy Day, her Catholic counterpart, believed that Christ took the guise of the poor, the wretched, the ill, and that instead of glorious towering temples,the Church could be found “in the streets.”

Here are some life notes:

But what would garner her a golden medal on OXI Day deals with her bravery in smuggling out Jewish children headed for the death camps in an undercover operation aptly titled “The Trash Can Rescue” (the story is described vividly in the children’s book Silent as Stone: Mother Maria of Paris and the Trash Can Rescue, also by her biographer Jim Forest and founder of the Orthodox Peace Fellowship.  You can purchase your own copy on Amazon).

The story occurs after Mother Maria had established the house with the blessing and help of her bishop, Metropolitan Evlogy Georgievsky, on rue de Lourmel.  Word got out that something was happening at the stadium, not far from the house. “. . .There was a mass arrest of Jews — 12,884, of whom 6,900 (two-thirds of them children) were brought to the Velodrome d’Hiver  . . . Held there for five days, the captives in the stadium received water only from a single hydrant, while ten latrines were supposed to serve them all. From there the captives were to be sent via Drancy to Auschwitz. (http://incommunion.org/2004/10/18/saint-of-the-open-door/)

Because Mother Maria was well-known to the police and sanitation crews as she would scour the back alleys of Paris and the central market gathering day old food and recyclables for the poor of her community, she was granted access into the stadium.  She quickly sized up the situation.  The stadium had become a central transfer and processing hub for the thousands of Jews of Paris.

She prayed for assistance.  The idea came to her.  By employing the confidence of the local sanitation workers in charge of hauling the garbage from the stadium, Mother Maria perpetrated a plot that would at least save the children from the gas chambers: stuff them into the garbage bins, haul them out on the trucks from the stadium, and then under the cover of night, sneak the children to the house on rue de Lourmel where she then could orchestrate their continued passage to the south of France, an area outside of Nazi control, and to safety.

As her biographer recounts, “It would have been possible for her to leave Paris when the Germans were advancing toward the city, or even to leave the country to go to America. Her decision was not to budge. “If the Germans take Paris, I shall stay here with my old women. Where else could I send them?” (http://incommunion.org/2004/10/18/saint-of-the-open-door/)

No one is sure how many children Mother Maria and her garbage crew saved.  But what is certain is that she eventually was found out by the Nazis.  The priest, Father Dimitri Klepinin who had served alongside her in the “monasticism in the world” and her son Yuri were arrested.  They had been guilty of forging fake baptismal certificates for Jews who came begging for help.  Yuri and Father Dimitri eventually died in Buchenwald camp while Mother Maria was sent to Ravensbruck.

Even while undergoing unspeakable torment, Mother Maria still saw hope in the smoke stacks that plumed from the crematoria.  “But it is only here, immediately above the chimneys, that the billows of smoke are oppressive,” Mother Maria said. “When they rise higher, they turn into light clouds before being dispersed in limitless space. In the same way, our souls, once they have torn themselves away from this sinful earth, move by means of an effortless unearthly flight into eternity, where there is life full of joy.”  Even in the camp, she would give away her own meager portion of bread to others more needy.

She too found escape through the smoke stacks of the gas chambers.  It was Good Friday, March 30th, on the eve of the liberation of Paris, 1945, that Mother Maria was one of those chosen for death. According to other accounts, she took the place of another prisoner who was marked for the gas chamber that day.

This little-known wayward nun who downed vodka and scribbled poetry had the courage to risk her life to do the Christ-like thing.  (When Nazis interrogated her about whether she had seen any Jews, she would point to an icon of the Mother of God or else point to the body of Christ on her crucifix.) To stand up against injustice and hatred, not just in the abstract as she had criticized the early revolutionaries and even the ultra-nationalistic Church leaders, but in the real, the here-and-now. In the shiny-black-boots-ringing-at-the-doorbell-come-to-take-you-away real type of terror and injustice.  The monster of barbarism that has mass appeal and seems unstoppable.  It is in front of this monster that a tiny woman dressed in black stood up and said “NO!”  No, that is not right.  And it didn’t matter that those she risked her life for weren’t Russian or Greek or even Orthodox, she did it because it was the right thing to do.  It was what Christ would have done.  The same way the pathetic, no shoes, no power Greeks did to Hitler and Mussoulini.  All they did was stand up and say “NO!”  It takes courage to stand up and say “No!” when you are deemed puny and powerless. But it is that act that makes you powerful and makes all the difference; it is small acts of kindness and truth that echo down the annals of history and the alleys of Paris.

For more resources on Mother Maria, check out:

Silent as a Stone: Mother Maria and the Trash Can Rescue, by Jim Forest, illustrated by Dasha Pancheshnaya