What If All Is In Vain?

“Is your name Zoya?” asked Natalya. “Yes.” “They are looking for you, you need to go, somebody has betrayed you…” Zoya looked at Natalya (they were of the same age) and said, “Where am I to go? The small ones can’t walk a long distance, and we’ll be recognized.” And then from being just a neighbor Natalya became what the Gospel calls one’s ‘neighbor’. She said, “Zoya, nobody will be after you, as I’ll stay here instead.” “But you’ll be executed!” said Zoya. “This doesn’t matter, I don’t have kids like you…” So Zoya left, and Natalya stayed.
Metropolitan Anthony of Sourozh | 15 December 2008 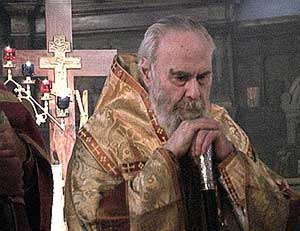 I want to tell you about one woman who, in ordinary people’s judgment, perished in vain. For a believing and understanding heart, however, this woman gained a victory of eternal life for herself and others. The woman’s name was Natalya and she was less than thirty at the time. There was a war. A woman, Zoya by name, and her two little children Andrey and Tatyana were hiding in the outskirts of a certain town. She was being searched for. She was unwanted on earth. She was hiding in an empty hut, in order to avoid death and save her children. In the evening somebody knocked on the door. In fear, she opened the door and saw Natalya, whom she had never met before. “Is your name Zoya?” asked Natalya. “Yes.” “They are looking for you, you need to go, somebody has betrayed you…” Zoya looked at Natalya (they were of the same age) and said, “Where am I to go? The small ones can’t walk a long distance, and we’ll be recognized.” And then from being just a neighbor Natalya became what the Gospel calls one’s ‘neighbor’. She said, “Zoya, nobody will be after you, as I’ll stay here instead.” “But you’ll be executed!” said Zoya. “This doesn’t matter, I don’t have kids like you…” So Zoya left, and Natalya stayed.

We cannot imagine what was happening that night. We cannot make up what people feel and how they struggle before their death. But we can look into the Gospel and ask ourselves about what was happening in Natalya’s heart while she, in Christ’s image, was laying down her life for somebody else, sacrificing herself so that other people could be saved.

Do you remember the garden of Gethsemane? It was a night, a dark and cold night. Christ was alone in that night. His death, seemingly unnecessary, was coming. It was not His death, if we may say so, as He was dying our death. For there was nothing in Him worth dying or that might compel Him to die. He had no sin, He had no unrighteousness, and the dark world had nothing of its own in Him. He was waiting for our death, in order to pull us out of eternal death. Oh, we do continue to die on earth, but it is no longer the same death! Before Christ death meant the breaking of the connection with God, the feeble connection of faith, the connection with the cries of one’s soul, the connection of longing. Before Christ both the righteous and the sinful went away from God’s face. That death has not existed anymore ever since Christ died and was risen. He shared with us all the depth of people’s being forsaken by God, as he gave that terrifying cry, “My God, my God, why hast thou forsaken me?” He descended to hell, much like any dying person, gave Himself up for captivity, but tore apart this hell, bringing eternal life into the sphere of finite death…

Christ was dying, waiting for death for the sake of others. Natalya, too, was waiting in the thickening darkness for death to come, not her death, but Zoya’s. Christ was fighting the death horror, “Let this cup pass from me.” Do you really think that the thirty-year-old girl Natalya was not crying before God? Christ was looking for human help, a glance, a touch of a hand. It was three times that He came up to the three disciples who He had chosen, who He asked, “Watch with Me,” and it was three times that He found them sleeping. Nobody gave Him a hand, nobody said a word to Him, nobody looked at Him with human eyes. Natalya, too, must have really wanted somebody to tell her, “Don’t be afraid, Natasha! There is eternal life after death. Don’t be afraid, Natasha, I’m with you!” But the darkness was silent, and nobody told her that.

It was a similar night when Peter, the most devoted of the disciples, went after Christ, when He was taken to the unjust court. Together with John they went as far as the high priest’s palace. They were let in not as Christ’s disciples. The Gospel uses a terrifying word, they were let in because John was known there. They were welcomed, while Christ, their Master and God, was being dragged there to be condemned to death, to be spat on, beaten, humiliated, slandered and given away for crucifixion. They entered and there was no danger for them. However, hardly had a young maid and some men warming themselves at the fire said, “We recognize you, you were in the garden of Gethsemane, too. You are a Galilean, your speech betrays you,” when Peter denied Christ three times. He said, “I do not know this Man! I’m not with Him, I’m with you…” Peter did not actually say, “I’m with you,” but is it really possible to say, “I’m not with Him,” and not to join the other party? Peter left, and he was scared… And Christ looked back through the open window from where He was being judged, and beaten, and spat on. He looked at Peter, and Peter wept bitterly. But Peter came out, he was free, he was no longer where death was breathing… Natalya could have opened the door and gone outside. And if the door had been opened and she had left, at that very moment she would have become Natalya, not Zoya, again. Death would not have been threatening her anymore… But she did not leave. A fragile girl, she turned out to be stronger than Peter.

Remember one more person, the strongest and greatest man of all born on earth, John the Baptist, Christ’s friend. He was in prison, in death horror. He was waiting for death to come, when suddenly his soul, the strongest of all that had ever lived on earth, started to doubt. He sent his disciples to ask Jesus, “Are You the one we had been waiting for, or should we wait for another?” A seemingly simple question, but it means the following, “If You are the one we had been waiting as the Savior of the world, it was worthwhile that I wasted my youth in the desert, came back, was hated by everybody and a stranger to everybody, and that now I’m waiting for my death” (as he himself said, “I must decrease, so that Christ would increase in full”). But if this Jesus whom he had baptized in Jordan is not the one, not the real Savior, then everything turns into madness, into the nightmare of senselessness. Then the young years are indeed wasted, he should not have been a stranger among people, a lonely outcast, what is he to die for now, having been fooled by his dream and God… Jesus did not give him a direct answer. To a prophet, He gave a prophetic answer, “Go and tell John what you see, the blind receive their sight, the lame walk, and to the poor the gospel is preached, blessed is he who shall not be offended in Me…” And John died.

In the thickening darkness and piercing cold, Natalya, too, must have been thinking while waiting for her death, “What if it’s all in vain? What if I die, but Zoya will be captured and her children will be killed anyway?” And nobody answered her anything. “Have faith only, Natasha,” her soul was saying, “have faith only and die.” And in the morning she died…

And if that was it, that would only be a story about a great Russian soul that was able to come to love and become as perfect as Christ. But it was not the end. I know Zoya, she is an old woman, Andrey is the same age I am, Tanya is younger. Once one of them was telling me about Natalya and said, “You know, her death wasn’t in vain. It is for many years that we have been living with only one thought in mind, that she died our death. And we must live her life, how she would have lived it on earth, as perfectly as Christ did.” Do you remember the apostle’s words, “Nevertheless I live; yet not I, but Christ liveth in me!” This is in the full measure of Christ. She seemed to die on earth, but she is living three lives in the three people’s memory and spirit, as their strength and inspiration. They are trying to live their lives so that her death would be a living seed in the soil, not the death of what God hoped for.

So when it is dark around you, when you are scared, when you seem to be absolutely exhausted, when you think that our human, ecclesiastical and Christian fragility will not stand anymore, remember Natalya. She defeated hell’s forces with her fragility, defeated human infirmity, became perfect like Christ. She gave a new life, I believe, an eternal one, to the three people, and not only to them, but perhaps, to you as well, if my words have reached your soul. She gave it to me, as I could not help crying while listening to this story, and she also gave it to many, many others. And now she, a fragile girl, is praying to God with an immensely powerful prayer. Oh, God, let us accept this seed of life, cultivate it and yield fruit.