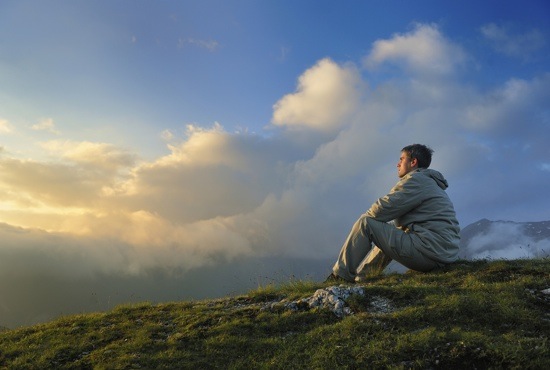 The story of Jesus in the Gospels includes many references to His calling fishermen as disciples, preaching and teaching by the seashore, crossing the sea and calming its winds and waves. This body of water of course is not actually a sea but rather a large lake, measuring roughly twelve miles long and eight miles wide at its widest and longest points. On the east side of the lake is Syria and Jordan. On the west side Palestine and Israel. The lake is named by various names according to ancient local districts and towns: Lake of Gennesaret, Sea of Galilee, Sea of Tiberias.

In the days of Jesus, because of ample fishing, the lake supported numerous towns on its western shore. It was there, near the town of Capernaum, that Jesus called His earliest four disciples, two sets of brothers: Peter and Andrew, John and James (Mat. 4:18-23). He issued a “call” (κλήσις or κάλεσμα) to them: “Follow me!” And they left their nets and followed Him. Ordinary people in ordinary circumstances. But in answering that call they became extraordinary people: co-workers of Christ and inspired preachers of the gospel of salvation.

The Gospels report several “calls” of the earliest disciples, with some differences in details and names (Mat. 4:18-22; Mark 1:16-20; Luke 5:1-11; John 1:35-51). It may be that the disciples had to grow in their understanding and commitment to Christ. Also, the Gospel authors worked from memory and received traditions told and retold over the years. And they indicate a great deal of freedom in recording their own version of the events of the life of Christ.

Why did Jesus call disciples? Because He had a mission to accomplish and could not do that alone. He called certain people He chose, eventually twelve of them, as symbolic of the twelve tribes of Israel to signify the new era of fulfillment and restoration of God’s people. He called them to train them, and to have them share in His mission. Later they called others to do the same and these others summoned new people to continue the work. The process of mission and pastoral care continues in the life of the Church and calls all of us to participate in God’s work in the world for the salvation of souls.

What an extraordinary life the apostles had as the Lord’s conscripts! Peter the “Rock” (Πέτρος/Πέτρα) became the leader of the early Church in Jerusalem, then he became a major missionary leader and later the patron of the Church of Rome. Andrew also became known as a missionary leader and the patron of the Church of Constantinople according to tradition. John, the Beloved Disciple, was a leader in the Church of Ephesus and his legacy includes the Gospel of John which is the most profound book of the entire Bible. All the apostles, whether they gained pre-eminence or not, served as faithful bearers of Chris’s new era, His new outlook, His new way of life.

Christ has continued His saving work throughout history, calling people from all walks of life to be His helpers. St. Efrosynos was a cook. St. Demetrios was a teacher. St. Silouan was a farmer and later a monastic. St. Lydia was a business woman. St. Priscilla was a housewife and a missionary. St. Pelagia was a hermit. St. Helen was an empress. All had their own personalities, talents, peculiarities, limitations. They lived in different places and various circumstances. But all became co-workers of Christ by their faithful response to His call to live and work as the light and salt of the earth.

Some people have real struggles about their own calling in life. They stress over what to choose and what to do according to their make-up, their opportunities, and the available choices regarding a job or a profession. I faced the same problem and sought an answer from a saintly bishop during my early years of seminary. How could I know with reasonable assurance whether to continue my priestly studies, or to change course and pursue another profession? I was troubled, anxious, and eager to receive advice.

The advice was indeed sound but not what I expected. After welcoming me and listening carefully, the bishop jolted me with the words: “My child, do whatever you think is right, whatever you like, whatever comes your way in God’s providence. You have personal freedom, but whatever you chose, do it well as a Christian in the service of Christ!”

“Do it well as a Christian in the service of Christ!” I was in shock and crestfallen for days but eventually realized my immaturity and the truth of the bishop’s counsel. I was caught up in self-regard and self-centeredness. The bishop challenged my outlook to work out a new vision of myself and my future. Doing well whatever one chooses and doing it in the service of Christ is far more significant in the eyes of God than any of many choices about job or occupation that may be available to us. Every job can become a “calling” from God when our whole life is open to God, in accord and in tune with God’s will, which is the first priority.

How so? Every job, every task, every occupation has God’s hand in it when we live by steadfast faith, good will, goodness, fairness, honest work and the intent to serve others. When we speak of God’s will for our life, it’s more important to practice God’s commandments of love of God and of neighbor, and to have a deep life of faith in Christ, than to figure out exactly what our unique task in the world might be. Every person, woman or man, young or old, rich or poor, educated or not, can turn his or her choice of work into a “calling,” a “vocation” from God, a vehicle of grace and blessing to others and to ourselves.

The Church Fathers teach us how to understand and live our lives as co-workers of Christ at all times and in all circumstances. Created in the image and likeness of God, all of us are gifted with the proclivity (κλισις) to seek out and have communion with God. All of us also have the “call” (κλησις) from Christ through the gospel, the good news of salvation. And all of us have the seal of the gift of the Holy Spirit through baptism, guiding and energizing the life of faith. What is absolutely needed is our own response to the call of Christ to be His co-workers and followers, not only by listening and learning but also by doing and living His ways and teachings. Everyone can grow in Christlikeness, and that is the best way to be His co-workers in the world.

Christ needs priests, parish council and philoptochos members, Church school teachers, and many other helpers in His holy Church. He also needs fathers and mothers, brothers and sisters, relatives and friends, to foster Christian homes and Christian networks. Christ needs factory workers and engineers, doctors and carpenters, sales persons and journalists, and all others in any honorable job or profession, to be alert and devoted agents of grace and goodness in the service of Christ.

The most valuable gift we can bring to our respective occupations is our own personal faith in Christ, our own spiritual focus in the arena of life, our own growth in the love for God and neighbor. In today’s Epistle reading St. Paul writes: “Glory and honor and peace for everyone who does good, the Jew first and also the Greek. For God shows no partiality” (Rom 2:20-11). And elsewhere he writes: “Be watchful, stand firm in your faith, be courageous, be strong. Let all that you do be done in love.” (1 Cor 16:13) Amen.