This contemporary reality should be an encouragement to Orthodox Christians on two levels. Firstly, while most Canadians are choosing Christian names for their children, many have no idea about the origins of their name, the story of their saint, and the identity which comes with the chosen name. This presents an opportunity - a missionary opportunity.
Archpriest Geoffrey Korz | 11 June 2010 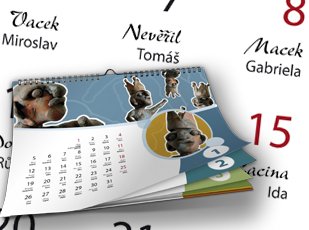 “He has made from one blood every nation of men to dwell on all the face of the earth, and has determined their preappointed times and the boundaries of their dwellings, so that they should seek the Lord, in the hope that they might grope for Him and find Him, though he is not far from each one of us;” – Acts 17:26-27

A few weeks before my ordination to the priesthood, a beloved, senior priest friend approached me to offer his best wishes.

“Father Deacon, what will your new name be?” he asked with a smile. I explained that I would keep the same name, as most priests do, since it was an Orthodox saint’s name. Somewhat confused – no doubt on account of the unfamiliarity of the history of the name – he asked again.

“But what will your Orthodox name be?”, he queried.

“The same name,” I replied, trying to explain myself. “It’s an Orthodox name, you know.”

Chuckling, somewhat unconvinced, he jumped to his real question.

“Yes, yes. But what will your Greek name be?”

Such charming moments underscore how much we have lost in our country, where the memory of the names of saints has been so far reduced, to a point where only the most familiar ones (and often, the ones most foreign to many Canadian ears) are remembered. It is another unfortunate reminder that for many Canadians, both Orthodox and heterodox, that the Orthodox faith remains something from long ago, and far away.

Names provide the essence of our identity. From the earliest times, those who sought the Lord were often given new names to seal their covenant with God. Abram became Abraham, and his wife Sarai became Sarah. Jacob came to be known as Israel, and the Church today – the new Israel – still bears his name. Numerous other examples could be given.

With the coming of Christ in the flesh, the practice of changing names – in particular, the practice of God giving a new name to those who covert – continued. The fisherman Simon became the Apostle Peter. The persecutor Saul became the Apostle and Evangelist Paul. In many places, the early Church continued this practice at baptism, as the newly illumined infant or adult took on a new name, a new identity, and a new patron to intercede on his behalf before the throne of Christ[1].

Recently, some in the media remarked on a national survey of Canadians and Americans, which demonstrated our country’s notable secularization. Almost half of Canadians surveyed (42%) indicated that they almost never attend a religious service, contrasting with a similar figure (46%) of Americans who indicate they attend church on a weekly basis[2]. Yet for all our secularization, Canadians continue to demonstrate a dogged attachment to Christian names for their children. Whether this attachment is indicative of an awareness of our inherited identity, or whether it is merely nostalgia for simpler times, our names provide an indication that the Canadian connection with the saints is not entirely severed, even among secular people. For the faithful, this is a place to begin.

Consider the following examples. In 2003, of the twenty top names for boys and girls in English Canada, half were recognizable Christian given names. For boys, these included Justin, Joshua, Matthew, Jacob, and Nicholas; for girls, these included Emma and Emily (the mother of Saint Basil and his siblings), Sarah, Hannah, and Madison. The last example, Madison, provides one of the many cases where a diminutive of a Christian name has become so common, that it has lost its Christian connection in the popular mind. In the case of Madison – originally a boy’s name, the “son” of Maud/Matilda or Matthew in Old High German – all its roots are Christian, despite popular amnesia about its origins.

Alberta (sometimes known as Canada’s “Bible belt”) boasts an even wider usage of Christian names for children in the 2007 list. In addition to those mentioned above, other familiar biblical and saints names abound – including Jacob, Noah, Alexander, Ethan, Nathan, and Owen (from the Old English Eugenius, meaning “well born”), as well as Liam (a diminutive Irish version of William or Basil, with a Hebrew root).

The same is the case for girls names. Albertans fill out their baby names top-ten with Sarah, Sophia, and Ava (a Latin version of Eve, used as a dedication to the New Eve, the Mother of God).

Even in the militantly secular and celebrity-worshipping culture of Quebec, Christian names top the list. For 2007, the boy names list reads like an Orthodox calendar of saints, for those who recognize the roots. In order, they are (for boys) William (Basil), Samuel, Gabriel (the Archangel), Nathan, Alexis, Thomas, Felix (of East Anglia), Antoine (Anthony), and Justin. Only one name in the top ten – Oliver – comes from a non-Christian root. For girls, the case is similar, with Lйa (Leah), Juliette (a version of Julia), Gabrielle (feminine of Gabriel), Sarah, and Noйmie (Naomi) dominating the top ten list of given names.

This contemporary reality should be an encouragement to Orthodox Christians on two levels. Firstly, while most Canadians are choosing Christian names for their children, many have no idea about the origins of their name, the story of their saint, and the identity which comes with the chosen name. This presents an opportunity – a missionary opportunity, if you will – for faithful Christian witness to those who, far from having no Christian connection, merely find themselves cut off from a Christian inheritance that is their own, from their own ancestry and cultural heritage. (In many if not most cases, this heritage is Orthodox at some time in its past, even if it is one thousand years ago).

Secondly, in order to be true witnesses of the lives of Christ’s saints to those who bear their names, the faithful must take the time to prepare themselves each day with the reading of lives of the saints, the collection of their icons from the holy ones of the East and West, and the intimate familiarization of their holy witness. The lives of certain popular saints are more easily learned (Saints Nicholas and Catherine being classic examples which cut across cultures). Yet the names of thousands of Orthodox saints, particularly those of the Orthodox West, have until recently been almost lost in the sands of time[3]. These are often the very names which are familiar given names for Canadians, young and old.

The capacity to give this gift takes time to develop, yet it is not and cannot be a dry academic exercise. Rather, our familiarity with the saints must be part of the daily pattern of our lives. It means using the Church calendar to give context to our day. It means including under the date in our personal letters the name of the feast of the day. It means reading the lives of saints, and searching out their icons in churches, shops, and in online collections. It means discovering children’s books with the lives of saints, to give as gifts to adults and children alike. It even means finding an icon for the name saint of our friend, co-worker, or the neighbourhood child’s birthday, and using our colour printer to print off a holy image, alongside all the snapshots from our vacations.

It is popular today to speak of the need to build bridges for unchurched people to find their way to – or their way back to – the Church. Too often, such good intentions can lead to the creation of false bridges, inspired more by the imperial popular culture and the entertainment industry than the gift of the Orthodox tradition. Yet in making the connection between the names that we bear and the saints who bear them as well – their lives, their writings, their histories, and their icons – Orthodox Christian faithful have the opportunity to build true bridges to the inheritance not just of the Church, but to the links most Canadians have with the Orthodox Church from their own family heritage.

In a time obsessed with individualism, there is perhaps no better gift that faithful people can give than to fill this mark of individual identity – our given names – with the knowledge of Christ and His martyrs and saints. It is something we can and must do.

[1] Even the common Orthodox practice of the Jesus Prayer is rooted in the use of the Personal Name of Jesus Christ.

[3] The Church in Russia recently added hundreds of Western Orthodox saints to the calendar of the Church in Russia. This praiseworthy step was the result of the early labours of Saint John Maximovitch, who urged the Russian Synod to recognize the pre-Schism saints of the West. In recent years, the labours of Father Andrew Phillips to make known these saints must also be noted.