This is the time of year when a lot of people start talking about Halloween (or Hallowe’en, if you prefer), but what they say or think about it depends very much on their cultural background and theological background. 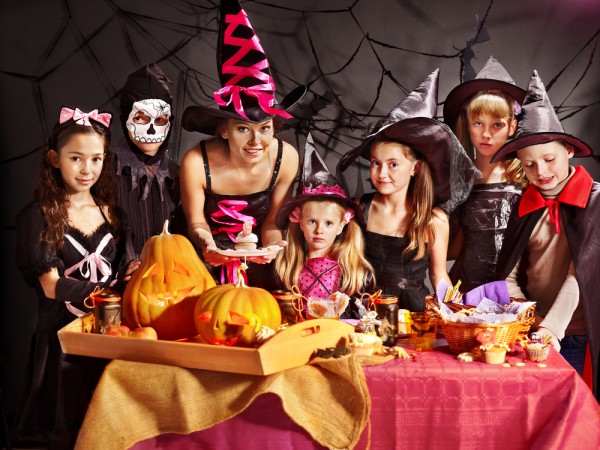 It’s a big American cultural festival, and so a lot of talk on it goes on in the USA, where children dress up. To a lesser extent it’s celebrated in the British Isles. Here in South Africa it is almost unknown, though adults occasionally use it as an excuse for having fancy-dress balls, and the TV stations seem to increase the number of “horror” movies that they show. These “horror” movies rarely have anything to do with supernatural horrors, however; they are more usually “slasher” movies. so that the season of All Saints is commemorated by showing all sinners.

The word “Halloween” is short for “All Hallows Eve”, or the “Eve of All Saints Day”, as celebrated by Roman Catholics and Anglicans. Protestant groups regard it with some suspicion, not holding with cults of saints and the like, and some claim that it is “pagan” or even “demonic”.

All this is a bit remote from me. Halloween isn’t big in South Africa. And I’m an Orthodox Christian, and our Halloween is the Saturday after Pentecost, so the 31st October isn’t of much interest, as it’s a purely Western phenomenon.

Neopagans (or some of them) claim it as theirs, and celebrate it as Samhain (pronounced sow-in, I’m told), and say it is of Irish origin, but some of the Irish disagree about that.

So what can I say about it? Why not just give the synchroblog a miss this month, and leave it to those to whom Halloween means something?

But I read a very interesting book about it – The stations of the Sun by Ronald Hutton (Oxford University Press, Oxford, 1996). So perhaps I may find something interesting there. Hutton is a British historian, and his book is a very well-researched study of seasonal festivals in Britain. Some of his observations may be of interest to those who get their knickers in a knot over Halloween — either pagans who think Christians “stole” it, or Christians who think it must be “demonic”.

At the end of the nineteenth century, two distinguished academics, one at Oxford and the other at Cambridge, made enduring contributions to the popular conception of Samhain. The former was the philologist Sir John Rhys, who suggested that it had been the ‘Celtic’ New Year… Rhys’s theory was further popularized by the Cambridge scholar, Sir James Frazer. At times the latter did admit that the evidence for it was inconclusive, but at others he threw this caution overboard and employed it to support an idea of his own: that Samhain had been the pagan Celtic feast of the dead. He reached this belief by the simple process of arguing back from a fact, that 1 and 2 November had been dedicated to that purpose by the medieval Christian Church, from which it could be surmised that this was been a Christianization of a pre-existing festival. He admitted, by implication, that there was in fact no actual record of such a festival, but inferred the former existence of one from a number of different propositions: that the Church had taken over other pagan holy days, that ‘many’ cultures have annual ceremonies to honour their dead, ‘commonly’ at the opening of the year, and that (of course) 1 November had been the Celtic New Year. He pointed out that although the feast of All Saints or All Hallows had been formally instituted across most of north-west Europe by the Emperor Louis the Pius in 835, on the prompting of Pope Gregory IV, it had already existed, on its later date of 1 November, in England at the time of Bede. He suggested that the pope and emperor had, therefore, merely ratified an existing religious practice based upon that of the ancient Celts.The story is, in fact, more complicated. By the mid-fourth century Christians in the Mediterranean world were keeping a feast in honour of all those who had been martyred under the pagan emperors; it is mentioned in the Carmina Nisibena of St Ephraem, who died in about 373, as being held on 13 May. During the fifth century divergent practices sprang up, the Syrian churches holding the festival in Easter Week, and those of the Greek world preferring the Sunday after Pentecost. That of Rome, however, preferred to keep the May date, and Pope Boniface IV formally endorsed it in the year 609. By 800 churches in England and Germany, which were in touch with each other, were celebrating a festival dedicated to all saints upon 1 November instead. The oldest text of Bede’s Martyrology, from the eighth century, does not include it, but the recensions at the end of the century do. Charlemagne’s favourite churchman Alcuin was keeping it by then, as were also his friend Arno, bishop of Salzburg, and a church in Bavaria. Pope Gregory, therefore, was endorsing and adopting a practice which had begun in northern Europe. It had not, however, started in Ireland, where the Felire of Oengus and the Martyrology of Tallaght prove that the early medieval churches celebrated the feast of All Saints upon 20 April. This makes nonsense of Frazer’s notion that the November date was chosen because of ‘Celtic’ influence: rather, both ‘Celtic’ Europe and Rome followed a Germanic idea….

For what it’s worth, the Oxford Dictionary of the Christian Church notes that Pope Gregory III of Rome (d. 741) dedicated a chapel in the basilica of St Peter to “All the saints”, and Gregory IV ordered its universal observance. Sixtus IV (d. 1484) added an Octave, which was suppressed in 1955.

The idea that Christians “stole” it from pagans, therefore, seems pretty far-fetched. In fact the evidence seems to point the other way: the neopagans seem to have unintentionally “stolen” it from the Christians, as a result of a rather wild guess by Sir James Frazer.

What about the accusation by some that it (or at least the dressing up part of it) is “satanic”, “demonic”, or “evil”?

Well, I’ve never seen “trick or treat” in action, but from reading descriptions of it, and seeing films about it, the idea of kids going around saying “give us sweets or we’ll do something nasty to you” sounds a bit like a juvenile protection racket to me, and that is potentially, if not actually, evil. It’s only one step from that to going round to shop keepers with a gun and saying “give us X, and we’ll protect you from Y”.

Now I’ve been told by many Americans that it is not like that at all, and that it is all harmless fun, so I must have been misled by the films and the books I’ve read. But the idea still makes me a bit uneasy. I’m glad there was no tradition of that sort here when my kids were growing up. And I suspect that if they’d tried it in our neighbourhood the neighbours would have been astounded at the cheek of it, and probably offended when they had second thoughts. But that’s just our culture.

As I pointed out, for Orthodox Christians All Saints Day (All Hallows, or Hallowmas) is the Sunday after Pentecost, and this year it was celebrated on 3 June. The Vigil of the Feast (Halloween, All Hallows Eve) was Saturday 2 June. And here’s what is said about it:

The Sunday following Pentecost is dedicated to All Saints, both those who are known to us, and those who are known only to God. There have been saints at all times, and they have come from every corner of the earth. They were Apostles, Martyrs, Prophets, Hierarchs, Monastics, and Righteous, yet all were perfected by the same Holy Spirit. The Descent of the Holy Spirit makes it possible for us to rise above our fallen state and to attain sainthood, thereby fulfilling God’s directive to “be holy, for I am holy” (Lev. 11:44, 1 Peter 1:16, etc.). Therefore, it is fitting to commemorate All Saints on the first Sunday after Pentecost.This feast may have originated at an early date, perhaps as a celebration of all martyrs, then it was broadened to include all men and women who had borne witness to Christ by their virtuous lives, even if they did not shed their blood for Him.

So what can be said about Hallowe’en?

That Hallowe’en was, and still is, a Christian commemoration. It wasn’t chosen to coincide with any pagan or Celtic festival, and has in fact been observed by Christians at different times of the year and still is. If neopagans want to observe the period 31 October to 2 November as Samhain, that’s fine too. There are only a limited number of days in the year for festivals and commemorations, and there’s no obligation on any one group to choose one that has not already been chosen by someone else.

As for the secular customs that have grown up around the Western date for Halloween, haven’t had much experience of that, except for the “slasher” movies. I quite enjoy real horror movies (if well done), but to me “slasher” movies don’t qualify as real horror. It has to be really spooky to be horror.

What should American Orthodox do about Hallowe’en?

This question was asked on an Orthodox forum, and a priest from New Zealand made this suggestion:

So what do you do when trick-or-treaters come to your door? Tell them you’re Orthodox and slam the door in their faces? Just don’t answer the door at all?

My suggestion, if you want to be really pro-active, is to set up a small “shrine” on your porch – a few icons and a sand box where candles can burn.When the kids come, make them welcome, ask them if they’d like to light a candle and say a small prayer. Give them an icon print along with the lollies.

The Theology of Christian Marriage

There was a saying that was common a few years back that illustrates this: “A woman without a…