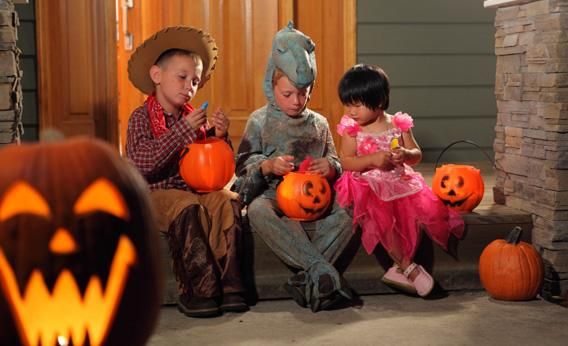 It is that time of year again when Orthodox and some other Christian writers attempt to warn people about the evils of Halloween. They assert—and I have done no less in my much younger days—that Halloween is a pagan holiday, and thus everyone who participates in its celebrations by default participates in the ancient Gaelic harvest festival called Samhain (“summer’s end”). As I grew older I saw that the people who dress up as princesses and Marvel super heroes have about as much to do with devil worship (for this is often the claim) as people who send each other Christmas cards or Easter candy have to do with worshiping Jesus Christ. This is all that I will say about it, and it may be a topic for another time. For myself, I still do not see any need to celebrate Halloween any more than I do the Chinese New Year, the Parinirvana Day, Eid-al-Adha, or Yom Kippur. But I am no longer interested in writing pseudo-pious articles linking my neighbors’ children to devil worshipers for merely dressing up in costumes any more than I am interested in condemning Russian Orthodox Christians for making (and partaking of!) pancakes on Maslenista, since pancakes are an ancient pagan symbol of the cult of the Sun (round, yellow, hot—reminds of anything?).

However, the grinches of Halloween (of whom I am chief) just might see the death of it after all. And no, it is not our fiery blog posts and inspirational sermons that are killing the evil practice of carving pumpkins and exchanging miniature candy bars. No, the butcher of Halloween is the modern phenomenon of super-sensitivity and hyper-offendedness. It is insensitive to dress up as a princess because this is a class misappropriation and may offend real princesses. Likewise, one should not dress up as a prince or a knight, unless the same is in fact a prince or a knight. No more Count Dracula costumes—they may be insensitive towards ethnic Transylvanians and persons bearing the noble title of count. Definitely, no Cowboys or Indians—for very obvious reasons. The Little Mermaid costume may offend persons with sirenomelia. A pirate costume is insensitive to people who have been victims of real pirates. (And it may also offend Somali-Americans due to the Western stereotyping of Somali pirates in the MSM.) Certainly, no more skeletons, zombies, or any other costume with reference to injury or death, because they may trigger traumatic experiences in some people. And no, no more children dressed as teddy bears, cats, or any other animal—speciesism and misappropriation! No more black capes. Period. They offend Orthodox clergy. Obviously, nothing sexy due to the abomination of objectification! No more nurses, nuns, witches, firemen, or clowns. I should not have to go on; the pious reader will understand the principle by which any costume is inappropriate unless worn by the very actual person it pretends to portray.

Halloween decorations are no less harmful in our culture. Heads carved out of pumpkins risk offending people who are sensitive to all of the recent beheadings committed by Islamic terrorists. Fake hanging corpses are unacceptable because they trigger the historical trauma of lynching. Spiders and spider webs are offensive to people with arachnophobia; and the fake RIP tombstones are insensitive to those who recently lost their loved ones. No more scarecrows in the yard, because they may scare people who are scared of scarecrows. There simply is not a single piece of Halloween decoration that is not insensitive or outright offensive to someone!

It is very possible that in our lifetime, the greeting “Happy Halloween!” will finally be replaced with the neutral “Happy holidays!” and everyone will walk around dressed strictly as themselves, exchanging carrot and celery sticks. (Candies are offensive to people without dental insurance and may be a conspiracy of the dental lobby.) Perhaps then, Orthodox bloggers will stop writing about the horrors of Halloween and focus instead on the memory of the Evangelist Luke or Saint Joseph of Volotsk, whose memory we celebrate on October 31 (those on the new calendar will have a pick of several of the Seventy Disciples.)