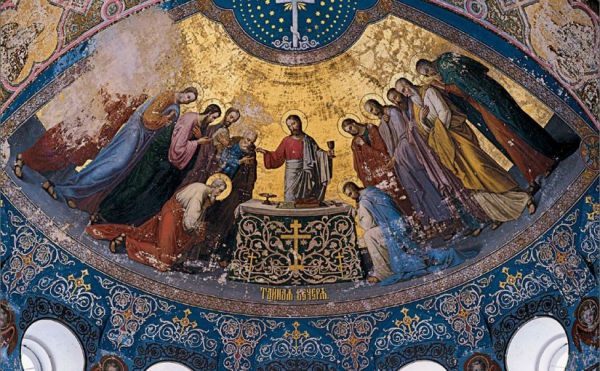 It doesn’t take long for someone who is curious about the ancient Orthodox faith to be either surprised or scandalized by the plethora of icons covering the inside of an Orthodox church.  The impression it leaves on the uninitiated may be one of reverence, confusion, or even anger at the supposed idolatry of the Orthodox people.

WHY DO WE HAVE ICONS?

The short answer to this question is because of the Incarnation.  If photographic technology existed at the time of Jesus, we would doubtless have thousands of photos of Jesus.  Because such technology did not exist, the ancients painted his image.  According to tradition, the Apostle Luke painted the first icons.

Icons are a testament of the fact that our God, who is by nature bodiless and incorporeal, took an actual human body and united it to himself, forever uniting the divine nature to human nature, to matter, sanctifying it and redeeming it in himself.  Therefore, the Orthodox have always understood iconoclasm to be a heresy that denies the Incarnation of God and thereby denies humanity its salvation in Christ.

In his physical body, our God lived, died, and resurrected for us.  He saves us and bestows upon us his sanctifying grace through means of matter.  Hints of this theology can be seen in the Gospels when Jesus’ clothes become light-bearing at the Transfiguration, when the woman with the issue of blood touches the fringe of his garment, etc.

In times past, God, without body and form, could in no way be represented.  But now, since God has appeared in flesh and lived among men, I can depict that which is visible of God.  I do not venerate the matter, but I venerate the Creator of matter, who became matter for me, who condescended to live in matter, and who, through matter, accomplished my salvation; and I do not cease to respect the matter through which my salvation is accomplished.

Our Lord’s disciples bestowed the grace of God upon others through matter when they laid their hands on others for healing or ordination, when they prayed over handkerchiefs and sent them to the sick, when their mere shadow “touched” people and healed them.  The culmination of it can be seen in the Eucharist (communion) when those who received the grace of God unworthily had Satan enter them (as with Judas in Luke 22:3) or became sick and died (1 Cor. 11:30).  Matter matters.

God has chosen matter to be his means of bringing grace and salvation into the world.  Icons testify of this theology.

DO WE WORSHIP ICONS?

In short, no, we Orthodox Christians do not worship icons, though some people, in ignorance, accuse us of idolatry.  This issue came to a head in the eighth and ninth centuries when, probably under the influence of Islam, some Christians began to destroy icons and persecute those who venerate them.  This heresy is called Iconoclasm.

So, if we do not worship icons, then why are we bowing before them and kissing them?

Christianity began in an eastern culture that was not a horizontal, but a vertical society.  There was no sense of egalitarianism in the ancient east.  Any decent person showed great respect to his elders in both society and the faith.  In Japan, we can still see remnants of their vertical society, which has not been completely Westernized.  Japanese people venerate and bow to their elders and superiors, not as a form of worship, but to show respect.  In the same way, Christians have always bowed to their superiors in the faith in order to show respect.  Even in the Old Testament, we see the Prophet Nathan prostrating himself before King David (1 Kings 1:23), not out of worship, but respect for the office given him by God.

Christianity also comes from a culture in which people greeted one another with a kiss.  The New Testament is full of references to that practice.  When the Orthodox greet their Lord Jesus Christ or one of his friends (the saints), we recognize that we are greeting a superior who is worthy of honor.  We therefore bow respectfully before the image of that person and greet them with a kiss.

The saints (members of the Church Triumphant) did not cease to exist when they died – as certain fringe groups teach.  Nor are they sitting about idly or uselessly.  They are interceding for us, members of the Church Militant, that we would finish the course with faith and love as they themselves did.  We greet these superiors of ours, asking for their prayers as we navigate the trials, temptations, and difficulties of our lives.  We hope to be united with them in Christ and enjoy the heavenly community one day.  See more on praying to saints here.

Additionally, because of the Incarnation, God’s grace is bestowed upon us through the icons of himself, his mother, and the saints.  There are many miracle-working icons in existence.  I had the privilege just recently of seeing the myrrh-streaming Iveron Icon of the Mother of God.

When we venerate an icon, we are really showing honor to God.  Our veneration passes through the matter and to the prototype whose image is depicted, and if it is a saint, the honor really passes to God himself because it is his grace that has vivified and sanctified that saint.  The material icon gives us physical creatures a means of showing veneration.

St. John of Damascus wrote, “We can only arrive at the spiritual through the material, for we are created twofold, possessing both soul and body.”  We are not souls trapped in matter, but a hybrid of both the spiritual and material worlds, therefore our salvation has to come through both faith and matter.

What about the Old Testament prohibitions for images?  Are we not breaking one of the Ten Commandments?  In short, no.  While prohibiting idolatry, God actually commanded all sorts of images be made for his temple/tabernacle.  The high priests would bow when approaching the holy of holies containing the Ark with the sculpted cherubim.  God himself is the original icon/image maker, for he made man in the image and likeness of God and has gifted humanity with creativity.

The Israelites lived in a culture that was extremely idolatrous.  Therefore, the prohibitions on them are exceedingly strict.  But it is not the same with us.  While we may “idolize” people or things that we’re passionate about, it is not the same as actually carving an idol and worshiping it as a god.  The old prohibitions are much like being strict with a young child who has not developed the maturity to handle more complex things or responsibilities.

The Incarnation has changed our perspective on matter.  God, who created matter and called it good, has taken it upon himself and united the divine with human nature.  We proclaim his Incarnation through iconography and recognize that faith in God is not a mind game, but an actual incarnational reality that we live when receiving his grace through matter (such as through the sacraments and through icons).  Glory to God who has chosen matter to be the means of his salvation of the world!

Quotes from St. John of Damascus come from “’Never as Gods’ – Icons and their Veneration” by Constantine Scouteris.

Further reading: St. John of Damascus – On the Holy Images