On Prayer X: Prayer Before Icons

One can see here the difference between Protestant and Orthodox prayer. In the Orthodox tradition, prayer is more concrete. Contemplating the icon of Christ, we look as if through a window opening up another world to us; behind this icon stands Him to Whom we are praying.
Metropolitan Hilarion (Alfeyev) | 31 May 2014 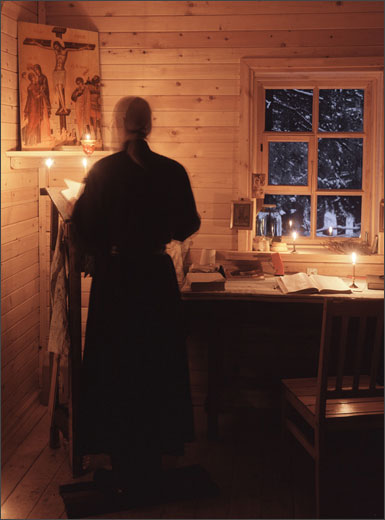 In prayer the outward should not replace the inward. The outward should contribute to the inward, but it can also hinder it. The traditional disposition of the body at prayer undoubtedly contributes to a prayerful state, but can in no way serve as a substitute for the main content of prayer.

One should not forget that certain dispositions of the body are not accessible to everyone. For example, many older people are simply incapable of making full prostrations. There are many people who cannot stand for long. I have heard from older people: “I do not go to services at church because I cannot stand,” or “I do not pray to God, because my legs hurt.” God does not need our legs, but our hearts. If you cannot pray standing up, then pray sitting down; if you cannot pray sitting down, then pray laying down. As one ascetic struggler put it: “better to sit thinking about God, than to stand thinking about your legs.”

Auxiliary means are important, but they should not take the place of content. One of the most important auxiliary means for prayer is the icon. Orthodox Christians, as a rule, pray before icons of the Savior, the Mother of God, saints, and before depictions of the Holy Cross. But Protestants pray without icons. One can see here the difference between Protestant and Orthodox prayer. In the Orthodox tradition, prayer is more concrete. Contemplating the icon of Christ, we look as if through a window opening up another world to us; behind this icon stands Him to Whom we are praying.

But it is very important that the icon not replace the object of prayer, so that we would not address ourselves in prayer to the icon or try to imagine the person depicted on the icon. The icon is only a reminder, only a kind of symbol of the reality that is behind it. As the Church Fathers say, “the honor rendered to the image returns to the prototype.” When we approach an icon of the Savior or the Mother of God and venerate it – that is, kiss it – we are thereby expressing our love for the Savior or the Mother of God.

Icons should not be turned into idols. Nor should there be the illusion that God is as He is depicted on icons. There exists, for example, an icon of the Holy Trinity called the “New Testament Trinity”: it is uncanonical – that is, it does not correspond to the rules of the Church – but one can see it in certain churches. On this icon God the Father is depicted as a grey-haired old man, Jesus Christ as a young man, and the Holy Spirit in the form of a dove. By no means should we be tempted to imagine that the Holy Trinity looks like this. The Holy Trinity is God, Who cannot be represented by the human imagination. And, turning to God the Holy Trinity in prayer, we should renounce every kind of fantasy. Our imagination should be free from images; the mind should be crystal clear; and the heart should be ready to accommodate the Living God.

Most viewed articles
Blasphemous and Obsessive Thoughts Come Into My Mind. What Do I Do?152
An Extraordinary Session of the ROCOR Synod of Bishops Convenes113
Funeral Services for His Eminence Metropolitan Hilarion of Eastern America and New York79
Is God a Fool?73
How to Respond to Opposition to the Gospel55
Metropolitan Joseph, Bishop Thomas Celebrate Centennial of Little Falls Parish55
PRAY: 14 Students, One Teacher Dead After Texas Elementary School Shooting41
A Piece of Rock Falls Down on the Skete of St. Anna on Mt. Athos40
His Beatitude Metropolitan Tikhon Issues Statement on Tragic School Shooting in Texas29
Most popular authors
Pravmir.com team232
Fr. Eugene Murzin152
Archpriest Stephen Freeman73
Subdn. Peter Samore55
Archpriest Basil Ross Aden55
Associated Press41
Metropolitan Tikhon of All America and Canada29