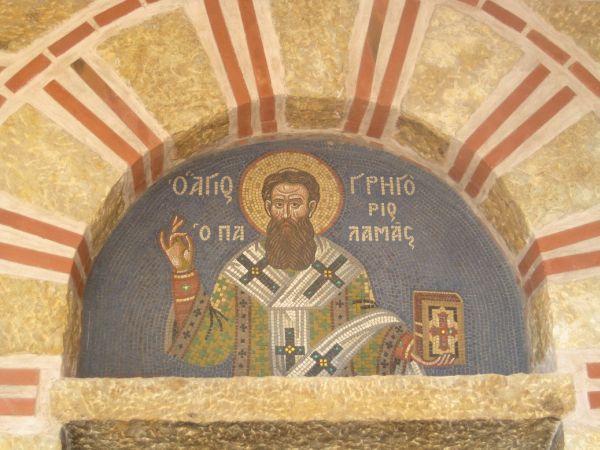 On the second Sunday of Great Lent the Church commemorates St. Gregory Palamas, archbishop of Thessalonica. This celebration is connected with the burning disputes of the XIV century about whether or not it was possible for man to have direct communion with God. There were theologians who said that this was not possible, that an insurmountable chasm existed between God and man which could not be surmounted by any ways or means. However, there were others who maintained that it was possible for man to have communion with God and His essence.

St. Gregory Palamas, who for many years was an Athonite monk and later became the archbishop of Thessalonica, based on the writings of the Holy Fathers, formulated the teaching that God is unseen and unknowable in His essence but could be seen and known in His actions, or energies. When this teaching triumphed at the Councils in Constantinople, the Church proclaimed that henceforth the memory of St. Gregory Palamas and these Councils would be celebrated on the second Sunday of Great Lent, as if to continue the celebration of the Triumph of Orthodoxy which is celebrated on the first Sunday of the Fast.

What is the significance of this teaching for us? We know from Church history, the history of monasticism and from the writings of the Holy Fathers, that there have been people in earthly life who reached the heights of the vision of God. They didn’t only know about God from books or simply feel the presence of God as a result of prayer or participation in the Divine services. The Heavens were opened to them and they were carried up by the Spirit of God, the same way that the apostle Paul was carried up to the third heaven, where they, like Paul, heard heavenly words that could not be spoken and which were impossible to repeat or retell to men in human language (2 Cor. 12:2-4). Again and again such people would appear who bore witness to this experience.

The Athonite monks, St. Gregory Palamas himself being among them, said the Jesus prayer for many centuries, which consisted of the unceasing repetition in the heart of the words: “Lord Jesus Christ, Son of God, have mercy on me, a sinner.” The Athonite ascetics taught that when this prayer is said with the mind, then the prayer mixes with extraneous thoughts, as often occurs with us when we pray with the efforts of our mind. These extraneous thoughts come from either the outside or from within us. It then becomes very difficult to concentrate, to be filled with the spirit of the prayer and to feel the presence of Christ. The Athonite monks taught that in order for the prayer to be said unhindered, the prayer of the mind must enter into the heart. Then, they said, extraneous thoughts will quiet down and it will be possible to concentrate on the “one thing needful” and most important in life — on the poignant feeling of the presence of God and on conversation with Christ which will not even be disturbed by the chores and concerns of daily life.

It is possible, when saying within oneself the Jesus prayer, for the heart and mind to be immersed in the presence of God to such an extent that one can remain in God’s presence without interference and still be able, at the same time, to perform the physical necessities of life in the world. This amazing technique of prayer which was cultivated by the monks of Mt. Athos became widespread in Byzantium, not only among monastics, but among the laity as well. Those who became proficient at it were able to accomplish, not figuratively but literally, the command of the apostle Paul to “Pray without ceasing” (1 Thess. 5:17). Without interfering in their daily activities, they without ceasing said the Jesus prayer in their hearts and abided in the presence of God. Some of these people, because they lived such a focused life, because they never forgot about God, were made worthy to receive special gifts and to behold the same Divine light which the disciples of our Savior saw when our Lord was transfigured on Mount Tabor.

St. Gregory Palamas said that the essence of God is inaccessible and that the human heart and mind is unable to understand or comprehend God. God will always be a mystery to man, but nonetheless, through His Divine energies and actions, He in many and various ways (Heb. 1:1) reveals Himself to man.

In coming to church and communing in her Mysteries, we commune of the grace of God, we commune of the actions and energies of God, which is what St. Gregory Palamas spoke about. He also said that God’s energies are inseparable from His essence, that in communing with the actions and energies of God we also commune with His essence, because the division between essence and energies is not in God Himself but in our mind. This is only one of the attempts to theologically explain the mysterious interaction between man and God, which is expressed in the fact that God is always outside our perception of the mind and intellect, always outside of our understanding, but at the same time he is always there within us, and through the Mysteries of the Church and through prayer we are able to spiritually and physically commune with God.

This is the Triumph of Orthodoxy that we are celebrating again today. Last Sunday we glorified God because He granted to our Church the sacred images, so that, looking at those who are depicted on the icons, we turned to them with prayer and received help from them — whether the saints, the Mother of God or our Lord Jesus Christ himself. Today, however, we glorify God for the fact that in His Mysteries and ineffable energies and actions He reveals Himself to each of us and because our life is filled with the Divine presence and outpourings of God’s grace, which transfigures our entire life, reveals to us the highest heights and allows us, while still living here on this earth, to be communicants of the Kingdom of God.

2.“The Ascetical and Theological Teaching of Gregory Palamas,” by Hieromonk (later Archbishop) Basil Krivoshein, an essay in Eastern Churches Quarterly, vol III, 1938, originally published in Russian in Prague in 1936.