Why It Is Impossible to Dialogue with a Christian Fundamentalist 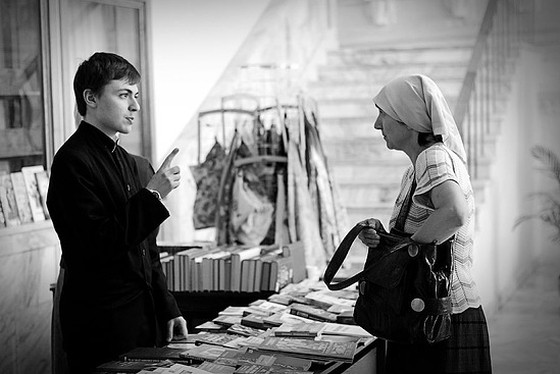 Lots of people have taken the labor to define Christian fundamentalism, so I will resist the urge to do so here. Instead, I will attempt to describe the fundamentalist personality in a way that will make it unmistakable for those who have personal experience with it.

You’ve met him. He’s that guy who starts a conversation about religion and winds up disowning everyone in the room who disagrees with him—those who don’t fall prostrate before each of his conclusions and private revelations.

You’ve likely been condemned to Hell by him for various things, and one need not be Catholic, a Democrat, or gay to feel the wrath. One need only use such phrases as “but what about,” or “have you ever considered,” in his presence. Claiming to only use the Bible for his judgment, he is mysteriously replete with condemnations for things that never made it into Holy Scripture: smoking, listening to secularmusic, dancing, having opinions, etc. Any of these might qualify as salvation-threatening apostasies.

Challenges to his opinions are met with tirades about the inerrancy of Scripture and a believer’s required loyalty to Sola Scriptura. He is the man of the moment, as evidenced by his constant claim that “God told me.” He is the chosen one, and must share his revelations with all who have “ears to hear” before the world bursts into a blazing inferno.

Sometimes this sort of fundamentalism is groomed. Maybe he grew up under parents or a pastor with a similar mindset. If so, it is likely a matter of time before he shakes these introjections loose. However, some of these suffer from nothing short of a mental illness. This type, which is something akin to narcissism, but with a twist of religious zealotry, moves dangerously close to the realm of a clinical disorder.

The average narcissist is, of course, ego-centric with a massive swale of insecurities hiding below the façade of grandiosity. The Christian fundamentalist has these traits but brings an obsessive-compulsive narrowness of interests, to the party as well. He is fixated on his latest revelation from God; he has found a scripture to match and has decided that the whole world needs to hear about it.

You get the picture.

He is not to be confused with the evangelical Christian. Though the fundamentalist often claims rank with the evangelical, he is in a class of his own. In fact, he is often so disturbed by the lack of revelation, faith, and Holy Spirit around him that he eventually grows tired of efforts to convert his pastor and fellow churchgoers and starts his own church instead. There is no way to map this statistically, but I would not be surprised if 90% of random, self-appointed, start-up ministers in America were of this personality type.

I want to give a possible theory as to why civil discussions with the Christian fundamentalist is difficult at best, and often impossible. There are likely many more factors at play, but I hope to tease out a couple of the more obvious ones.

One of the hallmarks of the Christian fundamentalist (and fundamentalism in general, regardless of the religious or secular forms it takes) is that he does not appreciate discussion of differing views. If you watch closely you will often notice a marked discomfort or irritation sweep over him very early in a religious discussion. There is a palpable resistance to opposing views, and one is wise to pick up on it early, particularly if one has regular dealings with this person (family, work, school, church) and wishes to maintain peace.

The question is: what animates this resistance to open discussion?

I believe the answer is two-fold. First, the fundamentalist adopts views not because of their truth, but because of a particular power they gain from it. Second, and similarly to the narcissist, they have emotional insecurities that are threatened by disagreement.

The first point would seem so ridiculous to the fundamentalist that he would reject it a priori. He would argue that far from basing his views on securing personal power, he is basing it strictly on God’s Word and therefore has based his views on ultimate truth. But he is horribly mistaken.

With every utterance he reveals that his views secure personal power. He justifies the hatred of a certain group, the promotion of his esteem, his authority, or his glory in the opinion of others, and he releases himself from the need to defend his views with anything other than “God told me,” while maintaining whatever benefit he might gain from his supporters. Self-appointed prophets have a hard time having their prophetic calling called into question.

But beyond the evidence of their own words, the fundamentalist demonstrates a complete inability to grasp the idea that any text—no matter the nature of the text—if written in a human language, requires the reader to make sense of it through a process of interpretation. This process would guarantee perfect truth if there were two perfect entities in place: a perfect transmitter and a perfect receiver, i.e., God and a perfect human reader. As it happens, only one of these two exists.

One’s general ability to understand anything influences how one understands a text. I consider myself a good reader, but set me loose on a legal document, and I’m as lost as a Baptist at Mardi Gras. The fundamentalist, when reading the Bible, seems to think that whatever populates in his mind, by sheer fact that he is thinking it, is true. It’s something like the Cartesian “I think, therefore I am” with a twist: “I think it, therefore its true.” It reveals a hyper-inability to notice one’s own inherent cognitive imperfections. If one’s mind was so perfect that he could perfectly understand Scripture, he would, ironically, be in no need of Scripture.

Reading the Bible is actually an incredibly difficult task, no matter how simple the fundamentalist wants to make it sound. It is so difficult that the historic Church had to hold a series of ecumenical councils to establish an orthodox view of the basic principles of the faith: God’s nature, Christ’s nature, the doctrine of Mary, and a host of others. If there were one, undeniable, certain way to interpret Scripture then every Christian would agree to these basic principles. Instead, these doctrines have been the cauldron of disputes and divisions in the Church since their inception. And before the fundamentalist seizes the opportunity to decry the historic Church of corruption, and thus their need of councils, let him reconcile the fact that the Apostles needed such a council to settle disputes in their own time (Acts 15).

The second point is an obvious conclusion from the first. The person who requires everyone to agree with him, on pain of hellfire, is clearly staving off some deeply held emotional dragons.

Just as the narcissist needs to establish his supremacy to ward off deep insecurities, the fundamentalist is at every point in danger of not mattering. The need to matter—to feel that one’s actual life matches the superman ideal he has constructed in his mind—runs far deeper than some mere popularity contest. For the fundamentalist, his very life depends on it; the abyss of personal ineptitude or uselessness hides behind every disagreement.

This seems evident in most congregations led by a minister of the fundamentalist mentality. One will notice that few if any congregants rise higher in education, leadership abilities, or spiritual insight than the minister. The fundamentalist pastor has a knack for chasing off all threats to his throne. This often results in either put-downs or outright condemnation of higher education. Also, the fundamentalist who is apt in avoiding his own emotional issues will likely condemn mental health counseling. A mentally healthy congregation is a threat to this sort of minister.

Again, this is just a sketch of the issue. If I could offer any advice in dealing with a Christian fundamentalist it would be this: Be kind, be respectful, and change the subject. There is nothing you will say or do that will change his mind, and really, it’s not your job to change it.