Source: Interfax-religion
Natalya Mihailova | 17 October 2016
London, October 16, Interfax - Prayers for Great Britain were lifted up at the liturgy celebrated by Patriarch Kirill of Moscow and All Russia on Sunday at the Russian Dormition Cathedral in London. 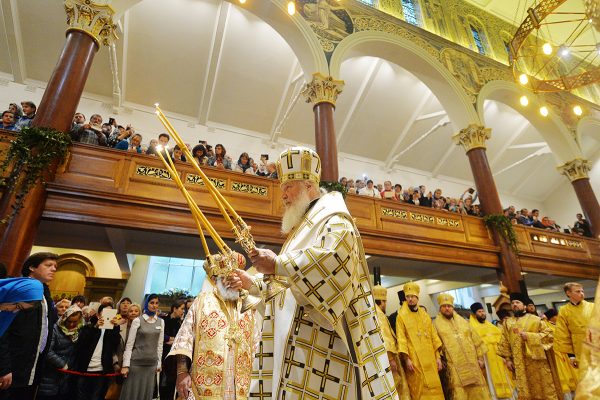 During the service clerics prayed to “all saints glorified in the British land” and proclaimed wishes for long life to “Her Majesty Queen Elizabeth the second, our God saved country and this God saved country.”

Earlier this day, the patriarch consecrated the cathedral, its bells and frescoes after the large-scale reconstruction of the church.

Prince Michael visited Russia many times, he has family ties with the Romanov family and his appearance has much in common with Emperor Nicholas II. He participates in restoring architectural sites in Moscow and Saint Petersburg, helps restoring wooden churches and chairs other charitable programs in Russia.

The patriarch’s four-day visit to London is timed for celebrations of 300 years of the presence of Russian Orthodoxy in the British Isles.