With Christ, In Christ, and Through Christ: On the Feast of the Ascension 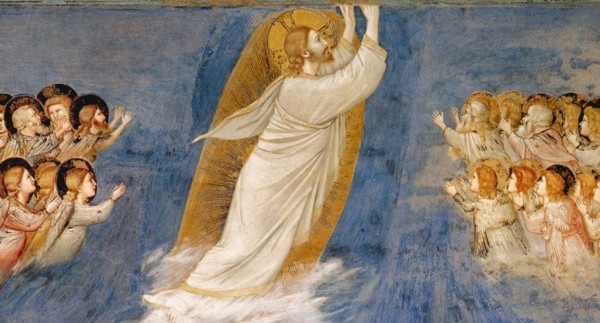 As the cycle of the Paschal season draws to a close, we arrive once again at the Feast of the Ascension of Our Lord. Not only does this day mark Christ’s last day of His physical presence on Earth, but it marks the fulfillment of all things in Christ’s Earthly mission.

At the Annunciation, the Theotokos opens the door to our salvation in Christ through her saying “Yes” to God and to the Archangel Gabriel. At Christ’s Nativity, “God became man so that man might become god,” to use the words of St. Athanasius. Through His death and Resurrection, Christ destroys death. And here, in Christ’s victory at the Ascension, we witness not simply the transfer of Christ from one place to another – from Earth to Heaven. Rather, we see in the Ascension the final revelation of the honor given by God to man, and of man’s potential holiness and greatness. As St. John Chrysostom had said: “If you want to find out how great man is, do not look towards the palaces of kings or the seats of the mighty. Rather, raise your gaze towards the throne of God and you will see sitting at the right of power a Man, Jesus Christ.”

It is often, I believe, that we have a tendency to think of Christ’s Ascension as a purely spiritual event. In other words, we embrace a sort of cyrpto-docetism in thinking of the Ascension. (And “Docetism” is the name given to the heresy which claims that Christ was not truly human, but that He only seemed to be.) When Christ was raised up and seated on the right hand of God, I think that it is often the case, without our even being aware of it, that we think of the Christ of the Ascension as a purely spiritual being, raised up to heaven and leaving his humanity behind like a shed skin. But this is simply not true. When Christ became Incarnate and took on flesh and he took on our humanity not just for a season, or during His time on Earth, but for all time.

And this is the significance of St. John Chrysostom’s quote: “If you want to find out how great man is… raise your gaze towards the throne of God and you will see sitting at the right of power a Man, Jesus Christ.” This is the significance of this feast. For in becoming Man – in becoming Flesh – Christ not only reveals to us the glory of God the Father, but he also shows us the true glory and the true destiny of humanity as well. Christ ascends into the clouds in order to raise up our fallen nature to the great heights of Heaven.

God created man from the dust, and the dirt, and the ashes of this world. From this very basic clay of the Earth, God formed and fashioned man, and He formed him in the image and likeness of God, and breathed His spirit into him. And out of this dust and dirt and clay came mankind – the crown of Creation – made in God’s image. And man was given the dignity of Free Will – the ability to choose. Yet we abused our freedom, and we fell back from the glory given us, and we found ourselves outside the Garden, working and toiling in the very dirt and dust from which we were created.

Yet out of love for man, Christ took on our own flesh and humanity. Man is no longer estranged from God, because God became man – a man who walked among us, who ate among us, and who died among us. And yes, a man who rose again from the grave and was Resurrected among us. At the heart of the divine mystery, we find a Man. In the glory of God, we find a Man – the perfect man: Jesus Christ. This is a final and most perfect vision of what we are called to believe about ourselves as human beings, and what we are called to strive for.  With Christ, in Christ, and through Christ, humanity is lifted up to the Heavens, and this is our true destiny, our true goal and glory.

But it is only in humility that we are lifted up. It was only in Christ’s condescension and in Hishumility – His self-emptying on the Cross – that we are lifted up again to glory. All of Christ’s life points to this humility. Christ was born not in a fine palace amongst crowds of admirers. Instead, he was born in a cave in lowly obscurity and poverty. Christ’s death was devoid of glory as well – dying a shameful death amidst beatings, torture and abuse and hanging like a common criminal between two thieves.

Yet it was through His lowliness and humility that Christ was victorious. Similarly, it is only through humility that we are victorious. It is in our own pride and arrogance that we fall and are thrown down. We read this quite clearly in the Gospel of Matthew: “Whosoever shall exalt himself shall be abased; and he that shall humble himself shall be exalted.” There is a sort of humanism which seeks to glorify man, but does so without God. It says: “Man is great, and we can make our own achievements and pursue our own advancements and attain our own heights, and we don’t need God to do this. We’re perfectly fine on our own.” And even if we don’t consciously subscribe to such a philosophy, how often do we, as Orthodox Christians, certainly think this way in our day-to-day thoughts? How often do we, through our pride, rely on what we perceive as our own intellect, our own cleverness, our own achievements, our own looks, or what have you? How often do we feel slighted when people don’t notice all of our supposed good qualities? How often do we feel we aren’t given the respect or credit we feel that we deserve? We are proud of our own achievements and good qualities, yet there is no humility in this. We see such thinking even amongst Christ’s disciples. How many times do we find them arguing amongst themselves as to who among them was the greatest? Yet Christ consistently answers their quarrels by trying to teach them humility: The last shall be first and the first shall be last… (Matthew 20:16)

God is victorious in humility. And man is victorious and finds his true glory only to the extent that he falls down before God and gives God glory. If we claim this glory as our own, we will be humbled. But if we humble ourselves before God and before our brothers, we will be lifted up. The false humanism of this world that ignores, rejects and even actively opposes God is a sham. It sees only in man glorified dust and ashes. In Christianity we find the only true humanism that ever was and that ever will be. It is only in Christianity that the full beauty and dignity of man is realized – man, made in the image and likeness of God and lifted up into the Heavens in the very person of Christ during His Ascension. Man is not made to blindly follow the rules and whims of a cold and utterly transcendent god, as in Islam. Nor is man caught up in the net of illusion, working and striving only to blink himself eternally out of existence (if he is lucky) as in many Eastern modes of thought. Nor is man just a part in a wind-up, clockwork universe started by some “Prime Mover,” deistic God of the philosophers. No. Each and every individual human being has an immortal soul made in the image and likeness of a God who intimately loves each and every one of us. And here, at the right hand of God, sits a Man, Christ Himself, the God-Man, both fully human and fully God, who has a human body, a human mind, a human will and a human nature totally redeemed and glorified. It is in light of this uniquely Christian perspective that C.S. Lewis was able to assert: “There are no ordinary people. You have never talked to a mere mortal.” [From The Weight of Glory, HarperOne, 2001, pp. 45-46.] Yet we can only find our glory in following in the way of Christ’s humility. The Ascension points us to our true nature, and bids us to be authentically human by serving and loving God and our neighbor in all humility, sincerity and charity of heart.

And God, in his love and mercy towards us, promises to send to us the Comforter – the Holy Spirit – to help and to guide us in our spiritual path towards humility. It is a path that nobody walks alone, but that we all must walk together, guided by the Holy Spirit within the Church – the mystical Body of Christ.

Let us, then, strive to remember who we truly are as Christians, and the glory towards which we are all called. But let us never forget that our glory is only found in our humility. Christ has gone on to prepare a place for us in Heaven. May we descend in humility so that we also may ascend in spirit to the banquet feast which God has prepared for us. Let us die to ourselves so that we might find our true life in God. And we pray that God grant to us the Holy Spirit so that we might persevere on the correct path all the days of our life.