Source: CRUX
Despite calls for Patriarch Bartholomew of Constantinople to postpone an historic Orthodox "Holy and Great Council," a spokesman says he can't because the decision to hold the summit in Crete beginning June 16 was endorsed by all Orthodox leaders, and Russia's pullout doesn't make the council any less "valid and binding."
John L. Allen Jr. | 16 June 2016 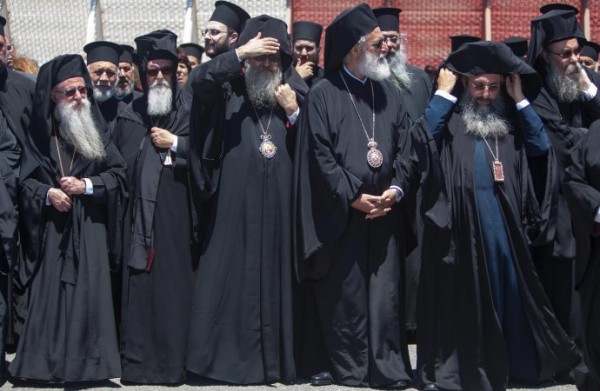 In this Wednesday, June 15, 2016 photo released by Holy and Great Council, Senior Orthodox clergy wait the arrival of Ecumenical Patriarch Bartholmew I at the airport of Chania in the Greek island of Crete.

A spokesman for the Ecumenical Patriarchate of Constantinople insisted on Wednesday that not only is a long-planned “Holy and Great Council” in Crete going ahead, despite decisions by several churches to boycott, but it remains a “pan-Orthodox” summit, the results of which are binding on everyone. 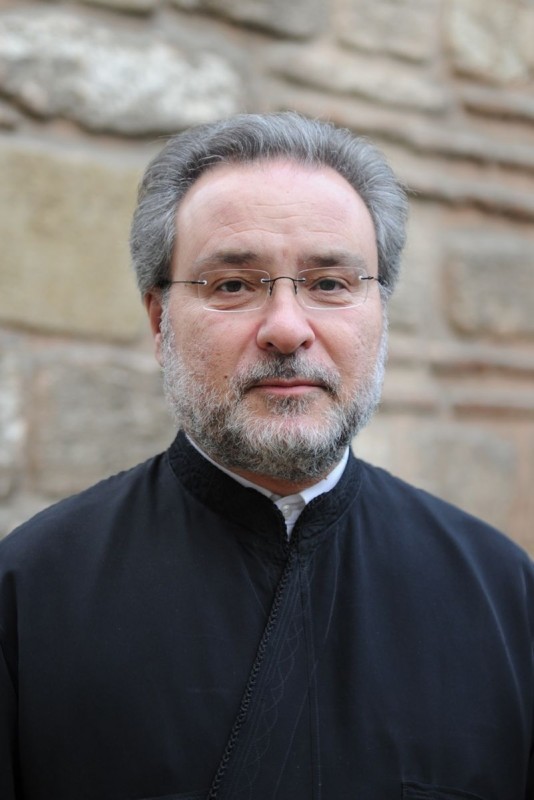 “It is a great council, a pan-Orthodox council whose decisions are binding for the Orthodox Church,” said the Rev. John Chryssavgis, an archdeacon as theological adviser to Patriarch Bartholomew of Constantinople.

He made the statements in an on-line session with reporters from Crete.

The council, set to run June 16-27, was designed to be the first-ever gathering of the leaders of all 14 of the world’s independent, or “autocephalous”, Orthodox churches. In recent days, however, the Orthodox churches of Antioch, Bulgaria, Georgia and Russia have all announced they’re not coming and have called for the meeting to be postponed.

The pullout by Moscow is a special blow, since the Russian Orthodox Church represents roughly two-thirds of the estimated 250 to 300 million Orthodox Christians in the world.

In some cases, the objections are to preparatory documents for the council, in others that pre-existing disputes with other churches have not been resolved.

Bartholomew has been under pressure to postpone the council until there’s unanimity, but Chryssavgis said that Bartholomew doesn’t have the option to do so, because the decision to hold it now was unanimously approved all 14 heads of the Orthodox churches last January.

“No one, including the Ecumenical Patriarch, has right to override that decision,” he said. “I know it’s his dilemma, something he struggles with and agonizes over.”

“No one has right to stand outside the decision about convening the council which was made by consensus, to somehow impose a decision or choose to change their minds about attending,” Chryssavgis said.

Fundamentally, he said, the status of the council remains the same no matter who actually shows up.

“This council is in fact a pan-Orthodox council, convened and taking place based on a pan-Orthodox consensus,” he said. “The fact some churches may not come does not change its pan-Orthodox standing, or the validity or binding nature of its decisions.”

Historically, Chryssavgis said, there’s precedent for councils being recognized as authoritative despite the absence of many important churches and bishops.

“There have been councils in past attended by very few bishops or churches, because of various circumstances,” he said. “This council will be the largest, most representative council in the history of the Orthodox Church.”

“In that respect,” he said, “it truly is a ‘great’ council, greater than any individual synod of one of the sister churches.”

Many Orthodox observers say that privately, some bishops are concerned that the council will endorse progressive positions on contentious issues, such as relations with other Christian churches, that don’t represent a real Orthodox consensus.

Chryssavgis denied, however, that the deck has been stacked.

Chryssavgis said organizers of the council are still hoping the churches that have announced withdrawals will nevertheless attend.

“It is our prayer that the churches that committed to attend will reconsider, after they changed their minds at the last minute, literally at the 11th hour, and even beyond,” he said.

“Russia’s decision came just 48 hours before the primates were expected here in Crete with their delegations,” he said. “Nothing’s happened between January and June, and all of a sudden people are changing their minds.”

Bartholomew, Chryssavgis arrived on Crete at around 1:00 p.m. local time on Wednesday, repeating his “prayer and invitation that all the Orthodox churches will be here on Friday with their primates, and on Sunday with their full delegations, to take part in this historic and unprecedented step.”

Chryssavgis argued that disagreements among Orthodox churches the run-up to the council has exposed are precisely why the summit must continue.

“Every council in history has met precisely because there was disunity, because there was a problem or a division, whether it’s theological, administrative, or canonical,” he said. “No council ever met just to have a party.”

“It would be dangerous,” he said, “if we missed this opportunity to take the first step towards conciliarity.”

In response to a separate question from Crux, Chryssavgis said Russia’s overwhelming numbers doesn’t make its absence any more significant than the defections of other Orthodox churches.

“It is no less painful that a small church like Bulgaria or Georgia is not attending than a large church like Antioch or Russia,” he said.

“Numbers, size and power have never mattered in the Orthodox Church. They have never served as a criterion of authority or gravity,” Chryssavgis said. “That would run entirely contrary to any element of conciliarity and communion according to Orthodox theology, tradition, and practice.”

Among the issues to be addressed in the council, Chryssavgis cited:

“Many of these issues,” he said, “have received a local response but have grown to be contentious on a global level, and sometimes divide rather than unite the faithful.”

Chryssavgis argued that holding councils is part of the “stuff” of what it means to be Orthodox.

“It’s been over a thousand years since we met in a council, and over a hundred years since this one was conceived,” he said. “If we’re a conciliar church, this is the only thing we should be talking about, and the only place where we should bring our problems and disagreements.”

"Unity is an objective, not a given," says the Rev. John Chryssavgis, an archdeacon and theological adviser to…