Source: CRUX
"Unity is an objective, not a given," says the Rev. John Chryssavgis, an archdeacon and theological adviser to Patriarch Bartholomew of Constantinople. "It may be there spiritually and liturgically and sacramentally, but to make it visible is hard, painful, slow work, and it takes time."
John L. Allen Jr. | 07 June 2016 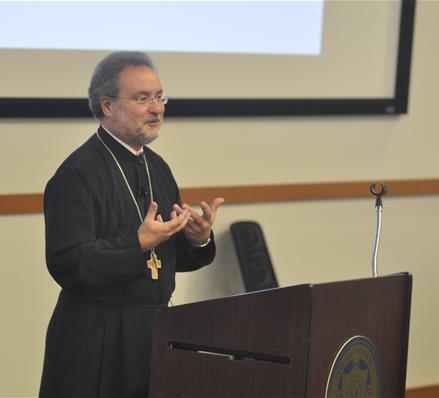 The Rev. John Chryssavgis speaks at Marian University in Indianapolis, Indiana, in December 2014.

Crux spoke to Chryssavgis, a prolific theologian and essayist born in Australia and now a clergyman of the Greek Orthodox Archdiocese of America, by phone on June 6. The following are excerpts from that conversation.

Crux: Is the council still on?

Chryssavgis: The council is still on. I don’t know that there was ever a question it wouldn’t be.

In 1992, the Ecumenical Patriarch established a meeting of all the primates of the 14 Orthodox churches, the latest of which was in January 2016, where the rules and documents for the council were adopted by all. This morning, the Ecumenical Patriarchate met in an extraordinary session of the synod and decided that all the various concerns and complaints, including Bulgaria’s withdrawal, are not based on procedural errors or oversights, and therefore the decisions taken in January 2016 need to be maintained.

If one or more churches doesn’t participate, does that change the theological or ecclesiological status of the council?

The simple answer is no … If one or more churches doesn’t attend, or withdraws during the council, or is not present and doesn’t vote, all the decisions made will still hold and be binding for all Orthodox churches. A Great Council is above and beyond any individual church council or synod … and it remains such even without the participation of one or more church.

Certainly if somebody’s missing, it’s a vacuum we will feel, and we’ll be very, very sorry. I think it will have an impact not just on the council, but also on the church that chooses not to come … If a church chooses to withdraw and not attend, I think it would be a sad reflection of the self-marginalization of that church.

What do you expect to be the big issues?

Keep in mind the purpose of a council, its goal, which is unity. Unity is an objective, not a given. It’s something we aspire to. It may be there spiritually and liturgically and sacramentally, but to make it visible is hard, painful and slow work, all of which take time. Unity comes at the end of the council, not before. It is a consequence, not a condition.

For instance, ecumenical relations with other Christians are taken for granted in the Ecumenical Patriarchate [of Constantinople], but not always in other Orthodox churches. Over the last 50 years we’ve become close with the Catholic Church, and we’ve had tremendous collegial relations with Pope Francis. Those gestures and movements are natural for us, but they’re not necessarily reflective of where the whole Orthodox Church lies.

This council can be crucial in bringing some sort of a unified response, some guidelines in this response, like the Second Vatican Council did for Catholicism. There are probably more differences than similarities between this council and Vatican II, but it could have something like the same impact.

Other issues include, what happens when an Orthodox marries a non-Orthodox Christian, such as a Catholic or Protestant partner?  What does it mean for Orthodoxy to be in conversation, both culturally and in terms of the faith, with Judaism and Islam?

Also, what does it mean for the Orthodox Church to function as a united church, as one church, in the diaspora, for instance in the United States, Western Europe, and elsewhere? In the States, we have all 14 autocephalous churches represented . . . and then some. Do we minister just to our own national group, or to the Orthodox faithful altogether?

Is there a prophetic word we can offer together about our relationship with the rest of the world, including the challenges of the contemporary world, whether these are social, economic, military, or environmental?

Another question is the autonomy of Orthodox churches, and who recognizes someone’s autonomy? In general, the idea is to move towards a more transparent and less political way of putting issues on the table.

How do you do that when there are obvious internal tensions?

There are differences, for instance, within the Church of Greece, where some elements are more and others less ecumenical. In the Church of Russia, Patriarch Kirill and Metropolitan Hilarion are very open to other churches, they’re always at the Vatican or the World Council of Churches, but their own church has conservative voices very critical of Kirill’s meeting with Pope Francis.

These are issues the council can help smooth out, resolving the fears and suspicions that when the Ecumenical Patriarch, for instance, meets the pope, he’s bargaining away or betraying the Orthodox faith. These issues aren’t just inter-Orthodox, but also intra-Orthodox.

We’re meeting precisely because we have differences. If there were no differences, what would be the point?

Where do you think the last-minute jitters come from?

I think what we’re seeing is the typical response of a family that hasn’t gotten together in a long time. When family members come together after a long period of separation and isolation, people are naturally going to wonder, “What will I say to so-and-so? Where will I be sitting? Do people care about my concerns?” Some are going to be afraid their interests will be overlooked.

We have differences that have built up over 1200 years. We’ve been through hundreds of years of persecution under the Ottomans, a hundred years of Soviet oppression, we’re still experiencing persecution and oppression today, as well a refugee crisis, in regions where the Orthodox Church is at home and has been for hundreds of years living side by side with our Muslim brothers and sisters.

All that, and more, creates tensions we have to talk about.

The Orthodox Church preaches that the council is its gut, its heart, its very identity; conciliarity is in our DNA. But we need to prove it, we need to come together and sit around the same table. I hope this is the beginning of many more councils. In the end, the main achievement will be the meeting itself.

You agree then with Pope Francis, who recently had a get-together with the Grand Imam of Al-Azhar and said, “The meeting is the message?”

I undoubtedly agree with that in this case, and it’s certainly been the conviction of the Ecumenical Patriarchate, which has worked to realize this dream for 100 years. The idea is to move together in the church. The Greek work for a council is “synodos,” meaning being on the same journey; and the first step to be on the same journey is to take a step together.

It’s also important to remember that the time after the council will be just as crucial as the event itself, because it’s the period of reception. No rule or structure in the Orthodox Church comes from the top down. It’s the conscience of the faithful, the Church itself at large, which is the ultimate protector and guarantor of Orthodox truth and doctrine.

You’re involved in ecumenical dialogue with the Catholic Church. Does Pope Francis bring something special to it?

I think what Pope Francis brings to the table, which parallels the theological interests of our Patriarch, is a more human face. He understands our two churches can bring much more to the world together in terms of offering hope to the suffering people. By offering a joint voice to a world that’s divided and in pain, we can be much more effective and positive.

When Francis and Bartholomew recently met on [the Greek island of] Lesbos, it was hugely significant and symbolical. There are so many refugees there who literally risk their lives trying to get to civilization and freedom, and their presence there together threw a huge spotlight on the crisis, offering an ethical reminder of how we should be responding.

When they placed a wreath together in the sea, it was a very meaningful expression of unity.

Did you know that in Rome, we jokingly say that Bartholomew is Francis’s “BFF”?

Yes, that’s made the rounds in Orthodox circles as well!

Remember that Patriarch Bartholomew was present at the pope’s inaugural Mass, which was the first time that ever happened in history. There have, in fact, been times in the past when a pope was present in Constantinople for the change of a patriarch, but still never attended. When asked why he went, Patriarch Bartholomew said he felt there’s something different about this man, and he had to be there.

I don’t think it’s by chance that these two people are the leaders of their respective churches at this moment in time. I don’t believe that’s a coincidence.

Despite calls for Patriarch Bartholomew of Constantinople to postpone an historic Orthodox "Holy and Great Council," a spokesman…