Is There a Need for the Council Today? 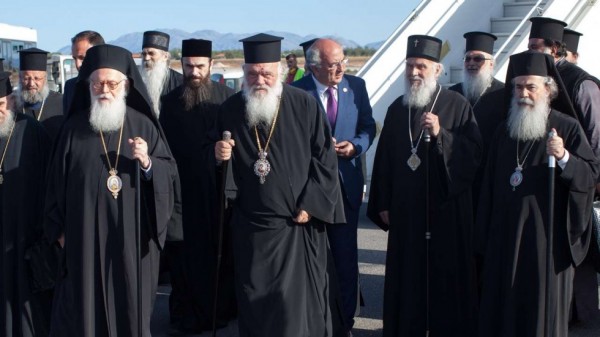 We offer our readers a final chapter of George Ghandour’s book The Road to the Great Orthodox Council, published (in Arabic) by the Patriarchate of Antioch in June, 2015.

Having reached the closing chapter of this book, I am unsure how to evaluate the preparatory work of the council that has been accomplished up to now and on which I have attempted to shed some light in the book’s previous chapters. I am at even more uncertain when I try to answer this question, which I and many others have posed: will the Great Orthodox Council convene at the specified time or will “extenuating circumstances” once more cause to be delayed? I am at yet even more puzzled when I think about the need for convening the council in these circumstances and the prospects that await the Church after it meets, which is to happen soon.

As I try to respond to these questions in an analytical and scholarly manner, my memory is crowded with images of the people I have known closely, some of whom I have studied under, people who worked hard and diligently and employed their knowledge, capabilities, time, talents and money so that this council might be held, that the Orthodox Church might be able to speak her unified word about the challenges that the world is facing and that she is facing, that she might be able to rise up from the prevailing inertia and deadly petrification and speak to the hearts of her children and the world in a living language comprehensible to the people of this age who are anxiously searching for true life.

As I ponder the lives of those fathers who burned the midnight oil preparing for the Great and Holy Council, crisscrossing the Orthodox world to overcome difficulties, opening avenues that no one had previously taken, patiently working so that the Church may speak Christ in the language of the age in which they lived and not in the language of bygone eras, I realize the importance of this conciliar work and what it has realized until today for the universal Orthodox Church. I likewise feel in the lives of these people who “sowed in hope” a call to not waste what has been achieved up to today, to work to preserve the conciliarity of the Church, and to faithfully express it here and now, despite all the difficulties. The fathers who worked until the last moment to prepare for the council’s meeting and who passed before it could meet after fighting the good fight so that it might meet, teach us to not turn back and to continue to strive faithfully for the unity of the Orthodox world. As for those whose dreams were dashed against the rocks of the Orthodox world’s current petrified state, they went back to prayer and teaching and were content to work within their local churches or their narrow circles in order to work for the hoped-for renewal, so they too  teach us the necessity of serious, local work to prepare minds and hearts to bear witness to Christ who is risen and victorious over death and who gathers us into one union, that they may perhaps accept the renewal brought by the Great Council when the time for holding it has come.

I see myself concluding that holding a general council remains necessary for the Orthodox Church because the difficulties cannot affect the nature of this Church, which remains the conciliar church par excellence and because ecclesial conciliarity can only be expressed through practicing it because it is not a theoretical system, but rather life in Christ and in His Church. Perhaps the past preparatory stage, with all the reversals and difficulties that it witnessed and despite the amount of time that it took, made it unambiguously clear that the Church has been able, through the preparatory and preliminary meetings for the Great Council, to undertake joint work of a conciliar nature in matters pertaining to a great number of the questions that one wanted on the Great Council’s agenda.

So with a quick but not hasty glance, it is possible to conclude that the relationship of the Orthodox Church to the rest of the Christian world is no longer an issue of dispute, even if some voices have been raised here and there in objection to some of the practices of other communities and some local churches have from time to time refrained from participating in this or that dialogue. Orthodox participation in the ecumenical movement has, despite some of the difficulties opposing it– for which work is ongoing to create joint solutions according to the logic of dialogue and acceptance of others, insofar as there is no escaping working with other Christians to ready the environment for the hoped-for unity. As for the principles related to Christian witness nowadays, such as freedom, justice, brotherhood, equality and ending racial discrimination, confirmation of their Orthodox understanding has been reiterated and the agreement has been implemented in the world without entering into direct conflicts with the regimes that violate these teachings.

In the matter of fasting, the preparatory work has explained its spiritual and ascetic importance and has stressed the necessity of keeping to its rules, lightening them when the need demands, relying on the principle of economy, in which the Orthodox Church is distinguished. The very same principle of economy was applied in the matter of impediments to marriage, especially mixed marriages.

As for the issue of the calendar, the Orthodox agreed not to argue over it and affirmed that for them, celebrating Easter together remains more important than scientific precision, without shutting the door to future efforts that would permit all Christians to celebrate Easter together.

In the matter of autonomy, the Orthodox agreed that this is an issue that remains tied to the local churches themselves and they defined the conditions and manner of announcing it. They likewise reached an agreement on the concept of autocephaly without agreeing on how to sign the tomos of autocephaly and the content of this tomos. The preparatory work was likewise unable to reach an agreement on the issue of the Holy Diptychs.

Finally, with regard to the issue of the Orthodox diaspora, an agreement was made for a provisional solution requiring the establishment of episcopal assemblies in the countries of the diaspora that come together with the goal of cooperation and coordination under the leadership of the first among the bishops of the Ecumenical Patriarchate in anticipation of the Great Council endeavoring to find a final solution for this issue that is not contrary to Orthodox ecclesiology, which states the necessity of there being one bishop per city.

All these topics that we have reviewed above prove that the preparatory work has realized tangible results and that the universal Orthodox Church, in all the local churches that constitute her, has accepted that which has already been agreed upon at the level of the local synods and at the level of the believing people in general. This leads us to believe that there is no need to convene the Great Orthodox Council in order to adopt decisions that have been accepted in principle by all the churches, but rather, it is possible for the decisions issued by the preparatory conferences to be accepted by the local synods of the autocephalous churches only.

If we pause over the content of the final decision of the Promates of the autocephalous Orthodox churches (March 2014) to convene the council, where it was agreed that each church will be represented by its head and 24 bishops, that the council will treat issues not agreed upon during the preparatory work, and that those issues that have not been agreed upon will be left to a later stage, our conviction grows that there is no need to hold this council at the present time and that convening it will be only a formality for the sake of a commemorative photo and nothing else. This causes enormous disappointment for the generations of Orthodox who have waited for it to be held because it will be incapable of speaking to them or of addressing their concerns and pastoral needs. It will constitute a betrayal of the vision of the successive generations that have prepared so that this council might be a stop along the way to renewal and for leaping forward towards a living Orthodoxy that takes the future by storm, makes it, and renews the world.

It should be added that a lack of participation by all Orthodox bishops in the work of this meeting and reliance on the principle of one vote for each autocephalous church runs contrary to Orthodox conciliar tradition and Orthodox ecclesiology, which states that each bishop is head of the local church (diocese) to which he was consecrated and that the council is the meeting of the churches where the bishops sit in their capacity as pastors of a specific people and guardians of the upright faith of the universal Church. Perhaps this solution, which was invented to maintain the balance between Constantinople and Moscow, constitutes a grave danger for Orthodox ecclesiology, as it effectively cancels the theology of the local bishop, replacing it with a theology of the collectivity of bishops of a single autocephalous church, which is presumed to have homogenous opinions– indeed, one opinion– and this is something that Orthodoxy has absolutely never known in its history.

Perhaps the above, if it is added to the ecclesiological crisis that the Orthodox church is suffering from with regard to the issue of organizing the diaspora, will inevitably lead to postponing the Great Council to a later time and settling at the present time for holding a meeting of the heads of all the churches and their accompanying bishops to declare in celebration what has been agreed upon during the past preparatory period and to launch new mechanisms for activating joint Orthodox cooperation with regard to the issues that are still outstanding on the agenda as well as other issues that may confront the Church in the future.

As for the Great Council, let the matter of its convening be left for a stage when the Orthodox Church is prepared to witness to her faith and her ecclesiology in a manner far removed from considerations of nationalism, politics and power.