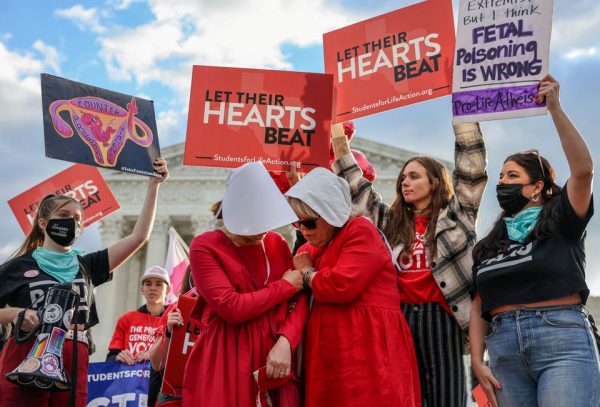 Shortly before the U.S. Supreme Court began to hear arguments in a major abortion dispute out of Texas, a group of demonstrators who oppose abortion joined together outside the stately white marble neoclassical building to pray for the nine justices, listing each one by name.

Hundreds of people in support and opposition to a restrictive Texas abortion law gathered on Monday outside the courthouse on a mild autumn day in the U.S. capital. The justices heard arguments in challenges by President Joe Biden’s administration and abortion providers to the measure, which imposes a near-total abortion ban – prohibiting it after six weeks of pregnancy – and empowers private citizens enforce it.

Some of the law’s supporters cast the debate in religious terms.

The Reverend Patrick Mahoney, chief strategy officer for the anti-abortion group Stanton Public Policy Center, said, “Our strength is local. You can go to every community in the country right now and find grandmas in church basements knitting baby booties or doing bake sales. There’s this collective energy bubbling in our movement right now.”

Regarding the law’s private-enforcement mechanism, Mahoney said, “Is that the way I would have gone? Probably not. But it’s saving innocent lives. Overall I think it’s innovative and creative.”

The law puts enforcement in the hands of private citizens, empowering them to sue anyone who performs or assists a woman in getting an abortion after cardiac activity is detected in the embryo. Individual citizens can be awarded a minimum of $10,000 in successful lawsuits.

Julia Deluce, a coordinator with the group Students for Life, said she was advocating for the rights of “pre-born children,” adding, “They are human. They are part of our species. And they deserve our protection.”