Wonderworking Icon of the Holy Theotokos Destroyed in Kurgan Fire 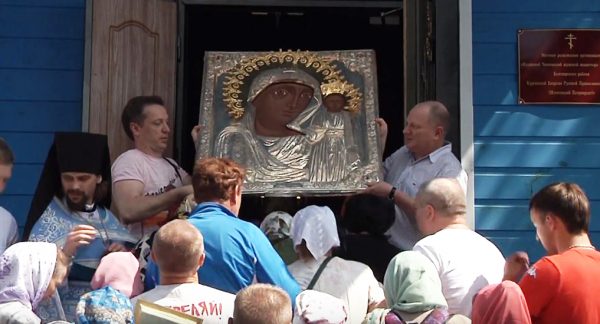 The wonderworking Kazan Icon of the Holy Theotokos of Chimeevo burned down in a fire that took place at the Holy Kazan Monastery in the village of Chimeevo in the Kurgan region on July 3.

“Unfortunately, the icon burned down completely. It cannot be restored,” said Dmitry Brovko to the Interfax-Religion agency, who is the head of the Department of Accounting and Protection of Cultural Heritage Objects.

This information was confirmed by the regional Ministry of Emergency Situations, stating that “the only thing that remained is the metal base, on which it was attached, but the image itself was significantly damaged.”

As it was previously reported, a fire broke out in the Kazan Monastery in the village of Chimeevo in the Kurgan region on Wednesday, July 3.

During the fire, a wooden church of the nineteenth century dedicated to the Kazan Icon of the Holy Theotokos was almost completely destroyed. There the venerable Chimeevo Kazan Icon of the Mother of God used to be kept.

According to preliminary information of the regional Ministry of Emergency Situations, the cause of the fire was the emergency operation of electrical equipment, which was provoked by the air conditioner in the temple. There are no victims.