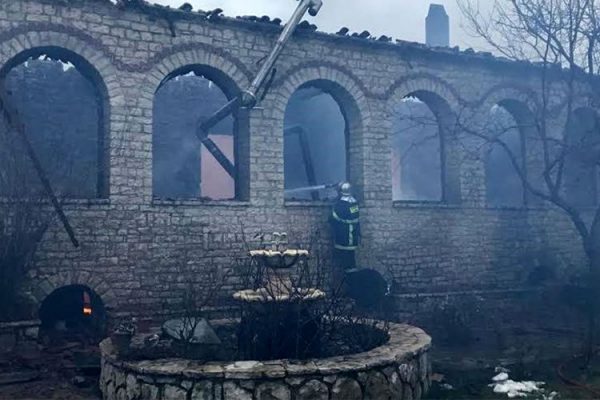 A fire destroyed a section of the ancient Convent of Panagia Varnakova in Fokida, central Greece, after breaking out after 11 p.m. on Sunday.

Unfortunately, the fire ruined relics which had been the pride of the convent and an extremely old icon of the Panagia was completely destroyed. According to firefighters, the blaze began on the roof of the convent and then moved on to destroy a section of the building.

The flames later encircled the convent, and according to Giorgos Kapetsonis, the mayor of Dorida, the blaze posed a serious threat to the nearby forest as well.

Thankfully, no injuries have been reported so far because of the quick actions on the part of firefighters who evacuated the building, saving the lives of the nuns who lived there. The section of the convent that was burned by the blaze dates back to the 11th century.

In January 2017, another fire had threatened the Convent of Panagia Varnakova and burned its library. Sunday’s fire was the third major disaster for Panagia Varnakova if we also consider the earthquake which took place there in 1995.

The Metropolitan Bishop of Fokida, Theoktistos, praised the excellent work of the firefighters, stating ”We are grateful to firefighters for they came immediately and deterred the worse situations which could have taken place.”