Source: DECR
Natalya Mihailova | 18 February 2015
The working group for preparing dialogue between the Russian Orthodox Church and the Coptic Church met on February 9-13, 2015, at the Coptic Church’s conference center at Madinat An Nasr in Cairo. 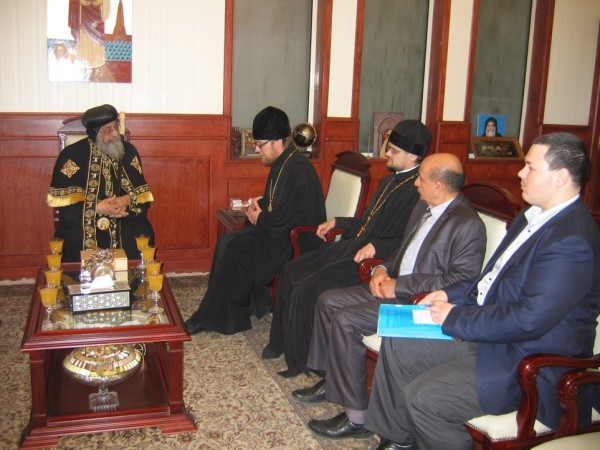 The meeting was held in compliance with the agreement for further development of relations between the two Churches concluded by Patriarch Kirill of Moscow and All Russia and Coptic Patriarch Theodoros II during their meeting on October 29, 2014, in Moscow.

On February 9, the ROC delegation was received by His Beatitude Theodoros II, Patriarch of Alexandria and All Africa, at the Orthodox Monastery of St. George. Archimandrite Philaret conveyed to His Beatitude greetings form Patriarch Kirill and Metropolitan Hilarion of Volokolamsk, noting that the bilateral talks between the two Churches were held in the context of general Orthodox dialogue with Oriental Churches to promote its progress.

Patriarch Theodoros II pointed to the high level of cooperation between the two Churches, which intensified after his recent visit to Russia. They also discussed a number of other matters of mutual concern.

After the audience, the Moscow Patriarchate delegation visited St. George’s Cathedral. Patriarch Theodoros II told them about the progress made in the construction work in the cathedral. The guests sang ‘Eternal Memory’ to deceased Primates of the Church of Alexandria at the Patriarchal burial vault.

Later that day, the ROC delegation met with Coptic Bishop Serapion of Los Angeles, who is responsible for coordinating the dialogue from the Coptic side. They considered concepts for the forthcoming talks and some issues of bilateral relations.

The working group formulated several proposals to be submitted to the Holy Synods of their Churches. Along with theological talks, it is planned to develop cooperation in special issue sub-groups for education, pilgrimage, opposition of Christianophobia and church social service.

On the last day of its work, the working group visited the Coptic Patriarchate to report to Patriarch Theodoros II about the work they had carried out. His Beatitude gave a high assessment to it and expressed hope for further successful development of the bilateral relations. Recalling the warm welcome given to him during his visit to Russia last autumn, His Beatitude asked to convey best wishes to Patriarch Kirill and members of the ROC Holy Synod. They also discussed a number of issues concerning inter-Christian and international relations.