Source: Deccan Chronicle
The works are the first in almost two centuries that will focus on repairing, reinforcing and conserving the structure.
Natalya Mihailova | 21 May 2016
Jerusalem: Christian officials have launched historic restoration work at the Tomb of Jesus inside the Church of Holy Sepulchre, site where tradition holds Jesus was crucified, buried and resurrected. 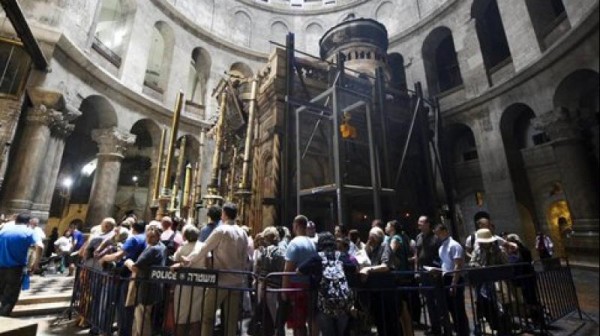 Christian pilgrims wait in line to visit the tomb of Jesus Christ in the Church of Holy Sepulcher in Jerusalem Friday.(Photo: AP)

The works are the first in almost two centuries that will focus on repairing, reinforcing and conserving the structure. Pilgrims will be able to continue visiting the site while the work is underway. It’s expected to last up to a year.

Clerics from the three denominations that oversee the church — Greek Orthodox, Roman Catholic and Armenian — shook hands in a show of unity next to scaffolding erected on Friday. Work is set to begin in about a week. Greek-Orthodox Patriarch of Jerusalem, Theophilos III says the ceremony was a message “that we are delivering what we promised.”