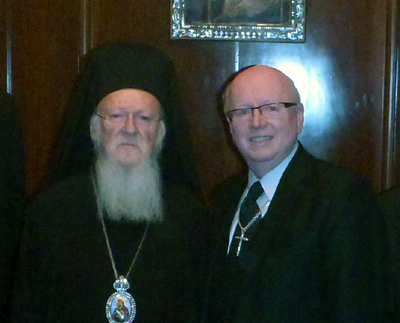 Together they discussed the current crisis and the plight of Christians in Syria, Iraq and the Middle East region.

“This was an important meeting where we able discuss areas of common concern,” said Tunnicliffe.

“We spent a considerable amount of time discussing the current crisis in the Iraq and Syria where thousands of Christians as well as other minorities are at great risk.

“We agreed this was an important moment for the global church to stand united with our brothers and sisters who are facing great hardship.”

A specific emphasis of the conversation was on the importance of responding to the increasing number of refugees, ensuring their protection in the short-term and creating ways for them to later return to their homeland.

The meeting was built on a long-term relationship between the WEA’s Theological Commission and the Patriarch, who is often seen as the first among equal representing some 300 million Orthodox Christians in the world.

The Ecumenical Patriarchate belongs to the World Council of Churches.

In recent years, the WEA and its International Institute for Religious Freedom have also been active in defending the rights of the Ecumenical Patriarch and Orthodox Churches in places where they faced persecution.

Together with leading theologians of the Patriarchate, they started talks on formalizing the dialogue into an in-depth long-term working group that will establish what evangelicals and Orthodox Christians have in common, and where they disagree.

“The meeting with the Ecumenical Patriarch resulted in a similar achievement as the meeting with Pope Francis only a few weeks earlier,” Tunnicliffe noted.

He said, “Persecution of Christians matters to all of us and we can accomplish more, if we work together with those of other Christian confessions.”

Most viewed articles
Growing Cold in Faith after a Few Years in Church: Is This Normal?188
How to Survive in Modern City. 8 Essential Conditions129
Russian Church to Help Provide Lebanon with Vaccines Against Coronavirus88
Bishop Irenei Addresses a Symposium on “The Mother of God in Our Lives” in Los Angeles88
It’s All About the Resurrection – Reflecting on the Season85
Over 20 Thousand People Pray for Discrimination of the Ukrainian Orthodox Church60
Vandals Attack Serbian Church in Croatia53
Appeal for Help from the Church of the Mother of God in Austria52
Volunteers from St George Greek Orthodox Church in Rose Bay gather to cook for the homeless47
We’re Being Robbed1
Most popular authors
Pravmir.com team289
Archpriest Nikolai Markovsky188
Fr. Andrei Gavrilenko129
Archpriest Gabriel Rochelle85
Archpriest Georgy Kharlov52
John Voutos47
Archpriest Stephen Freeman1