Source: RT
Natalya Mihailova | 25 February 2016
Global leaders ought to overcome political dissent and close the ranks in fighting international terrorism as the challenge to mankind at large, the chief foreign spokesman of the Russian Orthodox Church told the media. 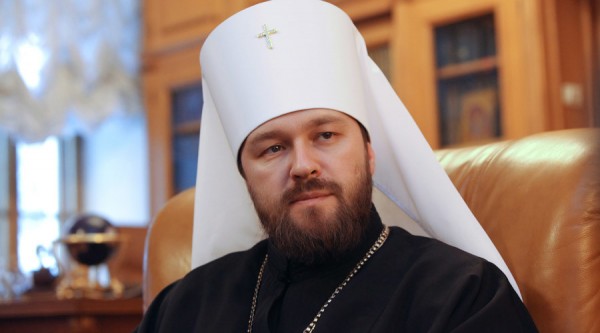 Photo: Vladimir Fedorenko / Sputnik
The unprecedented meeting of the head of the Church, Patriarch Kirill, with his Roman Catholic counterpart Pope Francis in Havana on February 12 is going to have “far-reaching consequences,” the head of the Department for External Church Relations, Metropolitan Hilarion, told TASS in an exclusive interview.

“The word of the pope and the patriarch is addressed to men of all conditions, including political leaders the future of humankind depends upon,” the metropolitan said.

“We expect the message of peace to be heard. That instead of creating various anti-terrorist coalitions, alienated with deep-rooted contradictions and fraught with unpredictable consequences, there would be only one such alliance,” he noted.

Metropolitan Hilarion emphasized that such coalition could not be made up only of politicians.

“Spiritual leaders and other people of good will should go into it.”

The first-ever face-to-face talk between two of the major leaders of the Christian world does not mean that the dialogue has just started, Metropolitan Hilarion stressed.

“It means the dialogue has entered a new stage of augmented intensity.”

Despite all the existing theological disagreements, there is a clear understanding on both sides that “the situation in the world urges immediate collaborative action,” as it was put in the final joint declaration of the heads of churches.

“The meeting was necessary to coordinate our actions in the first place.”

It was important that leaders of world’s two largest Christian churches spoke with a single voice. “So they did,”Metropolitan Hilarion said.

After the rupture between Roman Catholic and Eastern Orthodox Churches in 1054 that is known as the Great Schism, a great deal of differences accumulated, yet the “Christian conscience forces us to seek ways to overcome the discord,” he said, stressing that “This is going to be a long haul.”

“The present day, Christians are divided,” he acknowledged. “We’re in mourning that there is no unity, consensus and Eucharist between the Christians. Considering this [discord] a norm is improper and sinful.”

The joint declaration of the two church leaders mentions helping refugees as a responsibility. Answering a question about the possibility of creation of a kind of intra-Christian Red Cross-type of organization, Metropolitan Hilarion did not completely exclude such a possibility.

“We’ve always been saying we should act united where we can,” he said, stressing that among many fields for joint activities, helping specific dispossessed people in need, like refugees, should be given a priority.

Patriarch Kirill has mentioned that more meetings with the pontiff could follow, although no exact arrangement have been announced yet, which is understandable, since the first meeting was organized in highly-confidential manner.

Metropolitan Hilarion said he “doesn’t have the slightest idea” where and when the next possible rendezvous between Pope Francis and Patriarch Kirill could take place.

The leaders have not entered into correspondence, Metropolitan Hilarion noted, yet they do send each other greetings at Easter and Christmas.